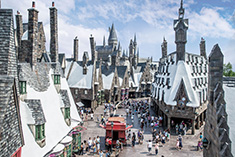 The Wizarding World of Harry Potter, in Osaka, placed third in the ranking.

When the going gets tough, firms that achieve major marketing success are eagerly studied for insights into how they managed to win over consumers despite a business downturn. The most recent case came about in the wake of the April rise in the consumption tax rate, from 5% to 8%.

Nikkei Trendy, a magazine put out by the group that publishes the Nihon Keizai Shimbun, has announced its hitto shohin, a list of the top 30 products and services of 2014.

The annual proclamation—based on data collected at points-of-sale over the previous 12 months—is part of a Nikkei tradition dating back to 1971.

Second on the hitto shohin listing is “Yokai Watch”, a hugely popular video game that has spawned both a television show and spin-off merchandise.

In third place is the Wizarding World of Harry Potter at Universal Studios Japan, which opened on 15 July. This area drew a record number of visitors in the first three months after its opening.

While entertainment-related products and facilities hold the top spots, brands Ariel and Bold, from Procter & Gamble Japan, took fourth place with new types of laundry detergent in the form of dissolving gel balls, instead of traditional powder.

Along with Bold, sales from this new type of detergent grabbed 8% of the market, selling 6.7mn boxes—the sales projected for one month—in just one week.

Other hits reflect changes in market direction and the carving out of new niches. They include croissant donuts (8th); low-priced smartphones (9th); Osaka’s tallest building, Abeno Harukas (10th); and kinetic sand (11th)—originally made in Sweden, it is sand mixed with silicone, which allows it to be moulded into various shapes. 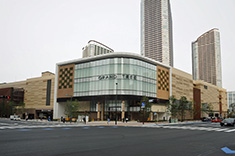 The word on the street is that the Tokyo metropolitan area has a new, trendy spot: the redeveloped area around Musashi Kosugi Station. Located across the Tama River from the capital’s Ota Ward, the area is part of Nakahara Ward, Kawasaki City.

In an annual survey conducted in July by Haseko Corporation, respondents were asked which neighbourhood in the greater Tokyo area had the most residential appeal. Musashi Kosugi was ranked fifth.

Kichijoji in Musashino City was considered the most popular—for the 10th consecutive year—followed by Yokohama, Jiyugaoka in Tokyo’s Meguro Ward, and Shinjuku.

During the immediate postwar period, the Musashi Kosugi area was heavily industrialised. But, since around 2000, the area’s factories have been relocating or closing down. In their place, high-rise condominiums have been springing up, and with them has come an increase in new arrivals, who are projected to reach 21,000 by 2018.

One key factor behind the area’s popularity is improved rail service. In 2010, a new station on the JR Yokosuka Line went into service, enabling commuter express trains to reach Shinagawa Station in approximately 10min, and Tokyo Station in 20min.

Driving the trend towards gracious living are the musako-zuma (an abbreviation referring to “the wives of Musashi Kosugi”).

According to Koji Yamaguchi, a manager at the Yokohama branch of Mitsui Fudosan Co., Ltd., these women are mostly in their 30s and 40s. The average household size is 2.5 people, with a combined average annual household income of ¥10–12mn.

Both in terms of foods and clothing, the musako-zuma’s spending preferences lean towards upscale goods for themselves and their families. Hoping to cater to their needs, the retail chain Ito-Yokado Co., Ltd. opened a 37,000-square-metre commercial complex on 22 November.

Situated midway between the Toyoko and Yokosuka line stations, Grand Tree Musashikosugi incorporates 160 shops, restaurants and other businesses. The new complex will be competing with several existing retailers nearby, including Lala Terrace Musashikosugi and Tokyu Square Musashi-Kosugi.

In the quest to reduce logistics-related costs, more firms are allowing the barriers between different business sectors to drop, enabling collaborative, two-way use of shipping containers.

In the Shukan Economist (4 November), Jiro Kato, a senior researcher at the Mitsubishi Research Institute, Inc., notes that since 2013, a number of firms have agreed to share space in ocean shipping containers, making it possible to trim costs by as much as 30%.

Businesses that have adopted the scheme include agricultural equipment manufacturer Kubota Corporation and other exporters, including Toshiba Corporation, Ito-Yokado Co., Ltd. and Suntory Holdings Limited. It is hoped the reduction in costs will help to boost Japan’s international competitiveness.

Cooperative shipping firms can be divided into two basic groups: those with similar and those with unrelated products. In the first group, for example, Sapporo Breweries Limited and Kirin Brewery Company both operate plants in Hokkaido, located just two kilometres apart.

Despite being business rivals, it makes sense for them to share container space if they are shipping to the same customer.

The other group comprises firms that, despite unrelated products, share container space. Kubota Corporation has teamed up with 21 other import and export firms to reduce the number of empty containers returned to ports.

As cost-cutting efforts had reached their limits under the previous system—with congestion at seaports constituting the greatest bottleneck—the new so-called Container Round Use system is being pitched as the most practical solution.

While not necessarily suitable for all types of firms in all situations, the greater efficiency means more firms are likely to hop on board.