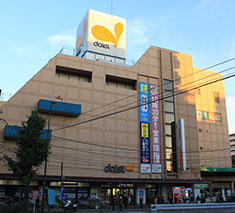 In 1957, the late businessman Isao Nakauchi (1922–2005) opened a humble drugstore in what, within 15 years, was to develop into Daiei, Inc., Japan’s largest retail chain.

In the 1980s, Nakauchi’s face frequently adorned the covers of business magazines, and he was venerated as an entrepreneurial visionary along the lines of other post-war mercantile successes, such as Sony Corporation’s co-founder Akio Morita and Panasonic Corporation’s founder, Konosuke Matsushita.

Nakauchi opened a shop in Honolulu’s sprawling Ala Moana Center, the largest shopping arcade in Hawaii. He also bought a professional baseball team, which moved from Osaka to become the Fukuoka Daiei Hawks.

Now, more analysts are voicing scepticism that the so-called sougo suupaa (general mass merchandiser) model that Nakauchi created with Daiei can ever recover from a prolonged structural slump.

J-CAST News (6 October) recalls that overambitious expansion plans and reckless borrowing halted Daiei’s growth around the time the bubble economy collapsed in the early 1990s. It left in a shambles the “distribution revolution” with which Nakauchi was credited.

Daiei sales were also hurt by the emergence of retail specialists, such as Uniqlo Co., Ltd. and Matsumoto Kiyoshi Holdings Co. Ltd., which cut into two of its most profitable retail sectors: casual clothing and drug store items.

In 2004, Daiei applied for help under the Industrial Revitalization Corporation Act and, by 2007, trading firm Marubeni Corporation had become the business’s second-largest shareholder. But Daiei failed to clear its debts and restore profitability.

By the end of February 2014, Aeon Co., Ltd. had acquired 44.15% of Daiei’s shares. By 26 December, Daiei will be delisted from the Tokyo Stock Exchange and, in January 2015, the firm will become an Aeon subsidiary.

It is expected that Daiei outlets in Hokkaido and Kyushu will operate as members of the Aeon retail group.

But in the Tokyo metropolitan and Kansai areas—where Daiei has a strong customer base—the firm’s presence will be maintained. Over the next three years, ¥30bn has been earmarked for store renovations, with the stated objective of “changing the format to create shops supported by both young people and seniors”.

The decision on whether Daiei’s name will remain on the stores’ exteriors has been postponed until fiscal 2018. But, when Aeon previously absorbed such chains as Yaohan Co., Ltd. and Saty (operated by Mycal Corporation), these names were soon phased out.

In a press conference held on 24 September, Aeon President Motoya Okada explained that business image is important during the acquisition.

“To concentrate on the growth of e-commerce in the future, branding will be a crucial factor. That [the Daiei name] is already known would become a significant liability. As a part of Aeon, Daiei is entering into a stage of name readjustment”, he said. 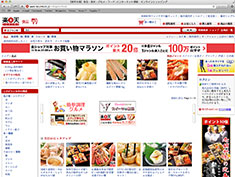 Rakuten is the market leader in online food and beverage.

buyers get savvy about e-commerce

Consumers of both genders, and over a wide age span, are making frequent and shrewd use of online content, reports the Nikkei Marketing Journal (22 October).

The publication conducted its third online nationwide survey, of 11,450 male and female subjects, ranging from 16 to 80 years of age, between 25 September and 1 October.

With the exception of travel-related items (such as tickets), respondents said their purchases of various items via the Internet (including via smartphones) had increased since the previous survey.

The items most cited include tickets to events and gift coupons; content (such as games, magazines, recorded music and the streaming of animated cartoons or films); travel-related items; personal gifts; IT equipment and electric home appliances; and purchases of medication and dietary supplements.

It was found that consumers use online services in conjunction with their shopping activities at retail outlets.

Some 33.4% of respondents said they would check online to ascertain whether a product is in stock before going to a shop, while another 23.3% said that, for example, they confirm the availability of items in different colours and patterns by using the MUJI passport app, supplied by Ryohin Keikaku Co., Ltd.

For IT goods and home appliances, the big three firms used were Amazon Japan, which led the pack with a commanding 71.5%, followed by Rakuten, Inc. and Yahoo Shopping.

Most of the time spent online was devoted to seeking out information—including searches and comparisons—followed by leisure activities, including reading, playing games, watching videos, listening to music and so on.

In third place was shopping; fourth was viewing and updating social networking service content; while fifth was sending emails or chatting with family members and friends. In all cases, the amount of time spent online increased on days off from work. Among females in their teens, more than 50% of time spent online was via smartphone.

The survey also noted that a breakdown appears to be occurring in consumer resistance to purchasing paid content. The fastest-growing social networking service applications were reported to be LINE—use of which doubled over the previous year—Facebook and Twitter.

The market for foreign-language studies continues to grow—from ¥784.8bn in 2012 to ¥808.9bn last year—according to a survey conducted from April to July this year by the Yano Research Institute Ltd. Growth is projected to reach ¥825.9bn by the end of 2014.

Broken down by sector, the study shows that the adult market for foreign-language study grew 102% YoY to reach ¥207.7bn. The youth market is also proving consistently strong. For children and young people, it grew 102.5% to reach ¥95.2bn.

During the same period, the market for e-learning expanded 118.2% to ¥6.500bn. Instruction services by telephone as well as using Skype and similar applications, together with competition via social networks and services that provide content via smart phone is said to be intensifying. Growth this year is projected at 110.8% for a total of ¥7,200bn.

Overall 2012 expenditure for overseas study grew 115.2% to ¥19bn, and this year that market was forecast to continue growing to ¥22bn, a YoY increase of 115.8%. The strong growth reflects the Ministry of Education, Culture, Sports, Science and Technology guidelines concerning the nurturing of global human resources.

This, in turn, has led to expanded support for underwriting study abroad by universities, government ministries and agencies, local governments, as well as various organisations and private corporations.