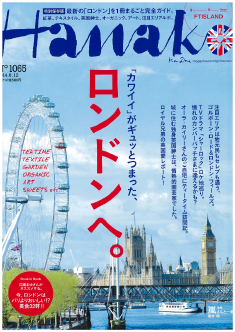 The magazine introduced many aspects of London.

“Actor Benedict Cumberbatch has triggered a boom in British males. One of the spots he likes is Waterloo Bridge. The song “Waterloo Sunset”, performed many years ago by The Kinks, evokes feelings of nostalgia on the part of any Londoner … ”


Thus begins the introductory article in the 12 June issue of Hanako magazine, which devotes most of its content—about 90 colour pages—to introducing London.

Among the wide-ranging topics featured are areas of the city and places to go—including four pages on museums—as well as products to buy, such as brand names, tinned sweets, eco-bags and organic food.

The subject that dominated coverage, however, was one near and dear to the Japanese traveller’s heart: food. Asserting that London is a worthy rival to Paris in terms of gourmet dining, city resident Mayu Ekuni compiled a 16-page centre section that introduces 32 restaurants.

Her list includes establishments offering British cuisine, as well as particular eateries for deli, international and breakfast fare. Establishments that do not require reservations were included.

Tim d’Offay, owner of Postcard Teas in Mayfair, contributed to the feature Tea Time, which is chock-full of close-up shots of mouth-watering pastries, at such establishments as The Connaught, Quo Vadis, Fernandez & Wells and The Delaunay.

While focusing on the sort of topics that are arguably most likely to appeal to visiting female tourists from Japan, other sections seek to provide a broad view of British society from a variety of perspectives.

A short essay titled “England and Community” focuses on the Dalstone Eastern Curve Garden; another provides a brief explanation of the public’s attitudes toward the Royal family.

A spread featuring the UK’s home appliance industry carries interviews with two female engineers working in the design and R&D sections of Dyson Ltd., the vacuum cleaners and fans of which are well known to Japanese consumers.

The magazine also devotes space to Sherlock, the British TV series—which has been broadcast in Japan—starring the aforementioned Cumberbatch.

Along with shots of the actors who portray Sir Arthur Conan Doyle’s super sleuth and his companion, Doctor Watson, is information for visitors interested in The Sherlock Holmes Museum at 221b Baker Street, The Landmark Hotel and St. James’s Park.

For the past year or so, several firms have been hit with the stigma of being called burakku kigyo (black firms). The term typically refers to firms that pay low wages, demand long working hours without overtime compensation, and tolerate or encourage “power harassment” among their workers.

Given the current state of the economy, with part-time workers in increasingly short supply, the stigma is one that firms are desperate to avoid. Workers who know this, reports the Nikkan Gendai (18 July), often threaten to wreak havoc as they metamorphose into “monster workers”.

An organisation called Ashita no Chiimu (tomorrow’s team), which assists firms in conducting employee assessments, says that, since the start of the year, it has been inundated with consultation requests from clients.

According to a personnel manager at Ashita no Chiimu, workers are most likely to behave like monsters when assigned to departments other than those they want or expect to join, and no amount of explanation or caution can convince them to act otherwise.

If they are given warnings about, for example, spending too much time in the toilet cubicle or sending private emails via their mobile phones, they show an attitude of defiance.

Monster workers’ self-centred attitude is evident from such typical requests as: “The days set by the firm for training conflict with my summer holiday plans. Please alter the training dates”, and “As I don’t need a company physical examination, please give me the amount that would be paid”.

Such workers may also say, the article reports, “I come to work on an expensive road-racing bicycle, so I’d like to have my own designated parking space”.

One female employee refused to show contrition when criticised by her boss. Unfortunately, the man lost his temper and loudly exclaimed, “I’ve heard the same thing from other staff! You need to change your attitude!”

The woman had hidden an IC recorder on her person and was able to use the recording of the boss’s outburst in court, where she demanded compensation for his power harassment.

As the problem threatens to grow out of control, a number of consultants have begun holding seminars on the theme of “The right way to get a troublesome worker to resign”. 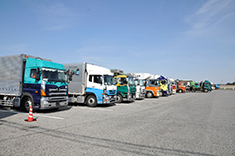 In an expansive study of the changing face of distribution, the Ministry of Land, Infrastructure, Transport and Tourism is forecasting a shortfall of 140,000 lorry drivers by 2015, business magazine Shukan Diamond reported on 5 July. It is believed the principal cause is a change in the system for issuing the requisite driving licences.

Until 2007, all that was required to drive a 5–11t lorry, the so-called chuugata (mid-size) truck, was a standard driver’s licence. However, revisions of the law mean a special licence is required to drive a mid-size lorry, while the examination criteria for oogata (large) lorries is more stringent than before.

As a result, fewer people have shown interest in working as lorry drivers after finishing their secondary education.
Another factor attributed to the current driver shortfall is the introduction of the requirement that lorry drivers be accorded daily rest time of at least eight consecutive hours.

All else being equal, the rest time requirement is said to be having a considerable impact on cost structures, and is resulting in a monthly cut of around ¥20,000 in a driver’s pay.

Studies by the government have found that, compared with those employed in other industries, the annual working time of lorry drivers is an average of approximately 450 hours longer. This statistic places such work in the category of undesirable so-called “3k” jobs—described as kiken (dangerous), kitsui (difficult) and kaerenai (can’t go home).

The various legal changes are discouraging young people from taking up the job of lorry driving. Moreover, while 35% of all drivers are aged 50 or over, only 4% are under 30 years of age.

In a survey of the trucking industry carried out from January to March, 592 respondents said that the driver shortage was already severe; another 38% replied that there was some shortage. When asked to comment on the outlook for the industry, 61% of respondents said it would become more severe or somewhat more severe.

Up to now, increases in transport costs have not reflected drivers’ wages. Thus, unless more effort is made to improve conditions for drivers, the article predicts that soon Japan’s entire distribution system may face disaster.