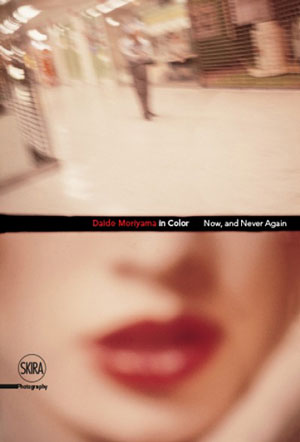 Daido Moriyama is a Japanese photographer noted for his images depicting the breakdown of traditional values in post-war Japan. He was born in Ikeda, Osaka Prefecture and studied photography under Takeji Iwamiya before moving to Tokyo in the 1960s to work as an assistant to Eikoh Hosoe.

In 1968, Moriyama published a collection of photographs, Nippon gekijo shashincho (Japan: A Photo Theatre), that showed darker sides of urban life and less-seen parts of cities. Through the photos, he attempted to show how life in certain areas was being left behind that in others, which had become industrialised. This set the tone for the great body of his work, with his photographs often being blurry and out of focus.

Moriyama has said this of his work: “Black and white tells the story of my inner world: the deepest feelings and emotions I feel every day as I walk though the streets of Tokyo or other cities, like a vagabond wandering aimlessly. Colour describes what I encounter with no filters and I like to record that as my eyes see it. The former is full of contrasts; it’s pungent and totally reflects my loner personality. The latter is polite and thoughtful of others, which is the way I present myself to the world”.

The volume under review is a perfect example of this approach. As the title suggests, the photographs are in colour, but they maintain the grainy and sometimes out of focus style of his black and white photos. Many of those in the book appear unremarkable at first, but with a little contemplation, a pattern begins to emerge, and there is the sometimes arresting inclusion of a nude figure in an incongruous setting. Of these, Filippo Maggia, a visiting fellow at the Royal College of Art, writes:

“Women, as seen by Moriyama: lovers for all of a night, or models, or faces glimpsed on the street or on a bus, or captured on film as they pass by on a sidewalk. Your bodies followed through the fields, or at night through the streets of Tokyo; hands, hair, hips, breasts and derrieres of the women who have been at Moriyama’s side all these years, faithful travel companions, as it were, on an adventure with no beginning and certainly no written ending in store. An adventure just to be lived, then and never again”.

This a handsomely produced—and seriously heavy—book that will appeal to lovers of photography and those simply fascinated by the street life of Japan. Maggia’s opening essay is an added plus.