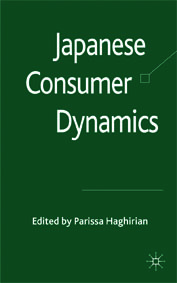 The 11 chapters chart the course of the Japanese consumer market from the high growth post-war decades through to the most recent financial crisis, analysing the groups and trends that have emerged, through the eyes of eight contributing authors. The opening chapter—penned by the editor, an associate professor of international management at Sophia University—covers the “Historical Development of Japanese Consumerism”.

This is followed by an examination of the distinctive elements of Japanese consumer behaviour, including group versus individual, the quality obsession and love of new products. The rise of consumer rights and consumer credit are explored in the third chapter, from the explosion of consumer debt in the 1980s, to the recent establishment of the Consumer Affairs Agency.

Part II, chapters four to eight, looks at Japanese Consumer Groups from the parasite singles and otaku to the increasingly important silver market of the wealthy elderly. The authors set out a detailed analysis of the trends in those sectors, including the spending patterns of the arafo (women aged about 40) and the strata of single consumers that has grown as marriage has begun to occur later and less frequently in Japan.

The chapter on the new rich adds little to the understanding of luxury consumption in Japan, while the section on young male consumers does manage to look beyond the stereotype of the soushoku danshi (herbivore man). The shift of otaku from a kind of deviant sub-culture to the mainstream of Japanese society, with the government now promoting manga and anime internationally, makes up the final part of the section.

The three chapters in Part III look at food, fashion and the rise of mobile phone use. Although the fashion chapter contains an overly long and somewhat irrelevant tangent on the TV show Sex and the City, the book in its entirety provides a useful insight into the Japanese consumer market.