The magazine of the British Chamber of Commerce in Japan
“The ideas that ruins invoke in me are grand. Everything comes to nothing, everything perishes, only the world remains, only time endures.”
—Denis Diderot, from The Salon of 1767. 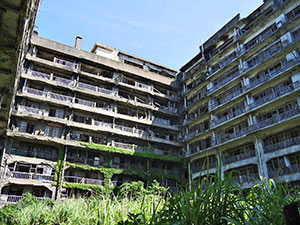 Many of the buildings have been taken over by nature.

Hashima is a tiny island 2km off Nagasaki Prefecture, on the western flank of Kyushu. Just 480 metres in length and 160 metres across, it once housed a thriving mining community of 5,000 souls. In its early 1960s heyday, the island—nicknamed Gunkanjima, or Battleship Island, on account of its shape—boasted a population density nine times greater than that of metropolitan Tokyo, then the most densely populated city in the world.

Today Gunkanjima is uninhabited. The mining equipment and living quarters have been left to crumble and rust in the salty air. Winds gust through gaping windows and rubble-strewn alleys that once echoed with children’s voices. In this modern-day Pompeii, some ghostly apartments still contain black-and-white TV sets, stopped clocks, bottles, cups and faded photos of forgotten stars.

The last miner downed tools just 42 years ago, but the place is already as defunct as the marble fragments that inspired French philosopher Denis Diderot (1713–84) and other thinkers of the 18th and 19th centuries. In Japan and elsewhere, many industrial sites have been remade into business parks or housing developments, but once Gunkanjima’s coal became uncompetitive, the island was done. The facilities remain intact because it wasn’t worth demolishing them.

Recently, this thoroughly modern ruin has become a new tourist destination. In 2015, the United Nations Educational, Scientific and Cultural Organization listed it as a World Heritage site, despite opposition from South Korea, which cited the forced labour of Korean nationals in the mines in the last years of World War II.

The island’s photogenic quality has already been noticed by film-makers. In 2012 it was used as the model for the Dead City, the villain’s lair in the 007 film, Skyfall. Three years later, it became the setting for Attack on Titan, a film based on a dystopian Japanese manga that has sold over 50mn copies. 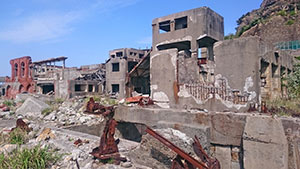 Much of the island is in severe decay.

Ambition and fortitude
Gunkanjima is well worth visiting for anyone interested in modern Japanese history, particularly the breakneck industrialisation of the early 20th century. Even now, the ambition and prowess of the unknown architects and engineers are breathtaking, as is the fortitude of the community for whom the wind-and-wave battered island became a multi-storey hometown, where people were born and brought up, spent their working lives and died.

Coal was discovered on the island’s surface in 1810 and exploited by the dominant Saga clan. But it was not until the closing decades of the 19th century that Japan’s ravenous appetite for coking coal, the basic fuel of the fast-expanding steel industry, justified opening shafts into the seabed.

Brought under the control of the Mitsubishi Group, the island’s area had to be expanded threefold to accommodate the people and machinery necessary for large-scale extraction. The Gunkanjima we see today is largely an artificial creation.

Erosion-resistant stone, imported from China, protected the facilities from the elements. Without these sea walls, life—and profit—would have been impossible. Even so, there were occasions when typhoon-driven waves crashed onto the island, causing widespread flooding, especially in lower-level apartments facing the sea. Needless to say the mining firm’s top executives lived on the highest floors. It was, in every sense, a vertical society.

In its time, Gunkanjima represented modernity and leading-edge technology. An undersea cable brought electricity to the island in 1907. Japan’s first reinforced concrete apartment block was built there in 1916. The island had its own schools, a beauty salon, top-class medical facilities, a pachinko parlour, even a love hotel for amorous couples. The cinema, opened in 1927, is a pile of rubble now, but the gate of a Shinto shrine still perches on the island’s highest point. The only amenity lacking was a crematorium. The dead were taken to a facility on a larger neighbouring island and came back as ashes. 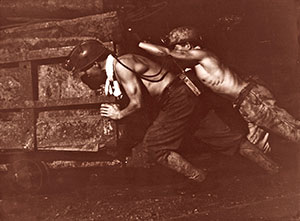 Miners worked in heat of 40°C.

At peak production the miners dug half a million tonnes of coal a year—a modest amount compared with that dug from super pits in the UK—but impressive for such a confined area. The deepest seams were 1,000 metres below sea level and the longest tunnels stretched 2km.

Conditions were gruelling. The elevator that took the miners down to the lower depths was an open-sided cage that plunged 600 pitch-black metres in 80 seconds. Shifts were eight–10 hours in sweltering heat of 40°C, with up to 90% humidity. Just getting to the coalface could take over an hour. For ordinary workers—as opposed to the management, who had a supply of fresh water brought in from the mainland—baths were of treated seawater.

Yet there were compensations. Wages were double and triple the national average. Rent was free and electricity fees minimal. The standard of living can be gauged from the consumer goods left to moulder in the apartments: elaborate hi-fi sets, bulky fridges and washing machines. An undersea phone cable was laid as early as 1938, and by the 1960s the roofs were forests of TV aerials.

Gunkanjima was known as “the island without greenery”, but the residents imported soil from the mainland and created rooftop gardens. As in any Japanese community there were regular festivals at the shrine. Professional entertainers would come to give concerts and there were bars for the miners to relax in after their shifts were over.

Gunkanjima lives on
Why was the island abandoned so suddenly? The standard reason is the energy revolution—which led to the replacement of coal by imported oil—although that seems an inadequate explanation given that Gunkanjima supplied coking coal. Furthermore, the closure came shortly after the first oil shock sent oil prices soaring. Most unusually, the mine was still profitable when it closed.

Then, as now, Japan’s energy policy was in the hands of the Ministry of Economy, Trade and Industry (formerly the Ministry of International Trade and Industry). Decisions could be highly political, such as the choice of an outmoded US nuclear reactor for Fukushima in 1969, a time of worsening trade friction. Still, small-scale deep mining had no future in Japan. Gunkanjima was never going to make it into the 21st century as a functioning mine. After 80 years of operation it had done its job.

Now it has secured a brand-new job, in the heritage business. When Diderot wrote about ruins, he took it for granted they were the ancient remnants of bygone civilisations. It would not have occurred to him to apply the term to constructions in use within living memory. It is a defining feature of our time that it produces ruins of many kinds—architectural, technological and social—as a matter of course. Disruption, discontinuity and obsolescence are baked in the cake.

In that sense, Gunkanjima is not the anomalous leftover of a vanished era, but a perfect symbol of today’s world, with its insatiable appetite for novelty and blindness to what is lost. It is also a useful reminder that everything familiar to us will one day be obsolescent too, ourselves included. As British art critic Dr Brian Dillon writes in A Short History of Decay, “the ruin is a fragment  with a future; it will live on without us”.