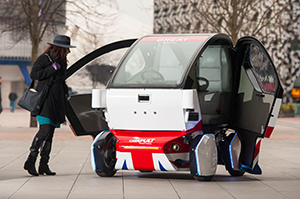 The British presence at the Society of Automotive Engineers of Japan (JSAE) annual congress and exposition goes back over a decade, but this year’s offering was different.

The UK stand could not help but attract attention, having been branded to reflect the UK government campaign, Innovation is GREAT, that had been launched in March by Prince William, The Duke of Cambridge. With interest piqued, delegates spoke to firms showcasing their revolutionary technology and organisations promoting investment in the UK.

Held on 20–22 May at Pacifico Yokohama, the business-to-business event provided an opportunity to showcase the latest research in automotive engineering through lectures and exhibits. This year the congress attracted more than 5,000 participants, while the exposition involved about 500 exhibitors and drew some 86,000 visitors.

“With a goal of promoting the UK as the automotive investment destination of choice, we are delighted that this year’s UK pavilion and related conferences were so well attended, attracting participation from key organisations that provide support for R&D activities in the UK”, Natalie Bain, head of investment at UK Trade & Investment at the British Embassy Tokyo, told BCCJ ACUMEN.

“Besides bringing together diverse expertise under one roof, real business opportunities were generated, too”, she said, adding that areas of particular interest in Japan at present are low-carbon, weight-saving and connected vehicle technologies.

Vehicles of the future

Low carbon is not solely on Japan’s radar. A commitment made by governments around the world to produce less carbon, in a bid to combat climate change, is driving the development of new software and hardware for low-carbon vehicles.

Accounting for 3% of GDP and 10% of exports, the UK automotive industry is healthy, but Paul Gadd, programme manager of low-carbon vehicles at Innovate UK—an agency accelerating economic growth—believes the demand for low carbon provides a huge opportunity to boost the industry. 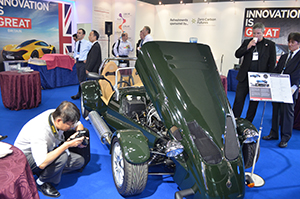 “Traditional internal combustion engines are being pressed and stretched as far as they can, but we are also seeing the introduction of fuel cell vehicles and battery electric vehicles”, Gadd told BCCJ ACUMEN. “The UK government is putting in a lot of money to support the development of these technologies [at home]”.

Some of that funding has been given to the Transport Systems Catapult, a transport innovation centre that uses emerging technology to enable “Intelligent Mobility”—the smarter, greener and more efficient movement of people and goods around the world.

Representatives of the Catapult attended the JSAE events to show a model of their revolutionary driverless prototype, the LUTZ Pathfinder pod. The electric-powered, two-seater vehicles, unveiled in London in February, are to become the first footpath-based driverless vehicles to run in the UK. Trials in Milton Keynes, Buckinghamshire, are due to begin in late summer.

This technology is one of five areas of expertise that have been identified as key British strengths and fields of global opportunity by the Automotive Council UK.

“We are focused on taking fundamental research and support by the research councils and putting it through industry-led projects into industry products that can be sold in the future”, said Gadd. “We are trying to help companies take that risk, and to take advanced ideas from universities and pull them towards the market”.

Each year Innovate UK supports about 50 firms in developing products and services in line with the UK’s automotive technology roadmaps. Seven firms showcased their achievements at this year’s JSAE events.

“The feedback we get [each year] from the companies that attend is that it is really worthwhile, with a lot of contacts made”, said Gadd. 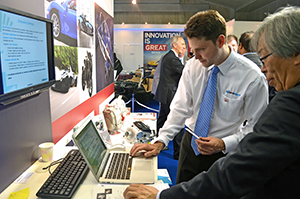 Delegates showcased their technology to attendees.

“It’s an opportunity for companies to showcase their technology: what they have been working on; things that perhaps aren’t quite in the market or are just coming into the market; and an opportunity to share them with potential customers, potential suppliers and potential collaborators”, he added.

One firm that received a warm welcome is Artemis Intelligent Power, which attracted the interest of six Japanese, as well as several European and Chinese firms. Artemis is developing its Digital Displacement (DD) fluid power technology and associated high-efficiency pumps and motors, in what it describes as “a fusion of mechanics, electronics and software”.

Due to recent work to develop manufacturing, the firm is working to appeal to makers of city buses and urban delivery vehicles, including Japanese firms, and was attending the JSAE events to show its industrial pump and hybrid vehicle application. Niall Caldwell, managing director, gave a presentation based on Artemis’s paper “Demonstration of a DD hydraulic hybrid bus”, and was “pleasantly surprised by the size of the audience”.

The firm’s attendance builds on their experience in Japan, having participated in JSAE events in 2013 and 2014. Moreover, its technology is being used by parent firm Mitsubishi Heavy Industries, Ltd. in one of Japan’s offshore wind farms.

“Our technology is to some extent disruptive, particularly in the automotive market, where the paradigm for hybrid vehicle systems is electric”, Taylor said. “Participation in JSAE helps us to test our offering against competitors and to show them that our claims are based on real depth of experience and expertise”.

Making the case for FDI

Pointing out that the UK had the biggest country stand at the event and was allocated a special dedicated afternoon of talks, Gadd said the links between Japan and Britain are something Innovate UK is keen to develop. He believes this can be achieved through not only promoting British technology and collaboration, but also by encouraging Japanese investment in the UK.

“The Japanese market is one of the world’s leading markets in terms of adopting technology, and we think we are complementary to it.

“The UK is, perhaps, a very good European centre for Japanese companies because of [the national] similarities, our long history with Japan, and the opportunity we’ve currently got in terms of funding and support”, he said, pointing out that Innovate UK has £50mn available this fiscal year to support the British automotive industry. 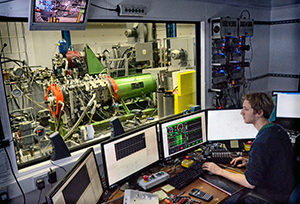 One firm that has received funding, said Gadd, is Nissan Technical Centre Europe in Bedfordshire. It was awarded £5.5mn for eight projects, to which it contributed a further £5.5mn, providing £11mn worth of work, resulting in employment, an economic boost and collaboration with Loughborough University.

Also promoting the benefits of investment in the UK was the Advanced Propulsion Centre (APC), which provides grant funding for propulsion-related projects.

“We considered both domestic and international events and it was clear that a presence at JSAE by the APC was important”, Garry Wilson, director of business development at APC, told BCCJ ACUMEN. “The aim was to meet Japanese organisations that have existing facilities in the UK, or that might in the future, and encourage them to consider conducting their R&D, or more of their R&D, in the UK”.

During the visit, Wilson focused on supporting or leading meetings to drive inward investment. He also spoke on this topic at a forum as part of the congress, at which about 50 delegates asked questions, either after the presentation or in subsequent one-on-one discussions.

“We held a number of meetings before and after the JSAE show with a number of significant Japanese companies”, he said. “These were extremely fruitful and excellent contacts were made. We are confident that this foundation will lead to support of APC projects in the future and have already underpinned inward investment to the UK”.

Wilson said it is likely that many of the firms APC spoke to will be invited to LCV2015, the UK’s largest low-carbon vehicle event, to be held in Bedfordshire on 9–10 September.

“There is a strong correlation between the [JSAE events and LCV2015]”, said Gadd, adding that he talked about LCV2015 with the firms he met and JSAE. Although LCV2015 is in the planning stages, Innovate UK is working with Japanese contacts to deepen existing positive relations.

“There is a strong opportunity and we would like to grow that”, he concluded.