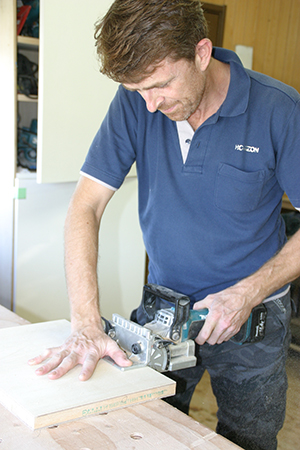 The secret to success, Richard Morgan has discovered, is never to raise objections to the complexity of a job and say it can’t be done. The key, he says, is to make the impossible possible.

“The client has an objective and there are always limitations on any job—time, cost, access—and it seems to me that other craftsmen throw out reasons why they cannot take a project on”, Morgan told BCCJ ACUMEN. “But I’ve always enjoyed taking on that extra layer of challenge to a job.

“I’ve learned to think on my feet, to be flexible and—when you’re working with a bunch of contractors in a confined space and in 30 degree-plus summer heat—how to keep my cool”.

Originally from Plumstead, south London, Morgan set up his firm, Horizon, near Tokyo in 2014. Japan was not, however, where he expected to be working. And carpentry was not a trade he planned to take up.

“I left school early because I wanted to make money, and I never took my A Levels”, he said. “I worked for the Midland Bank for four years, but I was always into music and I started doing some DJing work”.

Out of the blue, that led to a temporary DJing tour of Japan in 1993. The promoters were so pleased with the reaction that they asked him to come back for a six-month tour.

“Against my parents’ advice, I packed up and came to Japan”, he said.

The Tokyo music scene began to pale after a few years and Morgan decided he wanted to do something more hands-on, more creative.

“My dad was a brickie, gas-fitter and plumber, and my brother still fits double-glazing, so there’s a tradition in the family”, he said. Nevertheless, all the skills he has today were self-taught.

“I started by doing odd jobs for Kathryn Milan, an American who ran an antiques business based in a beautiful Taisho-era house in Nishi-Azabu”, he said. “The work was a bit of everything, including repairing old cabinets and basketwork, but that soon grew into making furniture.

“Then someone asked if I could lay a floor”, he added. “I’d never even tried before, but I saw it as a challenge and went with it. And that is how I have learned”.

Morgan’s burgeoning reputation and word-of-mouth recommendations mean he has never had to advertise for work. In fact, the opposite is the problem; there is too much work and not enough skilled and capable craftsmen to meet the demand.

“I’m always shocked at how few people are taking up traditional skills in Japan today”, he said. “Although that does mean there is no shortage of work for reliable and capable craftsmen”.

For Morgan, there can be fewer jobs that are more satisfying than standing back when a project is completed and admiring the finished product. 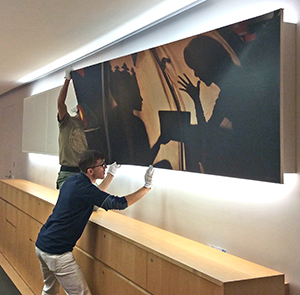 Richard Morgan installs a graphic for a client.

Morgan insists that one of his greatest joys is pottering around in his workshop, less than 10 minutes on foot from his self-renovated home overlooking the town of Hayama, southwest of Tokyo.

“I can’t compete with Ikea on price, but every customer knows that they are getting a one-of-a-kind, custom-built piece of furniture”, he said.

On the day of BCCJ ACUMEN’s visit, he is putting the finishing touches to a corner storage unit, complete with integral fish tank, for an international kindergarten in Tokyo. Child-friendly, the corners are rounded and the colours are eye-catching. Morgan is nearing his “euphoric moment”.

“It’s always a work in progress until its in place and everything is just so”, he said. “But then you stand back and you’ve got it right. And that feels good”.