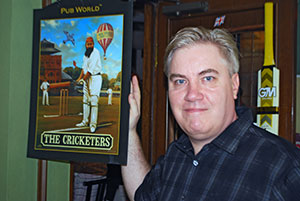 Matthew Anderson is proprietor of The Cricketers in Hyogo Prefecture.

Hyogo Prefecture-based pub The Cricketers is not a typical foreign-run bar in Japan. Its owner, a qualified butcher, produces authentic British sausages and pies, and he has signed a deal with a major Japanese meat firm, which enables his products to be distributed across the length and breadth of the country.

Matthew Anderson, born and raised in Hull, East Yorkshire, gained his butcher credentials in 2000. That same year, he moved to Osaka. He taught English and set up his own English school, an enterprise he still runs. On starting to miss the taste of British sausages, he decided to prepare his own.

“To make my lessons more interesting, I started to make sausages with the customers in my own school”, he told BCCJ ACUMEN. “They then wanted to buy the sausages, and that led to the start of my meat business”.

The introduction of the sausages to the students was, for Anderson, a barometer of how the Japanese palette warmed to such British fare. With customers taking to the food, he thought on a bigger scale: maybe he could sell his products nationally.

In 2010, he approached a Japanese meat firm with national clout.

“The first step was to make a partnership with Sasayama Ham”, he said. “I explained the products that I made, and then we made some test batches together”.

The firm liked Anderson’s sausages, as well as his pork pies, and the partnership was set in stone. Within three months, production of his foods was underway in an existing Sasayama factory, in the town of the same name, about one hour’s drive west of Osaka. But he had to meet certain conditions before the plant started to make his goods.

“I had to go through various food safety lectures to get a Japanese licence to handle fresh meat”, he said. “And I had to get the sausages approved by the government. There was a problem at first, because there was no legislation for fresh meat sausages. Japanese sausages are [similar to] German style, so they are pasteurised”.

Anderson described his situation as a “case study” for the Japanese authorities, owing to their decision to consider, and then allow, the production and sale of fresh sausages. A bank that is a subsidiary of the Japanese government agreed to a low-interest loan, enabling him to buy equipment to produce sausages and pies on a large scale. The sausage machine, he said, has a capacity of 100kg.

Today, trading under his firm’s name, Bangers N’ Mash, thousands of his sausages and pies are sold every month. However, you will not see his packaging in the shops yet, as his Lincolnshire, Cumberland, and Yorkshire sausages are currently sold only to the catering trade.

In time, he would like to see his products sold in supermarkets. With the factory now making the sausages under its own steam, he said he concentrates on making pork pies, as well as looking after the pub and his language school.

On the day BCCJ ACUMEN visited The Cricketers in Takarazuka City, Anderson and his wife Naoe were serving quality ales and, of course, Bangers N’ Mash sausages. Up to 10 individual types of beer are available at any one time in the pub. A keg of beer, Anderson said, lasts about one week. “The theme is craft beer; we don’t sell cocktails”, he added.

Again, wanting to learn the ropes the right way, like he did with the butcher trade, Anderson approached Japan-based Baird Brewing Company, with a view to selling their drinks. He then underwent cellar and beer pump management training at the firm’s Shizuoka Prefecture facility. Unlike in the UK, he said, pub owners in Japan do not have to apply for a licence to sell alcohol on their premises.

Anderson has worked with UK-based David Lishman, a well-known butcher and chef, on a range of sausage ingredients. In addition, he has liaised with a Japanese spice manufacturer to ensure that he sources exactly the right blends.

“I couldn’t import spices from the UK because they have preservatives in them”, he said. “The Japanese government is really strict about what can be brought in. It was too difficult, so that is why I have the spices blended by a Japanese company”.

English memorabilia decorates the walls of The Cricketers, but the trained butcher and publican said that these and other UK trappings are not there simply to woo the customers. Rather, he said, he has assembled the assorted objects simply because they are to his own tastes.

“We are not an English theme pub—and we don’t sell fish and chips”, he said.