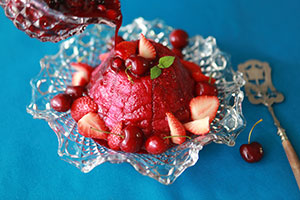 The art of British baking may be underappreciated in Japan but Tamao Sako is working hard to change that. And, while her passion for the UK’s sweets was sparked quite by chance—her husband’s posting to Wokingham in Berkshire—it runs deep.

Sako’s love affair began with a mince pie, presented by her new neighbours who, during countless teatimes over the next 10 years, introduced her to a wide range of traditional cakes.

“My impression had been that British baking was simple and brown—everything being cooked in the oven—while French sweets were white, with fresh cream and fruit”, Sako told BCCJ ACUMEN. “But I was wrong”.

“French sweets are famous in Japan but British sweets are not”, she added. “I want to tell Japanese people the story behind British sweets, and how to make them. There are so many, in such variety—tray bakes, biscuits, puddings to name a few—and the charm is that each one has an interesting history”.

Since she returned to Japan in 2012, the baker, author and teacher has been striving to achieve her goal through her blooming business, The British Pudding, in Osaka. Offering both baking and cookery lessons, many using the recipes of her Wokingham neighbours, the firm welcomes customers from Hokkaido to Kyushu, and classes are regularly fully booked.

“All my customers love the UK”, said Sako, adding that she wants to do all she can to provide opportunities for people to experience and enjoy British things.

Believing that books are one of the best ways to share information on British cuisine with the widest possible audience, Sako has written five, including one that introduces regional dishes and sweets from the length and breadth of the country. Some of these books have been translated, and published in China, Hong Kong, Singapore, Taiwan and South Korea. 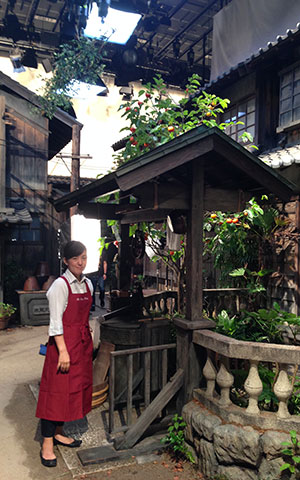 Tamao Sako on the set of Massan, where she was an advisor.

It was reading one of these publications that prompted the producer of NHK drama Massan to bring Sako to the set as an advisor.

Running from September 2014 to March 2015, the popular programme was based on the real life story of Masataka Taketsuru who, in 1918, went to study in Scotland. He married Rita Cowan and, with her, returned to Japan. Through the characters Masaharu and Ellie, Massan explores this story and the couple’s efforts to set up a whisky distillery in Japan.

As the first NHK drama to have a British lead character, there were challenges, not least of which was how to make convincing the scenes of Ellie cooking traditional dishes from the UK.

On one occasion, explained Sako, Ellie was to cook a stew using lamb, but it could not be found; it had to be replaced with beef.

However, Massan’s Christmas scene did go as planned, thanks to Sako. She was on hand to give advice on authentic British details. In fact, the scene was adapted to incorporate additional information she provided.

Complete with coins buried inside, the Christmas pudding that Sako made was lit in the traditional way.

“After the episode, there were lots of calls to the show. I think it was the first time viewers had seen a Christmas pudding—and one that was on fire”, said Sako, adding that the staff were delighted with both the experience and the taste.

“When Massan was on air, the UK, particularly Scotland and London, was often featured on TV”, she added. “That is continuing, which I am happy about”.

While in recent months there have been a number of events in Japan that introduced British food and drink, Sako said she wants to use these products as ingredients to bring UK cuisine to the wider population.

“There are so many British dishes that are not known at all”, she said, adding that she thinks if people were to try them, they would surely like them.

Recalling an occasion in Wokingham when she made a typical Japanese birthday cake with cream and strawberries for a party, she said she was surprised that no one, except her children and her Chinese friends, sampled it; everyone ate the iced one: “When they tried my cake, they said it was delicious. Maybe they just weren’t used to my kind of cake before, in the same way that I wasn’t used to British cakes before”. 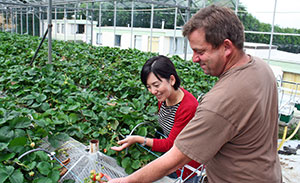 One visit involved checking strawberry crops at sites where jam is made.

According to Sako, overcoming this unfamiliarity of look and ingredients is key for people to enjoy something different.

She sources many of the hard-to-find ingredients for her cookery classes from the Internet, and at events such as the annual British fair at the Hankyu Department Store’s Umeda branch in Osaka. She picks up her must-haves, including Bird’s custard and Coleman’s mustard powder, on her twice-yearly visits to the UK.

While there, Sako was moved by the use of old-fashioned equipment and the established habits that remain unchanged, unlike, she said, in Japan—where traditions are preserved only in certain places, such as Kyoto.

“Old things in the UK are loved, and I think that is great. A Welsh cake made on a griddle stone is delicious; a pie made with a pie bird is lovely; a pudding basin is passed down from generation to generation.

“Chain coffee shops and tearooms coexist, with older people gathering in tearooms every week. I think that will never end”, she added.

On her last trip, she embarked on a new and ambitious project to learn the secrets of making top-quality British produce for her sixth publication.

“I am planning to write a new recipe book that takes a journey around farms and manufacturing facilities in the UK to find more tasty food to introduce to Japan”, she said. 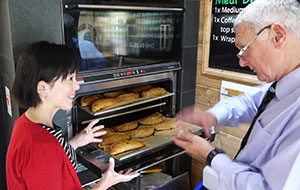 Tamao Sako visited a Cornish pasty maker in the UK.

“I think it is wonderful that in the UK, the size of the company does not matter to the sellers and the customers; it is the taste of their products that matters.

“In Japan, big companies are often the only winners”, she said. “In the UK, if the product tastes good it can be sent to be sold in places such as Fortnum & Mason in London, and it will receive a fair evaluation”.

Sako donned a white coat, hat and Wellington boots to tour the locations of the well-known brands, and was delighted with the welcome she received.

“In Japan, a craft is a secret for producers so these places are closed and you cannot learn how to make products such as these”, she said. “But the British people will teach anyone who really wants to learn their craft. I want to do this, too”.

Sako’s dream is to build on the success of her school in Osaka with a sister school in London, where British people can learn about the cakes that she creates.

Using the example of banoffee (banana and toffee), she explained that she wants to create new cakes—and new words—by fusing Japanese and English.

“I want my new word to bring Japanese and English together and last into the future”, she said. “I am grateful to have encountered the UK. I have fallen in love with the place”.