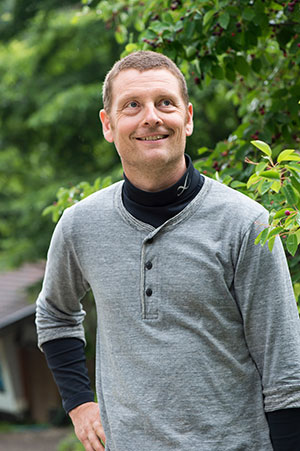 Paul Smither refuses to be rushed, won’t use pesticides or fertilisers and insists that his clients take a long-term view of the horticultural projects they set him. It’s an approach—coupled with the fact that he’s an extremely talented designer with a deep respect for Japan’s gardening traditions—that has placed him in demand in his adopted homeland.

In 2013, for example, the Berkshire-born gardener made it clear that he would only take on the design of a garden—intended to be part of the 30th National City Greening Fair in Tottori Prefecture—if it were to be retained after the event. The garden was to be alongside Koyama-ike, the largest pond in Japan.

Previous host cities had neglected, or removed entirely, gardens designed to encourage the spread of greenery in urban areas, but prefectural authorities in Tottori soon came around to Smither’s way of thinking.

“After a garden has been laid out and prepared, I really like it to be left to its own devices”, Smither told BCCJ ACUMEN.

The 46-year-old adopts a sustainable approach. “When I’m designing a garden, I always try to make sure that it blends in with the surrounding area and, wherever possible, I like to use big sweeps of nature”, he said.

Originally from Maidenhead, Smither spent as much time as possible outside when he was a child, allowing him to develop a deep interest in the natural world. From an early age, there was also a Japanese component to his fascination for the garden, as his aunt was head of the UK’s National Bonsai Society.

“As a kid, I have very happy memories of her having plants everywhere, so I was always in that environment”, he said.

Encouraged by his parents, Smither applied to a course run by the Royal Horticultural Society (RHS) and began hands-on studies at the RHS Garden Wisley, in Surrey. After completing the two-year course, he moved to Longwood Gardens, Pennsylvania, in the US, for another year of getting his hands dirty.

A strong international student body that had been on his course at the RHS inspired his next move. “The students had all talked about their countries and the differences in gardening”, he explained. 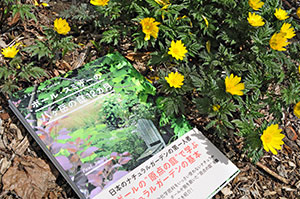 One of 11 books written by Paul Smither.

“I wanted to go somewhere different and I was interested in Japanese plants. When I was young, my father had given me a book of the work of [Katsushika] Hokusai, a wood-block artist, that included a picture of The Great Wave off Kanagawa, with Mount Fuji in the background”.

Smither first arrived in Japan at the age of 19. He joined a landscape gardening business and only intended to stay for a short time.

“That soon changed because I really enjoyed it, right from the beginning”, he said. “For the first time, I tried to learn a new language and found that I could. I got into the culture, the lifestyle—and I was abroad, in a very different place”.

Smither subsequently worked in an orchid sanctuary on the Izu Peninsula and then in an English-style garden designed by the renowned landscaper John Brookes MBE, who has designed and built more than 1,000 gardens during his 60-year career to date.

The project required a lot of replanting and adhering to the original plan for the garden, so Smither decided he would rather “work for and by myself, instead of having to sort out other people’s problems”.

Based in the Yatsugatake mountain range of Yamanashi Prefecture, he set up Garden Rooms Co., Ltd. in 1995. Thanks to Smither’s reputation, the firm did not have long to wait before work came in.
The design and planting of a garden surrounding a large property in the town of Karuizawa, Nagano Prefecture, led to word-of-mouth recommendations, as have projects undertaken for local governments.

The success of the garden design for Tottori was a factor in the decision by the City of Yokohama to contract Smither’s firm to rework the green spaces around the International Stadium Yokohama as part of the Yokka Fair to be held this autumn.

“I want to get people into gardens, so it is often best to keep things quite simple. I like secret gardens—the ones I used to enjoy myself as a kid—and I want them to be full of other sorts of life, like birds and insects, instead of just plants”, he said.

When the weather does not permit him to work outside, Smither fills his time by writing and illustrating books on gardening. His latest of 11 books, titled When, why and how to prune?, offers tips on techniques and timing.

As well as writing the text in Japanese, Smither is responsible for the book’s photos and dozens of intricate cartoon images that are dotted throughout.

“I really wanted to write a book on pruning because I see so many trees and shrubs [in Japan] that have been absolutely brutalised”, he said. “They may need work, but they don’t need that sort of treatment. I just want to show people what they can achieve by some careful pruning”.