In summer, Hakuba village in Nagano Prefecture shimmers with a dazzling array of green in a multitude of shades. As far as the eye can see, the valley is covered in verdant foliage, and mountains zigzag across the horizon.

The atmosphere in Hakuba is perhaps the reason that, for generations, visitors have escaped the oppressive summer heat of Japan’s cities to seek refuge in the valley. They come to enjoy its summer offerings, which include pleasant weather and a lush countryside dotted with mountains, rivers, lakes—and outdoor events.

Ideal setting
The British School in Tokyo (BST) is among those that have beaten a path to Hakuba, in their case to give students a rare opportunity to grow and experience life many miles away from their daily existence in the city.

“Learning takes place everywhere and, arguably, it is that informal learning—where students don’t actually realise that they are learning—that is the most valuable and long lasting”, said Lowly Norgate, communications manager at BST. 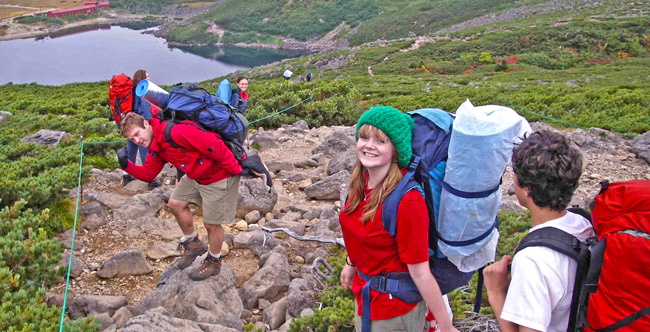 “Adventures in places such as Hakuba are invaluable experiences and add value to the curriculum, especially when you see the immense pleasure and enjoyment on students’ faces when they have achieved something they didn’t think they were quite capable of”.

For a number of years, Hakuba has been an ideal setting for the school’s Duke of Edinburgh’s Award (DofE) challenge, for example.

“Hakuba’s attraction for BST lies not just in the beauty of the place, the kind nature of the local people or in the curriculum activities that the students participate in, it is also in seeing students and staff working together, facing some quite challenging obstacles and overcoming them”, Norgate added.

BST has established strong partnerships with the community in the village, including a collaboration with local institutions, including Hakuba High School.

“One of the real features of the trip is the link with Hakuba High School and the community. Local high school students have in the past joined up with BST’s Year 9 to build rafts, for example. It really provides our students with a sense of being part of the community in Hakuba”, Norgate explained.

To manage its DofE award, BST has partnered with Evergreen Outdoor Center, a guiding and instruction school for rustic activities.

“The DofE Award has been a major part of our education programme here at Evergreen and so has BST’s outdoor programme”, James Robb, the centre’s general manager and lead guide, told BCCJ ACUMEN.

“In working with BST to facilitate that programme, our guides make sure that the students can do the right things safely—be that camping, hiking or any other activity in the mountains, lakes or rivers”.

Hakuba’s numerous activities and pristine nature have made it the kind of destination to which people return time and time again.

“We have done camps in the summer for some time now. It is really fun to see students out there enjoying themselves”, said Dave Enright, Evergreen’s founder.

“Whether it is for two, five or 10 days, you get to see them go through all their emotions—from bewilderment on the first day they get here, making new friends and having a good time, enduring a little bit of sadness and homesickness perhaps, and then back having fun again because there are so many cool things to do”. 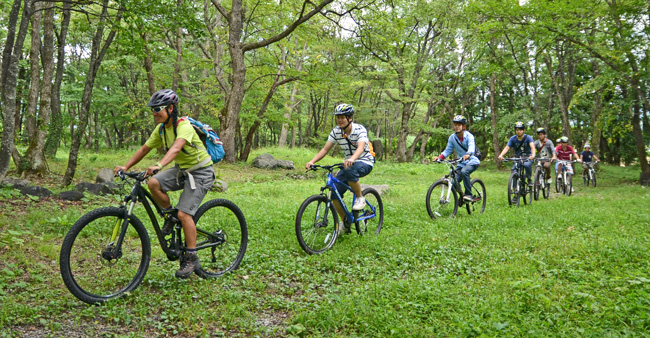 Mountain biking is a popular activity.

Evergreen’s educational offerings include such activities as canoeing, mountain biking and tree climbing with ropes—all of which have elements that teach teamwork. Students also take part in nature bingo with flora and fauna, orienteering, shelter and raft building, and service activities such as forestry and fisheries management.

Golden age
Outdoor activities in Hakuba go back almost 150 years. At that time, green season adventures such as hiking were the main attraction. Some 50 years later, winter sports began to make headway, especially skiing. When the railway came to the region in the late 1920s, outdoor activities really took off.

However, it was with the highly successful 1998 Winter Olympic Games in Nagano that the region’s winter offerings gained international fame—indeed, Hakuba was the site of ski jumping and alpine skiing competitions.

The advent of the Internet, combined with the sharing of information online by entrepreneurs such as Enright and Robb has resulted in the region becoming a mecca for outdoor activities.

Jason Jansen, founder of Ski Japan Holiday, a tour company and travel agency, was one of the first non-Japanese to take advantage of the new era of outdoor activity in the region—he settled there as far back as 1989.

“I started promoting Hakuba to the Western market in 1994, and have been doing it ever since. At that time, there were a number of expats who lived in Tokyo and Osaka that had little knowledge of where to go or what to do in Japan”, Jansen remembers.
“We make a lot of the arrangements and provide logistics support behind the scenes and, often, when the customer gets their skiing itinerary, they may not know that it has been arranged by us”.

Like most non-Japanese, he was attracted to Hakuba because of “the people as well as the environment. There are beautiful mountains, clean air, beautiful rivers and lakes”.

New beginnings
Before Jansen, Enright, Robb and others relocated to Hakuba, many of its locals had established a foothold in the region’s hospitality industry.

“We were farmers before Hakuba had a tourism industry, around 100 years ago. The prevailing work at the time was in agriculture. When skiing became popular, my grandparents began to rent farm rooms out to visitors”, Toshiro Maruyama told BCCJ ACUMEN.

Maruyama is a third-generation hotelier in Hakuba, and the general manager of Shirouma-so, a traditional Japanese inn that caters to Japanese and Western tastes.

“Some of the old wooden support beams can still be seen right there”, he said, pointing to the ceiling of his inn.

Those wooden structures are not the only connection the Maruyamas have with the past. As they still own farms in the area, some of the vegetables served in the hotel’s restaurant come straight from there to the table. What is more, the inn’s restaurant is managed by none other than Maruyama’s mother, who is also the chef.

In 2016, Maruyama won the global manager award at the Luxury Travel Guide Awards, a competition held in the United Kingdom. The award not only recognizes high-quality service, but also sustainable development goals and connections to the local community.

Kazuma Maruyama is a native of Hakuba, and the chief executive officer and director of the Mominoki Hotel. His family-run hotel has a Western atmosphere and a Japanese sense of service. He is one of the many Maruyamas to be found in Hakuba—a fact that hints at the community’s close-knit nature.

While his family’s hotel offers high-end Japanese dining, it also has an English-style pub on site. Adjacent to the pub, a recently opened campsite offers a luxury take on camping—or glamping, as it has come to be known. 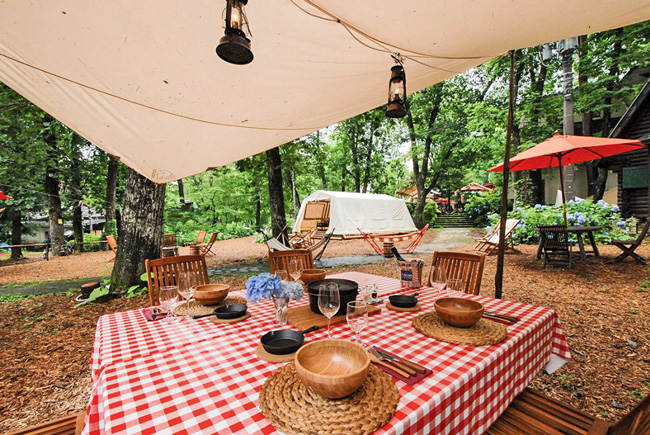 “I personally like camping and barbecuing. That is why we opened the space last year, allowing visitors to stay and barbecue. Our chef can help with food preparation”, Maruyama explains. At night in the camping area, the hotel lights a fire pit where visitors can gather and, sometimes, listen to live music.

Mountain dining
In Hakuba, visitors are spoilt for choice when it comes to dining. Vegetarians have plenty from which to choose, with the Evergreen-run Roots Cafe a popular option. The restaurant, with its air of hipster premises so common in east London, has such offerings as wood-fired vegetarian pizza, falafel wraps, vegan sweets and organic beer.

Fans of British brews are well catered for as well, with Dan Cockburn’s Hakuba Brewing Company offering a selection of ales that can be found in bars and restaurants across Hakuba. One of only a handful of Brits in the village, Cockburn—who hails from the Lake District and graduated from the University of Cambridge—creates hand-crafted ales using the area’s natural mountain water. 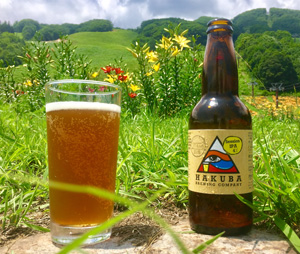 The brewery’s best-selling drink is the Hakuba Pale, which “is an easy drink made of moderately hopped pale, full of floral and citrus aromas and backed up by a rich malt flavour”, Cockburn said.

Cockburn also offers Hakuba Black, “a very hoppy porter with cacao and coffee flavours”; Hakuba IPA, “which is full of punchy tropical flavours and aromas”; and Hakuba Amber, “which has a very full and slightly sweet malt flavour balanced with some spice and pine notes”. The brewery unveiled a new drink for the summer—the Session IPA—that is “slightly dry yet super-easy to drink”.

Whether it is a cold brew to take away the summer heat, a dip in the lake to revive one’s childish sense of fun or a walk up the mountain to inspire a sense of awe, Hakuba remains one of the premiere outdoor attractions in Japan for individuals and families, especially city dwellers.