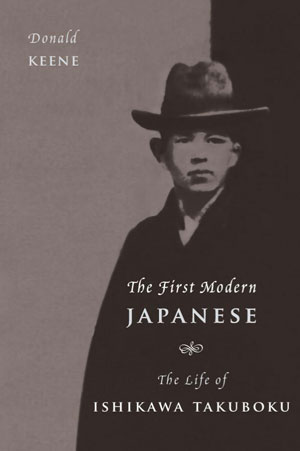 The First Modern Japanese: The Life of Ishikawa Takuboku

Ishikawa Takuboku (1886–1912) wrote many of his best-known poems in the space of just a few years, and his name is familiar to every well-read Japanese. Yet until now, there has been no satisfactory biography of the poet and only a small part of his work has been translated into English. This lively and learned book by Donald Keene, who studied at the University of Cambridge, sets out to change that.

At the time of Takuboku’s death, he was not widely known to the public, but, as Keene writes, “since then, more than a thousand books and monographs have been devoted to his life and writings”. He is now regarded by many as a major figure in modern Japanese literature.

Takuboku wrote tanka, literally “short poems”, which are unrhymed and consist of 31 syllables. His mature work appears to have no obvious influences and he left behind no disciples. His is literally a unique voice. His letters and diaries reveal that he was a tormented individual, and yet some of his poetry has a humorous undertone. His tanka stand out less for their beauty than for their individuality, and Keene suggests his poems are as surprising to us today as they were to their first readers.

The idea that Takuboku was the first modern Japanese was voiced to Donald Keene over 60 years ago by Kosaka Masaaki, a professor of philosophy at Kyoto University. Keene writes: “Although it is difficult to name the qualities that make a poet appear modern, Takuboku’s poems make their modernity clear without needing further explanation”. And he illustrates this:

ware ni nishi >> two friends
tomo no futari yo >> just like me
hitori wa shini >> one dead
hitori wa ro wo >> one, out of jail
idete ima yamu >> now sick

“Surely no earlier tanka poet ever wrote a poem that included a dead man, a man released from prison, and still another who was sick; and Takuboku resembled all of them”.

“Surely no one before Takuboku had used such a simile.”

Takuboku sometimes used modern Japanese when he wrote poems that were not tanka, but all of his tanka were in the classical language. Keene observes that this makes them occasionally difficult to understand, but “Takuboku did not hesitate to use unusual characters or obsolete meanings”.

This is a scholarly study of a commanding figure in Japanese literature, but it is eminently readable and throws fascinating new light on the life and work of a man who is ranked as the first poet of the new Japan.