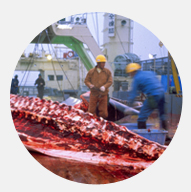 A minke whale is flensed on the Nisshin Maru factory ship in the Southern Ocean Sanctuary.

Japan is likely to abandon its whaling operations in the Southern Ocean within three years, due to economic reality and pressure—with Britain playing an important role— by environmental groups and governments around the world. The term Southern Ocean, created in 2000 by the International Hydrographic Organization, is the fifth and newest world ocean comprising the southern parts of the Atlantic, Indian, and Pacific oceans to completely surround Antarctica.

At the International Whaling Commission meeting in the Channel Islands town of St Helier last July, Parliamentary Under-Secretary for Natural Environment and Fisheries Richard Benyon pushed through measures designed to prevent countries with whaling fleets from “buying” the support of developing nations by providing grants and aid in return.

Patrick Ramage, director of the Global Whale Program for the International Fund for Animal Welfare (IFAW), which has its headquarters in the US, said the British government’s stand was making it more difficult for governments “to hand out money in brown envelopes” and would contribute to Tokyo finally deciding to recall its whaling fleet.

“I estimate whaling in the Southern Ocean will be gone in three years, although coastal whaling will continue”, Ramage said in an interview with ACUMEN in Tokyo.

“But the decision to end whaling will not be taken in Washington, London, Canberra or Wellington”, he said. “It will be taken in Tokyo, Reykjavik and Oslo, because those are the [capital cities of the] last three nations in the world that carry out commercial whaling”. 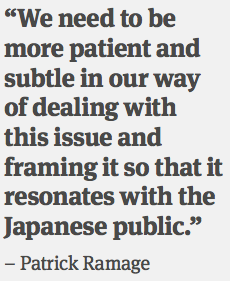 IFAW, which has, at its London offices, 25 members of staff around half of whom are engaged in its key campaigns, eschews the more confrontational approaches of other environmental groups—such as the US-based marine conservation society Sea Shepherd— and prefers to “come to the table with some very positive ideas that can become solutions”, Ramage said.

“We need to be more patient and subtle—and even more Japanese—in our way of dealing with this issue and framing it so that it resonates with the Japanese public.

“There is the economic argument and the matter of the threat to human health from whale meat; then we gently need to introduce the idea that continuing to hunt whales is damaging Japan’s reputation.

“And then we add the idea that money is being spent on a product that nobody wants in the name of science, [and] that nobody needs”.

IFAW believes that Tokyo will halt Southern Ocean whaling in the next few years due to the cost of keeping the heavily subsidised fleet afloat. The nation was already grappling with an economic crisis when the Great East Japan Earthquake struck on 11 March. The cost of rebuilding the Tohoku area and decommissioning the Fukushima Dai- Ichi Nuclear Power Plant will run into trillions of yen.

Greenpeace is another group that has made the point that funds allocated to subsidise a product that very few people want would be far better spent helping the victims of the 11 March disasters.

And the most recent—whalers put to sea before the middle of December for the six-month operation will be even more expensive because, to protect the fleet, the government is dispatching a Japan Coast Guard vessel at a cost to taxpayers equivalent to £17mn.

“It’s unsustainable”, said Ramage. “It will be a decision driven by economics along with growing international pressure, such as Australia’s moves through the International Court of Justice, or subtle but persistent bilateral signals from the US and Europe that it is about time Japanese whaling fleets left the Southern Ocean for good”.

But the indicator that is being most closely watched, Ramage said, is Tokyo’s decision on a new mother ship for the whaling fleet.

The Nisshin Maru currently processes the carcasses of whales that are harpooned by smaller catcher vessels, but it is old and needs to be replaced. A new mother ship would be expensive and the cash-strapped government has not indicated whether it wants to pay for a replacement vessel.

There is also a sense that Japan may be looking to extricate itself from the dilemma while not losing face.

In December 2010, a conference organised by IFAW was opened in Tokyo by Japan’s vice-minister for the environment at the time. The convention was designed to bring together whale- watching firms from around the world to find ways of promoting the non-lethal exploitation of whales.

“We will have better discussions once both sides move beyond the stereotypes of being Japan-bashers or whale-huggers”, said Ramage. “Once we do that, we will find that we actually have a lot of things in common”.