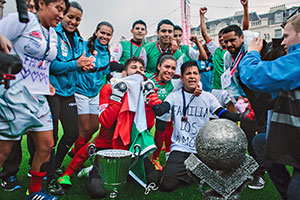 Mexico emerged victorious from the Homeless World Cup in Glasgow

The headlines emerging from the Olympic and Paralympic Games in Rio de Janeiro have largely focused on sporting endeavour and success—hardly surprising, in Great Britain’s case, given our athletes’ remarkable success at the XXXI Olympiad. But there have been equally impressive demonstrations of sportsmanship.

Nikki Hamblin, representing New Zealand in the 5,000-metre race, stopped to assist Abbey D’Agostino when the American runner fell in agony. Earlier in the race, D’Agostino had helped Hamblin to her feet after they had collided and fallen.

Neither runner completed the race, but they did win a thunderous round of applause from the thousands of onlookers packed into the Olympic stadium.

A short while later, the Intern-ational Olympic Committee announced that it was awarding both Hamblin and D’Agostino the prestigious Pierre de Coubertin award. Also known as the International Fair Play Trophy, it has only been handed out 17 times since it was first awarded in 1965.

The images of the two women assisting each other have been shown around the world and help to underline the message of sportsmanship, as well as sport’s ability to foster social change.

And with the next Olympic Games to be held in Tokyo in 2020, there are a number of international organisations that are looking to achieve just that.

Mel Young, president and joint founder of the Homeless World Cup, visited Japan in December 2015 to attend the Third International Symposium on International Development and Peace through Sport. He has since said he hopes the annual tournament might come to Japan within a couple of years. 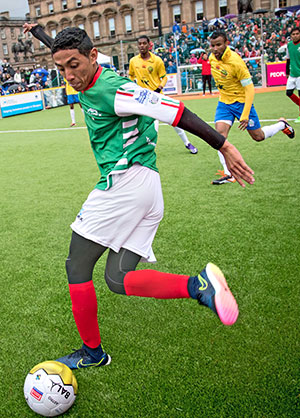 Players wowed the crowd with their skills

“We had some very creative conversations with people here about Japan hosting the tournament, although nothing definite has come out of those talks yet”, he told BCCJ ACUMEN. “At this point, it really is up to Japan whether it wants to go ahead and host the Homeless World Cup, but I certainly hope it does happen”.

This year’s tournament was held in Glasgow, with the teams from Mexico winning both the men’s and women’s competitions. The 2017 tournament will be in Oslo but, after that, a host city in East Asia—which has never staged a Homeless World Cup—would be a welcome development, said Young.

It is, after all, a great deal more than a kick-about among players who are homeless. “Our statistics show that, for the people who get involved, a huge percentage then go on to get out of the situation that they are in”, he said. “Many of them get a job, they get a home.

“Another thing that we do is to destroy the stereotypical view of homeless people, because these are teams from all over the world, [the members of which] become stars in their own right very quickly after they start playing.

“As soon as the game starts, the spectators simply forget that they’re homeless; they are each a human with personalities and abilities and [the spectators] warm to them”. Some 48 men’s teams took part in Glasgow, as well as 16 women’s squads, although Japan did not field a team.

“They have competed previously, but they’re not particularly good because homeless people in Japan tend to be older than elsewhere”, Young said. “But the winning does not matter—although Japan usually wins the fair play award and are big favourites with the crowd”.

Young says there are no more barriers to Japan hosting the Homeless World Cup than any other nation doing so, although homelessness is viewed rather differently in this society.

“Some countries try to deny its existence, while others almost embrace it”, he said. “Look at the United States; it’s a shocking problem there, but they don’t hide it and everyone from the president down knows it’s a problem.

A number of Japanese organisations are similarly attempting to use sport to bring about positive social change. Many were in attendance at the December symposium, which was organised by the University of Tsukuba; the National Institute of Fitness and Sports in Kanoya, Kagoshima; and the Japan Sport Council.

Sport for Smile, for example, encourages people to think about the wider world and people who are less fortunate than themselves, said Mie Kajikawa, founder of the non-profit organisation.

“Our mission is to assist people to achieve their goals by suggesting ways to utilise the power of sport as a global language for [attaining positive change in] society”, she said in a statement. “Our ultimate aim is to serve as a platform to create communities, as well as to link optimal projects that encourage more people to become actively involved”.

The Sport for Tomorrow consortium, under the Japan Sport Council, has around 70 member organisations, ranging from the All Japan Archery Federation to the Urawa Red Diamonds J-League football team, and is building momentum towards 2020.

The programme has three pillars: encouraging international cooperation and exchanges through sport; developing a sporting academy for tomorrow’s leaders; and, under the Play True 2020 banner, promoting a message of opposition to doping in sport.

In addition to strengthening international networks and enhancing dialogue, one of the aims of the December conference was to share knowledge and expertise in the field of “sport for development and peace”, according to Satoshi Shimizu, a professor at the Faculty of Health and Sport Sciences, University of Tsukuba.

And Britain’s experiences in this area are of critical importance to Japan.

“Since NGOs, academic institutions and other organisations in the UK have led initiatives in the field of sport for development and peace for a decade, Japanese organisations can learn extensively from UK organisations, both in terms of research and practice”, said Shimizu, who also chairs the university’s joint masters programme in International Development and Peace through Sport.

“As an academic institution, in particular, we have been implementing great collaboration with universities in the UK in research and education,” he explained, with projects under way with Loughborough, Durham and Southampton Solent universities. 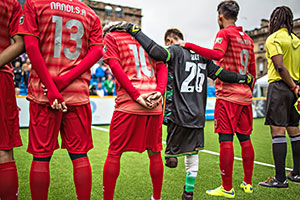 One of the areas in which Shimizu and his colleagues are particularly interested in fostering cooperation is the long-term legacies of major events that serve to assist local communities. The legacy of the London 2012 Olympic Games is widely considered to have been one of the most effective in achieving precisely that, with huge regeneration projects revitalising some of the most deprived areas of East London and giving more people access to state-of-the-art sporting facilities.

“Sport has a long history of playing a culturally significant role in society”, Shimizu said. “Sports such as baseball, football and volleyball have contributed greatly to connecting people and building communities.

“They can serve as tools to bring people, who have different social and cultural backgrounds, together”, he added. “Social change through sport can also include the reintegration of former child soldiers, social inclusion of marginalised populations, empowering of girls in society, and so on”.

Richard Giulianotti, a professor of sociology in the School of Sport, Exercise and Health Sciences at Loughborough University, also took part in the conference and said Japan needs to better communicate the benefits of sport—in areas ranging from improved public health to developing communities, improving cross cultural understanding and empowering women.

“It will be important to provide evidence, to get some very strong testimony from people who have been affected by positive social change, and to show how sport has acted as a catalyst for that”, he said. “If we can do that in Japan, then sport could evolve into a powerful force for change”.