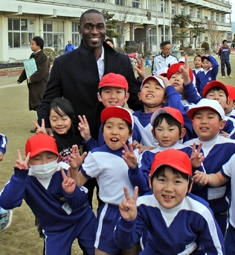 Red was the colour of Kagome Co., Ltd’s booth at the Consumer Goods Forum Global Summit 2013. Red is also the colour of tomatoes—known for being not just delicious but healthy—and are what the firm is about.

The Global Summit, held at Tokyo’s Imperial Hotel in mid-June, provided an opportunity to gain key insights into the challenges facing retailers, manufacturers and their service providers in the consumer goods industry.

“We have been in the tomato business for more than 110 years”, states Kagome’s mission statement. “Not only did we pioneer tomato processing in Japan, today we are the country’s undisputed industry leader in this sector”, it continues.

Another Kagome icon appeared at the event booth: the figure 7,500. This is the number—more or less—of the different seed varieties of tomatoes the firm keeps in its seed bank.

But why have so many types of tomato? According to Hidenori Nishi, the firm’s president, the approach is part of a strategy to keep cultivation as natural as possible.

“Variety is key for quality”, Nishi told BCCJ ACUMEN. “We don’t use any chemicals, additives, sugar or [genetically modified ingredients]. So we introduce our varieties and then train the farmers to cultivate them in ways that use less chemicals”, he explained.

The efficiency stems from tailoring the type of tomato to its growing and marketing conditions, rather than relying on chemicals to do the job.

Red is also the colour of the jersey of arguably the world’s most well-known sports team: Manchester United.

In October last year, Kagome announced a partnership with the Premier League football team to be its official soft drinks partner in Japan. “They chose us because we have a long history—over 100 years—of participating in social activities”, he said.

Kagome and Manchester United have been carrying out their joint Regeneration Challenge Project 2013–2015 to support the reconstruction of the Tohoku region that was devastated by the 2011 Tohoku earthquake and disaster. Through the project, Kagome actively supports children’s well-being and dreams, and communicates the importance of remembering Tohoku. In addition, Kagome and Manchester United in March ran football schools for 160 children who live in the affected areas. 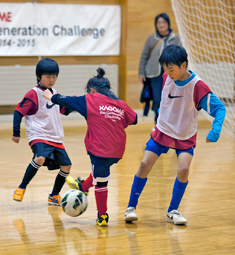 Kagome and Manchester United’s soccer schools aim to give support to children of the Tohoku region.

“The main purpose of the schools is to give support to children of the Tohoku region”, Kagome said in a statement.

As part of the effort, former Manchester United player Andrew Cole and club officials made a trip to the region. “They were very shocked”, Nishi said. “Even two years later, the region was still devastated. The visitors were very moved, so they offered a series of support efforts”.

Another aspect of giving back involves Kagome’s relationship with growers, not just in Japan but also overseas. Many efforts involve promoting eco-friendly growing methods, including using manure rather than chemical fertilisers, the advanced selection of agrochemicals, and an application method based on Kagome’s Quality Standard.

Tomatoes originated in Central and South America. Over 500 years ago, explorers from the West introduced them to Europe where they quickly became a regular feature of Western cooking. Tomatoes reached Asia and Japan in the centuries that followed. Thus, the Japanese in olden times didn’t eat tomatoes.

Today, however, tomatoes are a common ingredient in food here. Kagome, with a history dating back over a century, was an instrumental force in making that happen.

The firm’s roots stretch back to 1899, when Kagome founder Ichitaro Kanie started the successful cultivation of tomatoes in Japanese soil. The firm went on to produce ketchup in 1908, tomato juice in 1933, vegetable juice in 1973, and mixed vegetable–fruit juices in 1995.

Kagome’s vertical integrated system produces numerous tomato-based products for a variety of uses from seed form to branded products. To date, the firm has a bewildering range of processed tomato-based products. Beyond the vegetable juices and sauces, there are pulp-free juices similar to cocktail mixers, and biscuits—just to name a few.

The Japanese market famously tries to push the envelope for processed tomatoes, using them in all sorts of surprising ways. Some of these involve seeing the tomato for what it technically is: a fruit. Examples include confectionary products that combine tomatoes with fresh cream.

Customers of Ginza Cozy Corner Co., Ltd, which operates confectionary and coffee shops and restaurants, can enjoy sweet cream-filled parfaits made from tomatoes.

“[Ginza Cozy Corner] are using a special tomato that we developed,” he explained, referring to just one of his firm’s 7,500 varieties. “The skin of normal tomatoes is usually composed of three layers, but this variety has only one layer, which makes it a bit like a cherry. The skin doesn’t stay in your mouth”, he explained.

Nishi said that such sweet offerings are limited to the Japanese market, but like many Japanese firms, Kagome is gearing up to expand its operations in Asia.

The firm’s first overseas operation was established about 40 years ago in Taiwan to supply to Japan tomatoes as an ingredient. The Kagome Group is now ranked 11th globally in terms of the amount of raw tomatoes used in products.

Asian countries represent a huge potential market. Kagome has two subsidiaries on mainland China, one in Taiwan and Thailand, and another in India.

The average per capita consumption of tomatoes among the Chinese, for example, is about the same as that in Japan: about 10kg per year.

However, there is one big difference. Of all the tomatoes consumed in China, most are eaten raw, such as in salads. In Japan, meanwhile, it’s about a 50-50 split between the markets for raw and for processed tomatoes.

Nishi believes that consumption of tomatoes in Asian nations can be increased by implementing Kagome’s know-how in growing and producing tomato-based products to make the most of their harvests.

Considering the growth of the population in India and Asia, this method will contribute to the sustainability of society. In addition, as health and well-being are becoming very important in these countries, Kagome would like people to eat more tomatoes to ensure a healthy lifestyle.

At home, Kagome is proud of its various technological achievements, one of which is their reverse osmosis. The key technology was patented by Kagome.

“Normally, you need high temperatures but with this technology, we use high pressure with only pure water”, explained Kunihiko Sato, managing executive officer of the firm’s research and development division.

The result is tomato juice with a “raw, fresh flavour”, Sato said. “In addition, the colour comes out nice and bright. So although the juice is made from a concentrate, it’s just like fresh tomato juice”.

Such innovations are underpinned by the roughly 200 researchers employed by Kagome. The firm, which has some 800 products, each year introduces about 90 new ones. The total number of staff at the Nagoya-based firm and its subsidiaries is around 2,200. Last fiscal year, the corporate group posted net sales of ¥180bn; this year, it expects the figure to rise to ¥196bn.

One of the firm’s goals is to get more Japanese people to consume tomatoes. And why not? It’s a healthy fruit, packed with vitamins and other nutrients. What’s more, a growing body of research shows that increasing our consumption of tomatoes removes active oxygen in our bodies, helping to prevent serious illnesses.

Kagome believes that promoting the consumption of tomatoes in Japan is tantamount to contributing to the country’s well-being and longevity.

Tomatoes may not have been a feature of traditional Japanese cuisine, but the firm sees them as being an important part of its future.

“Kagome is trying to introduce different ways of eating tomatoes—not just as juice and tomato sauce—by combining them with Japanese food”, Sato explained.

One idea is to combine tomatoes with miso soup. This might not sound like a usual combination to purists, but then again, if tomato parfaits enjoy good sales, then it seems the sky could well be the limit.