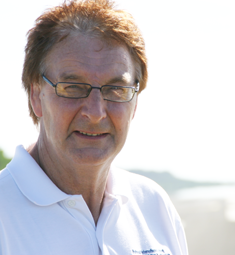 The island of Pohnpei has a state-of-the-art airport that is the envy of the Pacific, thanks to the efforts of Brian Moore, the British manager of the project for Japan’s Penta-Ocean Construction Co., Ltd.

Found between Guam and Hawaii and just one in a string of islands that make up the Federated States of Micronesia (FSM), Pohnpei is about as far as it is geographically possible to get from the village of Saltburn-by-the-Sea, Moore’s hometown on the Yorkshire coast.

Moore’s last trip back to the north-east took 43 hours door-to-door and, he admits, he doesn’t get home as much as he would like. But he has enjoyed the past two decades’ challenges, namely, engineering projects he has worked on around the Pacific and further afield.

“It depends on the project, but there are generally not too many tough parts to this job”, 59-year-old Moore told BCCJ ACUMEN from his office beside the new airport, which accepted its first direct Boeing 767 flight from Japan on 9 June.

“Logistics problems sometimes give me a headache and, if we have a bad subcontractor, they can be difficult to deal with in the right way. But it’s my job to try to find ways to get around that and come out with a good profit”, he said. “A lot of this is about how you approach your job. If you’re only here for the money and you don’t care who you tread on, then you’re not going to succeed”.

For Penta-Ocean, the Pohnpei International Airport projects are relatively small schemes—a mere $80mn in total—but to the people of this isolated state they could be the key to a more prosperous future.

“That is a substantial amount for these islands and we hope we can get permission to start the final stage of the project in August”, said Moore, a former pupil of Sir William Turner’s Grammar School in Redcar, North Yorkshire, and a schoolboy rugby international player who went on to study civil engineering at Aston University in Birmingham.

To an outsider, the project looks remarkably complex.

Until Penta-Ocean built the first airport at Pohnpei in the 1960s, the island could only be reached by ship or seaplane. The firm also constructed the causeway linking the airport island with the mainland. Then, half a century later, the firm was again selected by the FSM government to carry out expansion work that, it is hoped, will bring in more tourists and increase trade opportunities.

The project involved two parallel schemes: one largely funded by the US Federal Aviation Administration (FAA) and the other paid for by government grants administered by the Japan International Cooperation Agency.

Tokyo’s contribution helped cover the cost of extending the runway by about 244m, permitting larger passenger aircraft to land. In addition to the asphalt pavements and shoulders, other items were installed including security fencing, lights, arrival terminal and X-ray equipment. Pohnpei International Airport is also the proud owner of the first baggage carousel system in Micronesia.

Further, the FAA funds permitted the runway to be completely resurfaced with 25,000 tonnes of asphalt, and the installation of new runway shoulders, lighting, signage and windsocks.

Phase two—completed in July 2011—saw the addition of asphalt turnaround bays at each end of the runway, overlaying of the taxiway, installation of additional runway lighting and the augmenting of traffic markings.

But arguably the most eye-catching development of the second phase of the project has been the completion of the gleaming Aircraft Rescue and Firefighting Facility (ARFF).

The ARFF building was 95% paid for by the FAA and the remainder of the cost was covered by the national and state governments. Designed to meet the strict standards of the FAA, the edifice has showers, as well as a gym, laundry, kitchen, dormitory, wheelchair lift and fireman’s pole to allow for quick response to emergency situations. But Moore admits it is unlikely ever to be used.

The upstairs control room gives the emergency crews a panoramic view of the airport, while in the fire engine bays downstairs, two huge, florescent yellow Oshkosh fire trucks are always ready for action.

Discussions are underway on the third and final phase of the project, which would see the construction of a perimeter road, concrete hardstandings for the apron, drainage, embankments, shore protection and a perimeter security fence.

Currently there are only a few flights into Pohnpei each week: the island-hopper flights through the islands terminate at Guam and Honolulu, before beginning their return leg. Theoretically the airport could handle as many as seven flights every day.

“There is scope for ecotourism here and there are some beautiful outer islands, but it has always been difficult to get here”, Moore said. “There is still a great deal to do. More hotels for visitors and an upgrade of the infrastructure across the island are needed if they want to turn Pohnpei into a tourist destination. But this project could be the first step towards that.

“Penta-Ocean has provided that opportunity with this airport, and we hope they can now make it pay off for the people here”, he concluded.