What will the next strategic shock be? When, and where, will it occur? Those were the unsettling questions posed by Sir Robert Fry, former deputy commander of coalition forces in Iraq and newly appointed executive chairman of the British global business performance advisers, McKinney Rogers.

The world has been exposed to three such pivotal events in the past decade: the 11 September 2001 terrorist attacks, the global financial crisis, and the BP oil spill in the Gulf of Mexico.

Of his final, somewhat controversial choice, he said: “You may immediately think this is nothing like as big as the first two. Actually, I think it will be. I think it will mean we will look at carbon extraction in a completely different way”. He added that the disaster could herald the arrival of unprecedented levels of regulation in the US energy industry.

What counts, he explained, is our response to strategic shocks — and that goes as much for businesses as it does for national governments and multinational agencies. 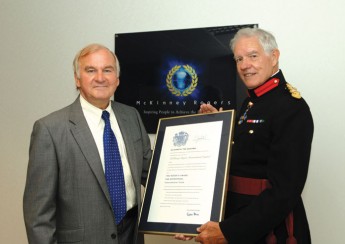 Whatever its source, a strategic shock will divide opinion in the same way as the Iraq war did at the beginning of the decade: while Sir Robert prepared to take British troops into Iraq, his wife marched through the streets of London opposing the country’s involvement in the US-led invasion.

“The increasing complexity of the world that we live in and the fact that I think there is a susceptibility to these upheavals, constantly requires us to reappraise how we operate”, he said.

As a country that has already experienced the economic problems now facing the rest of the world, Japan’s post-war history of rapid growth, deflation and debt crisis serves as a cautionary tale.

“In a sense, there’s a fear that Japan might be seeing something in advance of the rest of the world”, Sir Robert told BCCJ ACUMEN in an interview following the luncheon.

In his new role, the former Royal Marines general can draw on a wealth of high-level military experience to help major firms around the world implement business strategies through McKinney Rogers’ Mission Leadership methodology.

He advised former British Prime Minister Tony Blair on Iraq and, as director of operations at the Ministry of Defence, was responsible for the military strategic direction of Britain’s response to 9/11.
Established 11 years ago, McKinney Rogers now has 11 offices around the world, including in London, New York, Tokyo and New Delhi, and counts WalMart, Zurich Financial Services, Pfizer and Bacardi among its clients.

Sir Robert believes that Japanese firms are more receptive to outside advice, particularly given the clear failure of some — Toyota Motor Corporation being a notable recent example — to create an unbroken “narrative chain” between their corporate vision and its practical application throughout the workforce.

“Where organisations really work is when they have a strategy that is properly analysed and cascaded. It is not just a slogan”, he said. “If you don’t have that, how are you going to get things done?”
“So many organisations have something which they call their vision, which is stuck up on walls around the corporate offices and nobody has the first idea of what it means. Equally, they have no idea of how it is supposed to be interpreted within their organisation.

“Maybe part of the enduring Japanese condition is insularity. To operate on the edge of a continent as part of an archipelago of violence leads to certain attitudes. I think the British are just as prey to those as the Japanese might be. It can, at its worst, lead to a certain insularity of view, and that only becomes apparent when it falls down”.

Although this was his first trip to the country, Sir Robert has a long-standing interest in Japan, and its many contradictions.

“There is the intensely spiritual Shinto sensibility to nature as a counterpoint with a popular culture, like the films of [Akira] Kurosawa and the books of [Yukio] Mishima that are very vivid, visceral and often quite violent”, he said. “This counterpoint between composure and serenity on the one hand, and directness and violence on the other, is something that has always interested me”.

His advice for Japanese business leaders as they attempt to negotiate their way through tough times amounts to a plea to fix the roof while the sun is shining.

“Running large-sale organisations is never easy under any circumstances. Once the going gets tough, as it has in the West recently and in Japan for a long period, we should never underrate the scale of the challenges.

“When the times are good, it feels like you are going in the right direction. It’s when you go through a period of retrenchment that you begin to see some of the problems. When people say they’re not sure what to do, what they’re really demonstrating is their failure to understand the strategic narrative that they’re trying to introduce into their own organisations.

“If they understood that requirement organically, they would know it’s the key to success of their organisation and, perhaps, be less keen to blame [external factors]”.

On a wider level, Sir Robert believes Japan is vulnerable to regional shifts in the balance of power and the ever-present threat to stability posed by North Korea.

“Anything to do with nuclear weapons is profoundly alarming”, he said. “What you have to fear here is irrationality. And irrationality and nuclear weapons make a terribly dangerous combination.”
He conceded it is next to impossible to predict the source of the world’s next strategic shock. “It could be the collapse of the European currency. It could be something around the life sciences genome research, it could be an attack by Iran on Israel … or it could be some mischief that North Korea perpetrates”.

And in a globalised world where non-state actors have taken on a significant and unpredictable role, the only thing of which he could be certain was that the world would again be shaken to its core, “with greater frequency and violence in terms of the consequences they have”.