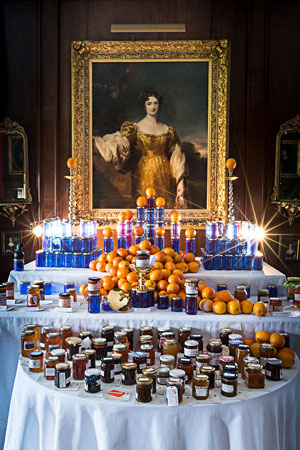 Entries came in from all over the world, including Japan.

With the winners of the 2017 World’s Original Marmalade Awards set to be announced on 18 and 19 March, Japanese marmalade-makers will be looking to surpass their success last year, when they won a crop of new admirers and took no fewer than six gold medals. That prompted the founder of the event to suggest that they would be perfectly at home among the big names in the UK’s quality preserve sector.

“We are delighted to have had so many entries from Japan [in 2016], and the number of gold winners suggests that the people of Japan have a particular understanding of marmalade, which is a sophisticated preserve”, said Jane Hasell-McCosh, founder of the awards, which are held at her home, Dalemain Mansion, in the Lake District.

“It seems to work well with Japanese cuisine, and with many entries using Japanese fruits to produce fresh, new flavours, they could take the British market by storm”, she told BCCJ Acumen.

The awards, which in 2016 marked their 11th year, attracted nearly 3,000 entries, including 160 from outside the UK. Among them were preserves from South Africa, the Bahamas and South Korea. But it was the Japanese entries that really caught the judges’ eyes.

Atsuko Hayashi, owner of The English Kitchen in Itabashi Ward, Tokyo, was returning for the third straight year and improved on the gold award she won in the amateur category in 2015 by claiming no fewer than two golds, a silver and a bronze.

Hayashi’s combination of yuzu, daidai (bitter orange), lemons and navel oranges won the artisan award and was described by the judges as rich in colour, elegant and with “beautiful peel”. The yuzu and daidai juice entry in the amateur competition was “delicious with good texture—an amazing marmalade”, the judges agreed.

“I have been making marmalade as a hobby since I was in my 20s, but only began in earnest about five years ago”, 53-year-old Hayashi said. “A friend who lives in the UK sent me some handmade Seville orange marmalade and it was delicious, so I decided to go to Britain in January 2011 to learn how to make marmalade with different types of citrus fruit”. 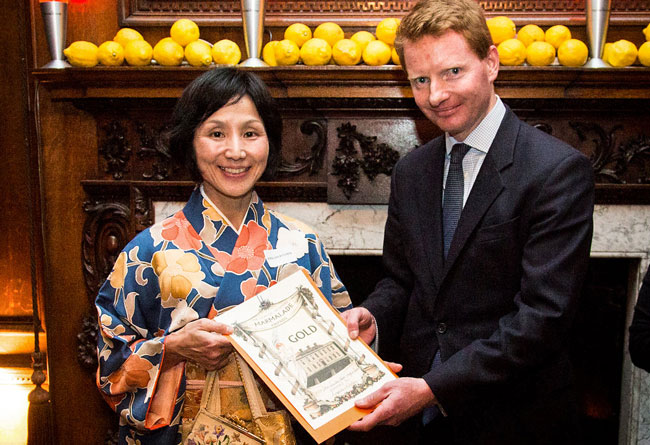 Atsuko Hayashi, owner of The English Kitchen in Tokyo, is presented her award by Tim French, head buyer at Fortnum & Mason.

The secret to a top-notch spread, Hayashi believes, is the delicious and richly scented skin of oranges from Izu, which are both bitter and sour. The other challenge is to set the heat perfectly while the ingredients are being simmered and before the sugar is added.

And, inspired by her victory in 2016, Hayashi quickly began making plans for a new marmalade for this year’s contest.

The Tatsuta family, who set up the Tatsuta Jam shop in Ikeda City, Osaka, in June 2013, also won a gold award for their yuzu marmalade, with judges declaring it “too tasty to resist”.

The victory also ensured that their marmalade was stocked at Fortnum & Mason’s in Piccadilly, London.

“We shouted and jumped up and down when we heard we had won”, said Ikuko Tatsuta, who handles the firm’s sales. “It was just incredible. And then when we heard that our marmalade would be on sale at Fortnum & Mason, it was just an incredible honour”.

Tatsuta’s father, Masahiko, started making marmalade about 25 years ago, using the fruit of the bitter summer orange tree in the garden of his parents’ home in Tokyo. Every year, he would work with his wife to make new varieties and share them with friends and family.

Devastated by the death of his wife in May 2012, Masahiko Tatsuta seized on a proposal from Ikuko to set up a preserves shop. Today, the family firm makes a wide range of jams—including fig, rhubarb and persimmon varieties—but have won a firm following for their marmalades.

“All the fruit and other ingredients are grown in Japan, all are totally additive-free—no colourings, preservatives or chemical flavourings—and we avoid fruit that has been treated with pesticides”, said Ikuko.

Remarkably, the Tatsuta family were competing in the 2016 awards for the first time. Not long after, they had already started work on a new recipe for the 2017 event.

“My mother made strawberry jam and marmalade for the family every year, so I started making it as well, and now I love it”, she said. In addition to winning a gold award for her yuzu marmalade—“well spread, lovely peel in a slightly cloudy gel, clean fruit aroma, light, elegant, tangy taste”, the judges declared—Ono won silver awards for her lime and amanatsu marmalades.

“It’s important to always use fresh fruit that will create a fragrance and preserve the beauty of the fruit”, she said. “I make marmalade carefully and with all my heart—and it’s also important to enjoy making marmalade”.

Another first-time participant, Ono said she has been inundated with requests for her award-winning preserve, but hopes to get to work on a new recipe soon.

Unfortunately, marmalade still lags behind jam as the spread of choice among Japanese families, but Ikuko is confident that it will catch on.

“It’s not so popular here because we Japanese are often given jam or marmalade in our school lunches at elementary school—but it is so bad”, she admitted. “That makes people believe that all marmalade is not nice.

“But Japanese people love to eat and, once we realise that a food such as marmalade can be good, we start to explore and make it better”, she said. “That’s what we enjoy”.