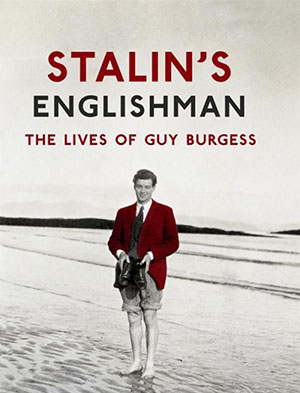 Contradictions and complexities: two words that might sum up the essence of this book’s subject.

Guy Burgess (1911–63) was nothing if not complex. Educated at Eton College and the University of Cambridge, he was variously a BBC radio talks producer, a foreign office official and an agent of the UK’s security service, commonly known as MI5.

He was also at the heart of the Cambridge Spy Ring, acting as a double agent who passed top secret documents and other information to the Soviet Union.

For some time it was believed that Burgess was one of the least effective of the group but now, after some 30 years of exhaustive research, Andrew Lownie has produced a book that documents in immense detail the actual extent of Burgess’s treachery.

The book charts Burgess’s life from his privileged childhood and upbringing through his days as a highly promiscuous homosexual undergraduate at Cambridge and then through the various stages of his star-studded career.

What is surprising is how Burgess always managed to survive, despite his often scandalous behaviour—which was more often than not exacerbated by his excessive consumption of alcohol.

The book describes him as frequently drunk, dirty and dishevelled and yet he was also a man of immense charm who attracted to him a coterie of well-known figures from society and the world of politics, not to mention a whole succession of lovers. Here again is the contradiction that ran through Burgess’s life.

Burgess appears never to have been under serious suspicion by the British (though Moscow Centre had its moments of doubt, as it did over the whole Cambridge Spy Ring who, at times, must have seemed too good to be true). And he was not under threat of arrest when he fled the UK in the mid 1950s, escaping initially to Paris in an attempt to assist his friend and comrade Donald Maclean, who was indeed under suspicion.

Burgess spent his final years in a run down walk-up apartment in Moscow. It was furnished as closely as possible to resemble his old London flat. One drawer of his dresser contained his collection of Old Etonian ties, which he continued to wear. But he was lonely and embittered, pining for England. Ironically, it was an exile largely of his own making.

Unbeknownst to Burgess, the British authorities had determined that there was not enough evidence to prosecute him. He could most probably have returned to the UK and remained a free man, but it suited the authorities to let him believe he was a wanted man and that a return to Britain would see him sent to jail.

Lownie’s book is as thrilling as any spy novel and hugely entertaining. It is also ultimately a very sad record of a privileged life gone to waste.