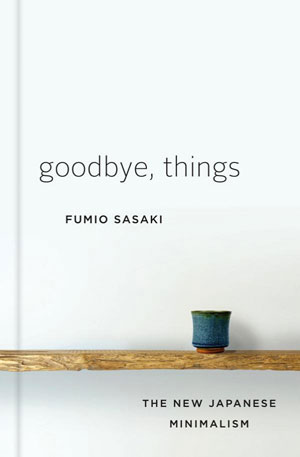 Everything about this delightful book is minimalist, from the simple cover design with its lower case title, to the font used in the body copy. The author does not claim to be an expert and is certainly not an organising guru like the consultant and author Marie Kondo. He claims he is “just a regular guy who was stressed out” and constantly comparing himself to others.

One day—for reasons he doesn’t exactly go into—he decided to change his life. He chose to get rid of everything that he did not absolutely need. The effects, he says, were remarkable. He gained real freedom and a new focus, together with a sense of gratitude for everything around him. The book is an attempt—largely successful—at sharing that experience.

It opens with a series of photographs, including before-and-after shots of Sasaki’s previous apartment. “I couldn’t throw things away … my possessions kept piling up. I lived in that apartment for 10 years, and during that time it seemed like my life had stopped moving forward”.

That is when Sasaki discovered the concept of minimalism, going from what he terms “messy maximalism” to life as a minimalist.

“I said goodbye to almost all my things, and to my surprise I found I had also changed myself in the process”.

Reading about his experience and accepting his tips on how to achieve this change, I found there is a certain appeal to the idea, though I confess I cannot imagine living in a space without books at least—they take up quite a bit of space in our house. Indeed, there’s barely a room that doesn’t have some books in it somewhere.

But the idea of getting rid of things you no longer need and will probably never need again is a sound one, and Sasaki’s argument for doing so is convincing. He demonstrates how the new minimalist movement can not only transform your space, but also enrich your life. He argues that the benefits of a minimalist life can be realised by anyone.

At the end of the book—which is solidly translated by Eriko Sugita—there are two “Recap” sections, which summarise much of what has been explored in previous chapters. These are extremely helpful in choosing whether or not you will say goodbye to things, even if it is just in a general de-cluttering rather than a complete minimalist makeover.

Some are just common sense. For example, “start with things that are clearly junk”. Others have a little more depth: “Differentiate between things you want and things you need”.

Goodbye, Things is an enjoyable book and you do not have to be a convinced minimalist to find much of interest in it.