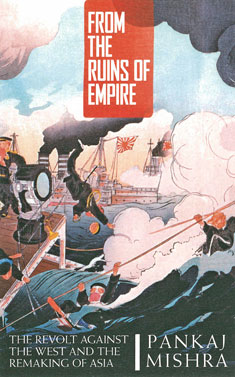 The British writer Alan Bennett once remarked that history is “just one damned thing after another”. And so it might seem.

This idea derives from the origin of our word, namely, the Greek term historia (knowledge gained through investigation). Yet when I studied history at school, investigation played no part in my education. The textbooks we used were didactic; we learned by rote the facts our teachers—themselves educated in much the same way—held to be true.

So, for example, I learned that the Victorian period (1837–1901) was a time of great, self-confident progress. The heavily pink map on the classroom wall was testament to the might of the British Empire, the British Isles brazenly at the centre of it all.

There was not then—and I suspect there is not now, at least at the level of secondary education—any attempt to look at an alternative view. That there are other options should be self-evident; that we should consider them, beyond doubt.

So it was with some interest, and not a little surprise, that I embarked on Pankaj Mishra’s remarkable book. From the Ruins of Empire asserts that the Victorian period I had been taught to respect was, in fact, experienced by Asians as a catastrophe.

The events of the time: Britain’s increasingly tight control of India, it’s use of the opium trade to attempt to dominate China, and the humiliation of the Ottoman Empire, produced throughout Asia a new way of thinking.

Individuals emerged who were not afraid to challenge the conventional belief that the West was the naturally dominant culture.

According to Mishra, the ideas that began to emerge in this period are behind everything, from the Chinese Communist Party and Al-Qaeda, to Indian nationalism and the Muslim Brotherhood. His arguments are convincing and beautifully articulated.

Appropriately he begins his exploration with the 1905 Battle of Tsushima. This naval conflict, played out over two days in the narrow strait between Kyushu and South Korea, pitted the Japanese navy (in total some 89 ships under the command of Admiral Togo Heihachiro) against the Russian Empire (with some 28 vessels commanded by Admiral Zinovy Rozhestvensy).

It was a decisive victory for the Japanese, effectively ending a war that was being fought mainly to decide who would control the Korean Peninsula and Manchuria.

The Battle of Tsushima was later defined by military historians (including American writer Edmund Morris) as “by far the greatest and most important naval event since the Battle of Trafalgar”.

Aside from the discussion of any military prowess, what is most important to note—and is crucial to what Mishra posits in his book—is that the Tsushima battle was the first time since the Middle Ages that an Asian power had defeated one from the West. The repercussions were immediate.

Lord Curzon, the viceroy of India—the country that was then the jewel in Britain’s crown of empire—remarked that the “reverberations of [the Tsushima] victory have gone like a thunderclap through the whispering galleries of the East”. Curzon had captured the mood exactly.

In South Africa, a then unknown young lawyer suggested that, “so far and wide have the roots of Japanese victory spread that we cannot now visualise all the fruit it will put forth”. His name was Mohandas Gandhi.

And around the world other thinkers from the East were encouraged by Japan’s victory. Mustafa Kemal (later known as Atatu˝rk) took Japan as his model in his efforts to reform the Ottoman Empire.

Meanwhile, in his English public school of Harrow, Jawaharlal Nehru (later to become India’s first prime minister) found the inspiration that was to lead him in his fight for “Indian freedom”. Closer to home, Sun Yat Sen—also in England at the time—found encouragement in his quest for nationalism.

Mishra’s book is remarkable in its scope and is highly entertaining as well as informative. It is by no means a dry historical tract and is not lacking in humour.

When Napoleon attempted, for example, to subjugate Egypt, he professed admiration for all things Islam. Yet when prompted to become a Muslim, he protested there were two barriers: circumcision and wine.