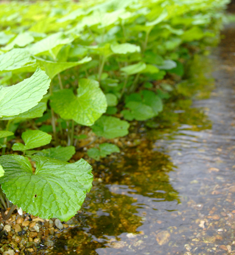 Dorset farmer is first in Europe to grow the fickle plant

In a tranquil valley in Dorset, south-west England—the exact location is a closely guarded secret—a uniquely Japanese crop is taking hold in beds fed by an artesian spring alongside the River Frome.

Wasabi plants are being cultivated for the first time in Europe, and a business that began growing this notoriously fickle plant three years ago has since won plaudits from some of the biggest names in modern cuisine.

And while wasabi is not yet a staple in the UK, the fact that it is increasingly appearing is a positive development, believes Jon Old, the firm’s project manager.

The next hurdle is to convince consumers to use the real product instead of imitation powders and pastes.

“The first thing [the company] read about wasabi was that it was difficult to grow”, Old explained to BCCJ ACUMEN. “When we tried to find out more, we discovered the world of wasabi growing is very competitive and shrouded in secrecy”.

On top of that, the plant requires shade, constant temperatures, clean, flowing water and free-draining gravel beds, which combine to make it a crop that few could consider growing on a commercial basis.

It also takes two years to come to harvest, causing problems linked to disease build-up and making it more susceptible to quirks of the weather, unlike faster-growing crops.

“However, with fifth-generation watercress farmers in the company, we felt that if anyone could grow it, we could”, he said.

Wasabi has been cultivated in Japan since the 16th century and when grated, the stem, or rhizome, is used to make the pale green paste that is a de rigueur accompaniment to sushi.

Wasabia japonica is a member of the Brassicaceae family, which also encompasses cabbages, horseradish and mustard, and is primarily cultivated in the prefectures of Shizuoka, Nagano and Iwate.

When ground, the root produces vapours that stimulate the nasal passages more than the tongue.

And as it is difficult to cultivate, it is expensive. The high price has driven demand for substitute versions, most of which are made from horseradish, mustard, starch and green food colouring.

“Because fresh wasabi is so hard to find in the UK, there was not a demand for it that was required to be filled”, Old said. “However, with no competition from any other suppliers in Europe, and the growing popularity of sushi and Japanese food in general, we felt that demand would follow supply.

“Interest in the crop has been very high since we launched the product, and demand is rapidly increasing among chefs”, he added.

“Orders placed through our website are also increasing as the product receives more and more publicity”.

Each rhizome sells for between £8 and £45, depending on its size, and is a very different product from what most Britons consider to be wasabi.

“We always knew a large part of our mission was educating the public, as currently the only wasabi products on the market are imitation powders and pastes that contain very little—and often no—wasabi”, Old said. “They are made up of horseradish and mustard powder, which give the heat of wasabi, but none of the subtle aromas or flavour notes that have the Michelin-starred chefs excited.

“Fresh wasabi’s flavour is only released on grating, when compounds come into contact and react to produce the pungent flavour, along with a surprising sweetness that imitation products cannot convey”.

The Wasabi Company dispatches the rhizomes in cardboard boxes. Each rhizome is individually wrapped in wet muslin and plastic, while a grater, brush and instructions accompany each order.

To ensure that the wasabi is enjoyed in tip-top condition, Old recommends that it be grated and consumed within a fortnight of being received.

The last time anyone in the UK attempted to grow wasabi commercially was 30 years ago, in Scotland. That project quickly failed.

“All the complex factors mean you have to be very brave or a little crazy to try”, Old said. “For us, it was all about the challenge and being the first to make it work”.