According to a survey conducted earlier this year by Shinsei Bank, Limited, businessmen pay, on average, ¥510 for lunch. This is down sharply from the 1992 peak of ¥746 and closer to the 1982 pre-bubble level.

The Sankei Shimbun (27 January) reports that the bank also tracked the methods salaried workers have adopted to reduce out-of-pocket expenditure. Although in previous years, the first to be slashed had been drinking budgets, last year the cuts came at lunchtime.

The items that followed were: outlays for drinking (presumably after work); spur-of-the-moment purchases; using shopping comparisons and other internet advisory pages to seek out the lowest prices; and bringing to work one’s own bottle of water.

“The difference between 30 years ago and now is that the hope for ‘a tomorrow that will be better’ has been replaced by ‘the bitter saga of the Heisei-era wage earner’”, according to marketing consultant Ryuuji Ishikawa. “I believe that [wage earners], by exchanging information among themselves on how to save by using the internet, get a perverse sense of pleasure from displaying their resolve, while at the same time commiserating”.

A survey in the Nikkei Marketing Journal (16 January), of 20,000 Kanto-region residents aged between 20 and 60, shows that a significant number of consumers sometimes refrain from purchasing items they desire, due to either fear of failure, or regretting a purchase later.

By combining the respondents who agreed, or partly agreed, with the statement, the overall percentage for all age groups reached 40.8%. The amount exceeded 54.0% for subjects in their twenties and 47.3% for those in their thirties—indicating a surprising reluctance to purchase certain goods on the part of younger consumers.

As a result, a growing percentage of consumers are likely to mull over purchases beforehand, either searching for others’ opinions via a social media site or other internet resource, or by polling friends and acquaintances.

The search for product information tends to vary by sector. When considering travel, data devices, cosmetics and apparel, consumers tend to use the internet and personal acquaintances almost equally.

However, for home appliances—in particular home entertainment products—the internet is a more likely source of information. For sundry goods, wine, other alcoholic beverages and food products in general, friends and acquaintances are more likely to be trusted.

Whether a success or failure, more than half the respondents said they were far more likely to convey their purchase experiences to friends or acquaintances than post them on the internet.

A particularly high percentage of subjects in their thirties said they were likely to express satisfaction over a purchase to a friend or acquaintance.

The article also notes that appliance retailer Yodobashi Camera Co., Ltd. and drugstore chain Sumisho Drugstores Inc. (Tomods) are among the retailers trying to introduce facts on their websites that will enable consumers to obtain correct information about products, and help dispel anxiety over purchases.

According to a nationwide survey of 10,420 respondents aged between 16 and 80, and conducted by Nikkei Research last October, about 20% of consumer outlays were related to internet use, the Nikkei Marketing Journal (21 November) reports.

The average monthly outlay—excluding that for rent, utilities and other fixed expenditures—was ¥132,800. Of this, internet-related consumption was, on average, ¥25,900 (nearly 20%).

According to 80% of the respondents, the items most purchased relating to travel were airline tickets and pre-arranged package tours. While some 26% said that their internet-related outlays had increased over the previous year, 11% said such outlays had declined. For example, 26% of those with increased internet consumption also said their visits to retail stores had increased, as opposed to 23% who said such visits had declined.

The greatest use of the internet was email-related, according to 95% of respondents, followed by obtaining, or searching for, information (90%); purchases of products or services (76%); and “just whiling away the time” (54%). In addition, the survey found that one in three internet users use Facebook, Twitter, Mixi and/or other social media sites.

A survey conducted last year by Tokyo-based AUN Consulting, Inc. found that, in terms of internet penetration in each of the world’s 40 largest economies, Japan ranked 12th.

The Ministry of Economy, Trade and Industry announced guidelines for more relaxed standards by which smartphones could be used to remotely operate home appliances, the Sankei Shimbun (27 January) reports.

The main concerns about the safety of such devices will be addressed, and proposals for revisions to the statute on appliance safety (enacted in 1962) are to be completed by the middle of the year.

The move is expected to spur further development of home appliances that, in turn, will boost manufacturing by encouraging market growth.

Although smartphones have demonstrated that they are able to remotely operate appliances, the law as it currently stands has barred progress in this direction.

In October last year, Panasonic Corporation was obliged to disengage a function in its new air conditioner models. The firm had devised a system that would have made possible the remote operation of its on and off controls.

In anticipation of the changes, NTT DoCoMo, Inc is said to be developing remote operating systems that will be offered to homebuilders and condominium developers. 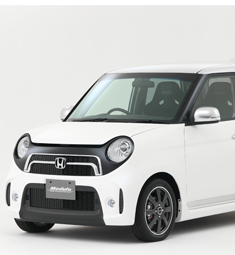 In the meantime, Nikkei Business (21 January) has noted a pronounced shift among new-car buyers: seven out of Japan’s 10 best-selling domestic models are keijidousha—small cars with a maximum engine displacement of 660cm3.

The Toyota Prius and Aqua models took the top two spots, while third and fourth place went to the Daihatsu Mira (266,567 units sold) and the Honda N BOX (211,156 units). In positions six to nine were the Suzuki Wagon R, two models from Daihatsu Motor Co., Ltd., and one from Suzuki Motor Corporation.

The increased demand for economy models reflects, among other things, the fact that the government subsidy for purchases of eco-cars has ended.

Online newspaper J-cast News (5 January) reports that, beginning at the end of January, the Ministry of Land, Infrastructure Transport and Tourism will begin monitoring tests of a new class of ultra-mini vehicle, referred to as Chou-kogata Mobility. Safety standards and other parameters will be monitored for two years, and the ministry is expected to permit the sale of such vehicles any time from 2015.

Compared with the starting price of ¥800,000 for lightweight class models, many in the industry expect micro-mini vehicles to sell for under ¥500,000.

The article reports that sales tax, insurance and safety inspection requirements remain to be ironed out.