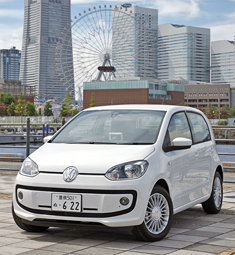 Over 10,000 units of the Volkswagen up!, with a base price of ¥1.49mn each, have been sold here since going on the market in October.

Keeping up with a 42-year tradition, the Nikkei Marketing Journal (19 June) announced its midyear list of hitto shohin (popular products).

Meanwhile, loosening of the money supply by the Bank of Japan led large numbers of borrowers to inquire about refinancing their mortgages based on historically low fixed rates.

Other strong contenders included Thai tourists in Japan. Having taken advantage of the drop in the value of the yen, their numbers increased for 13 straight months.

Further down the list was the Volkswagen up!, a one-litre, three-cylinder compact car that in October went on sale in Japan at the basic list price of ¥1.49mn. Since going on sale, Volkswagen Japan has sold over 10,000 units of the vehicle.

Also selling well have been action cameras, which are fastened to helmets or skis to safely record videos while users are engaged in frantic activity.

And Mount Fuji—now a World Heritage Site—is expecting a flood of visitors  during the summer climbing season.

The newspaper bestowed special prizes on Tokyo Disney Resort on the occasion of its 30th anniversary, and a “nice try” award on beef bowl chain Yoshinoya Co., Ltd. for offering extra-cheap ¥280 special meals.

For reasons that should require no explanation, this summer’s zannen-sho (booby prize) went to the Boeing 787.

This implies not so much a drop in coffee’s popularity as it does diversification of how the beverage is marketed.

Nikkei Business (17 June) reported that in May, Nestlé Professional, a division of Nestlé Japan, launched their Nescafé Milano dispenser machine for the food service industry and their ProCare beverage service programme.

As part of the ProCare programme, shops or outlets can rent a Nescafé Milano machine for a flat monthly payment of just ¥15,750. In addition, they will receive continuous technical maintenance, café management support and promotional displays. The firm expects to have 500 machine placements by the end of 2013.

The outlets are free to set their own prices, but their merchandise offerings (up to 14 different blends) are expected to undersell the major chains.

Some 60% of the existing owners of the machines are food and beverage outlets, bars and ice-cream parlours, with the remaining 40% located in retail outlets such as bookstores seeking to make use of surplus space.

In addition, coffee importer Key Coffee Inc. is seeking to expand its Key café mini-outlets that can be set up in a space as small as 9.9m2.

Currently there are 13 mini-cafés, and the firm hopes to have 30 of the turnkey operations up and running by the end of the year. Key Coffee provides all the equipment necessary, including menus.

Since the firm eschews a franchising system for these cafés, customers are not obliged to pay licensing fees or royalties. The outlets are treated as a niche business, able to fill … small niches.

Putting the Alpha into Accommodation

Of particular interest are the top five performers among the nation’s major hotels in each of four categories (the latest data is from FY2011).

At the other end of the hospitality spectrum, Japan’s business hotels have been appealing to travellers by emphasising kaimin (a good nights’ sleep), reported travel writer Noriko Shioda. 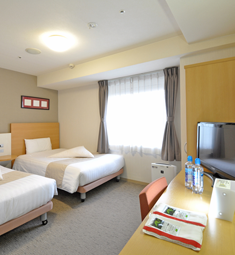 The Comfort Hotel’s “sheep room” has bedding and lighting aimed at enhancing sleep.

One such example is Hankyu-Hanshin-Daiichi Hotel Group’s Remm chain. In addition to a bed, each guest room is equipped with an electric massage chair, a special rain-type showerhead, and a choice of three varieties of pillow.

The rooms are also available for daytime naps at the rate of ¥8,000 for six hours.

Since its opening in 2007, the Remm Hibiya Hotel has maintained an occupancy rate of over 80%. “Many of our guests are repeat customers who are seeking that ‘plus alpha’ element from their accommodation and are willing to pay extra out of their own pockets, on top of their per diem budget”, said staff member Eri Nozawa. The firm also operates branches in Akihabara and has one branch in Osaka.

Since opening in 1999, the Comfort Hotel chain has adopted a similar tack. It offers a “hitsuji (sheep) room” in some of its hotels with bedding and lighting that is aimed at enhancing sleep.

The hotels also feature choice pillows in all guest rooms. The oversized pillows have different padding in the centre and at the ends, to provide support for different sleeping positions. They have made such a favourable impression on guests that the hotel chain has sold more than 10,000 of them, at ¥7,800 each. (No mention is made of how many have been purloined).

Gearing Up for New Wardrobes

According to the Nikkei Marketing Journal, an internet survey of 1,000 Japanese adults by Macromill, Inc. found that 60.3% of respondents expected purchases of clothes to stay about the same, 20.1% said they would increase outlays this year, while 14.4% said outlays were likely to decline.

The top item most likely to be purchased for males and females alike was T-shirts, with 45.4% and 50.6%, respectively. After that, the items deviate, with males naming functional underwear, jeans, dress shirts and trousers to complete the top five, while women named dresses, functional underwear, blouses and skirts.

Another item on the same page gave the results of a survey, by household goods maker Lion Corporation, of 400 adults aged 20–60. The poll asked if they habitually washed newly purchased clothes and other items before wearing them. Some 62.4% said they did, of whom 26.4% said they always did so, and 36% who said they did on some occasions.

Items most likely to be washed before being worn included towels, T-shirts and cutsew garments. The main reasons stated for washing included, “They were touched by other people” (37.3%), “the odour bothers me” (35.8%); and “I want to wash out residual chemicals” (33.6%).