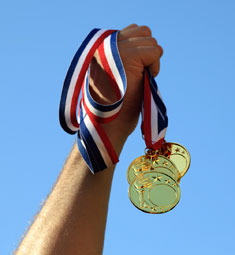 Will Japan win three gold medals at the Sochi Olympics?

Given the growing trend of trying to project what will happen in the new year, Nikkan Gendai (13 January) asked researchers at think tanks and other individuals to collaborate on compiling a list of “Surprising Predictions” for Heisei 26, or 2014.

In the list that follows, the numbers in parentheses indicate the number of stars given to each prediction. The number (1) indicates the least likely probability and (3) the most likely.

Hideo Kumano, an economist at Dai-Ichi Life Insurance Company, Ltd., said he believes that if China agrees to take part in the TPP talks, the Japanese market is likely to be flooded with cheap goods—more so than it already is.

According to market analyst Itsuo Toyoshima, “Sino-Japanese relations face three problems: China’s proclamation of an air-defence identification zone in the East China Sea, the dispute over the Senkaku Islands, and Yasukuni Shrine.

“A military clash can’t be ruled out. And were that to occur, the value of the yen, which is regarded as a safe asset, would rise”. It was Toyoshima who made the prediction, in the aforementioned list, that the yen would rebound to ¥85/$1. 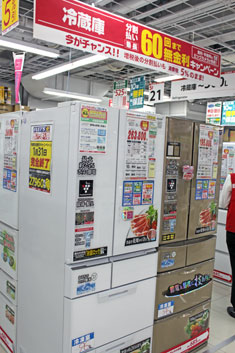 Large refrigerators are in high demand.

From now until 1 April, when the consumption tax will rise from 5% to 8%, Japan is in a period called kakekomi shosen (hastening battle between businesses).

Last year, the Japan Marketing Journal (27 December) asked five mass retail chains that specialise in home appliances—Yamada Denki, Bic Camera, Edion, Case Holdings and Yodobashi Camera—which items they expect to be in high demand between now and the implementation of the tax hike.

Particularly conspicuous in their replies were large-capacity refrigerators, either those priced above ¥200,000 or those with a capacity over 500 litres.

According to a nationwide survey of 1,000 adults conducted in mid-December by Macromill, 57.7% of respondents said they planned some sort of financial outlay prior to the tax rise.

In terms of what consumers will be rushing to buy, home appliances and electronics, mentioned by 25.9% of respondents, top the list. Sales of personal computers and tablet computers are expected to spike ahead of the phase-out of Windows XP.

Electronics were followed in the list by daily household items such as detergent and toilet tissue (18.7%), and foods and beverages with an extended shelf life (17.6%). Indications suggest short-term demand is also rising for clothing and shoes, as well as furniture and interior goods. 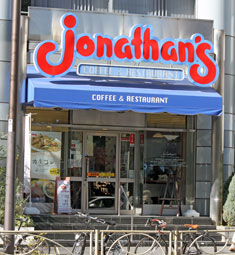 Many family restaurants are expanding operations.

In mid-December, the Teikoku Data Bank conducted a survey of 10,375 firms on manpower shortages. A full 24% of respondents said they were unable to fill their ranks of non-regular positions.

By industry, 53% of food and beverage businesses reported a shortage of candidates for non-regular jobs. The shortage was attributed to new demand for workers created by expanded investments, particularly among family restaurants.

The survey also highlighted a shortage of regular (full-time) workers; about 37% of respondents said they were struggling to reach full staffing levels.

A particularly high shortage was reported in the appliance and personal computer retailing sector, where Abenomics has been credited with boosting consumer demand.

The labour shortage may also be responsible for a slight increase in wages.

According to a December poll conducted in the Chubu, Kanto and Kansai regions by Recruit Jobs Co. Ltd., as reported in the Nikkei Marketing Journal (22 January), the average hourly wage for part-time workers rose ¥3 to ¥959, compared with the same month in 2012. This wage is the highest recorded since Recruit Jobs began the survey in January 2006. 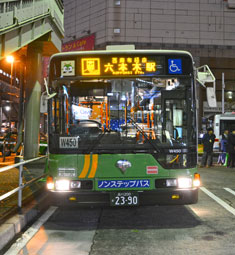 On 21 December, an all-night bus service was launched covering the 2.73km segment between the nocturnal playground of Roppongi and JR Shibuya Station. The move is seen as an experiment to lay the groundwork for the gradual expansion of Tokyo’s transport network to round-the-clock operations.

“It’s convenient when I have to do overtime”, a 41-year old company employee, who works in the Shibuya area and commutes from Yokohama, told the Sankei Shimbun (5 January). The man said he would also probably use the service when visiting Roppongi for social activities.

A 21-year-old female office worker said she welcomed the new service due to the difficulty in hailing a cab in Roppongi late at night. “I appreciate the presence of security staff aboard the bus, so I don’t have to worry about unruly drunks”, she said.

The metropolitan bus network foresees the wider adoption of 24-hour services ahead of the 2020 Olympic and Paralympic Games.

Profitability of the operations will be a key consideration. Passengers on the four round-trip departures running between Roppongi and Shibuya from 1:10am to 5:30am pay ¥400—twice the regular bus fare.

According to a source at the Institute of Transportation Economics, late-night operations in such European cities as London, Paris and Barcelona have faced chronic deficits and rely on tax revenues to subsidise their operations.

“Rather than depending on a limited passenger segment, it will be necessary for the infrastructure to handle a wide range of needs, or it won’t fly”, the source said.

This led the reporter to conclude that the success or failure of the new endeavour will depend on how soon late-night bus transport can dovetail with the city’s changing lifestyles.