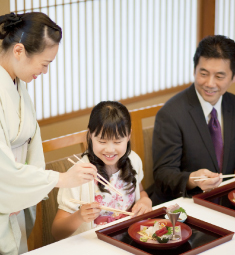 In efforts to conserve electricity while west Japan sorts out its nuclear woes, the Nikkei Marketing Journal (23 July) reports that hotels in the Kansai region have been adopting a variety of creative solutions.

The Hotel Osaka Bay Tower has announced that, on specific days until the end of September, its regular 2pm check-in time will be changed to 6pm, while the check-out time will change from 11am to 10am. The hotel is also offering discounts of up to 65% on overnight rates.

The Royal Hotel in Nara City, meanwhile, is offering a plan according to which guests staying at the hotel will not be charged for any day during their stay that has been affected by a rolling blackout.

Until the end of August, the Westin Hotel Osaka will reduce the price of cold beverages in its lobby lounge on hot days. If the forecast at 9am is for a moushobi—a day with temperatures exceeding 35 degrees Celsius—drinks will be discounted 35%. Likewise, if the mercury is forecast to rise over 30 degrees Celsius for a manatsubi day, beverages will be 30% cheaper.

Meanwhile, the Sankei Shimbun (17 July) notes some of the new plans being offered by hotels in other parts of the country. At its Yamazato restaurant, the Hotel Okura in Tokyo is offering, as part of an overnight plan, a course in Japanese-style dining etiquette for families.

Tokyo’s Shinagawa Prince hotel is offering parents and children instruction in the care and feeding of porpoises at a neighbouring aquarium.

As appreciation of the yen forces more Japanese firms to move their production as well as research and development (R&D) to centres offshore, Japan’s domestic manufacturing base is shrinking and the leaking of proprietary technologies is becoming an increasing concern, the Nikkei Business (9 July) reports.

According to the White Paper on Manufacturing Industries (Monozukuri) 2011, compiled by the Ministry of Economy, Trade and Industry, 44.5% of firms with manufacturing plants overseas were either certain, or suspected, that their technology had been leaked.

The overwhelming majority (63.5%) of technology-related leaks involved operations in China, followed by those in South Korea and Japan.

Local employees at overseas manufacturing plants were blamed for leaking data in 52.8% of the cases, while 17.3% of the leaks were attributed to former Japanese staff and 11.8% to current staff.

To avoid losing proprietary data, media and component manufacturer TDK Corporation has adopted countermeasures, such as developing manufacturing equipment in-house and not making it available to outsiders.

The firm purposely varies the sources of parts used in its manufacturing equipment, and takes pains to prevent individual members of staff acquiring too much related know-how.

Nissan Motor Co., Ltd.—another firm that has taken a proactive stance on security—has boosted the wages and bonuses of its most talented R&D staff to levels comparable to those of the firm’s directors.

A sidebar to the article lists six steps by which firms can reduce leaks: enforce tighter restrictions on who can access certain information; remove technological data from public documents such as patents; classify documents and other data to serve as evidence if an errant worker is prosecuted; include in employment contracts the penalties for illegal disclosure; recognise and reward workers’ contributions; and expect top management to follow the same rules as ordinary workers.

While Japan’s hardworking full-time employees have already had their kozukai (pocket money) cut to the bone, one economic think tank has predicted that the pending increase in the consumption tax to 8% will leech another ¥94,379 annually from household budgets (based on a family of four with a total annual income of ¥8mn).

Husbands have in the past assumed that any surplus from the monthly household allowance would be saved as their wives’ hesokuri (butter and egg money), but make little effort to monitor where such money actually goes.

Financial planner Yoko Hanawa alerts the mostly male readership of Nikkan Gendai (6 July) to the “hidden expenditures” by wives, particularly arafo (“around forty” women between 35 and 45), who may be draining household finances through their habitual puchi zeitaku (small indulgences).

Miss Hanawa suggests husbands should investigate to determine whether their wives are bingeing on unnecessary luxuries, such as pricey lingerie and expensive cosmetics.

While males are forsaking hair stylists for low-priced barbers, their wives may be paying large amounts for cuts, perms, tinting and other treatments at over ¥10,000 each. Other indulgences, such as fingernail and toenail art, can be double this amount.

“The puchi zeitaku tend to become habitual and can’t easily be discouraged”, warns Hanawa, adding that, “Prompt and decisive action is called for to cut such expenditures”.

While much scrutiny is being focused on low-cost airlines, the Sankei Shimbun (16 July) has turned its attention to the emerging one-coin car rental business chains.

Car Bell, based in Tokyo’s Chuo Ward, has some 170 franchises nationwide that are used-car dealerships.

A car with a 1.5-litre engine can be rented for a basic fee for the first three hours, after which the charge goes up in increments of ¥100 per hour. Thus, the longer one rents the car, the cheaper the hourly rate becomes. For one day, the charge is ¥4,200—about half that of major rental agencies.

Nevertheless, Nikoniko Rent-a-Car in Yokohama’s Tsuzuki Ward manages to undersell Car Bell. For a 1,350-litre car, it charges just ¥2,100 for six hours and ¥3,360 for a full day.

Following an agreement reached with a number of service stations, Nikoniko expects to have 1,000 rental outlets operating across the country by the end of 2012.

The mixing of two separate types of enterprises, such as car rentals operated on the premises of gas stations, used to be referred to as “fusion businesses”.

One such firm, Love-in Plaza SS in Tokyo’s Kunitachi City, credits rentals for a 30% year-on-year boost in revenues. “It’s kept us from going under”, said service station proprietor Toshiaki Akusawa. “More of our regular customers have been supporting us via used car sales, safety inspections and other services”.

What “Buried Treasure” Do You Have at Home?

The results of the nationwide internet survey conducted in June show a breakdown of the 1,000 responses with 200 results in each age segment.

Tanaka estimated the average value of the jewellery at ¥40,627 per woman.

Some 60% of the respondents said they had not worn or otherwise used the items for at least 10 years. The main reasons given for this include that “the design is old-fashioned” and that “the item is too important, or too valuable to be worn”. In the case of earrings, a common reply was that one of a pair had been mislaid. Tanaka estimates that, nationwide, some 26.27mn pieces of jewellery have not been used for a long time.