In its predictions for 2012, the magazine Nikkei Trendy (December) notes that Japan’s music fans are expected to mark the 50th anniversary of The Beatles’ cutting their first single. “Love Me Do/P.S. I Love You” was recorded in June 1962 and released in the following October. Media coverage is also expected to gain momentum in the run-up to the London Olympiad, which begins on 27 July. 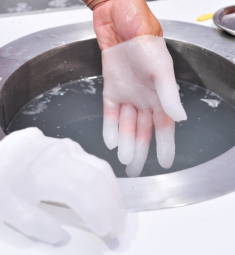 This is how it’s done. (PHOTO: MADAME TUSSAUDS TOKYO)

Preparations, meanwhile, are moving ahead for the opening of Madame Tussaud’s Tokyo, to open at Decks Tokyo Beach in the Odaiba area in the spring of 2013.

A spokesperson for the Merlin Entertainments Group noted that a three-month exhibition in Tokyo that started last September (featured in the November issue of ACUMEN) had “surpassed expectations”. The new wax museum is expected to display more than 60 life-size figures, including those of Lady Gaga and Yuko Oshima, of the popular all-girl entertainment group AKB48. Merlin also announced plans to open a “Legoland Discovery Center Tokyo”.

In its 19 November issue, Shukan Diamond magazine conducted its annual survey of business air travel. The Japanese respondents had travelled by air, on domestic and overseas routes, six or more times over the previous three years. In the total point ranking, Singapore Airlines emerged as the leading carrier, garnering a total of 117.63 points, coming first for quality of service by attendants and in-flight meals, and making it to the top three for comfort, safety, in-flight entertainment and mileage perks.

Part of Singapore Airlines’ success might also be due to the popularity of that nation’s airport.

Changi International received 25% of all votes, followed by Tokyo’s Haneda (14%) and Narita (8%) airports.

The respondents were also invited to pass judgment on what they consider to be the “worst” airport.

Interestingly, Narita and Heathrow tied for first place with 11% each, the former being criticised for its long distance from the city centre and its overall poor access.

Heathrow, meanwhile, was seen as inconvenient for transfers and slow in immigration screening.

While low-cost carriers are expected to make further inroads into civil aviation in 2012, needless to say this sector is believed unlikely to impact business travel—at least over the short term.

By summer, Nikkei Trendy magazine predicts, work will be completed on the Marunouchi side of Tokyo’s venerable central station to restore it to its original 1914 appearance—67 years after its elegantly curved roofs were destroyed in a 1945 air raid. The renovation is expected to attract many visitors to nearby shops and restaurants. 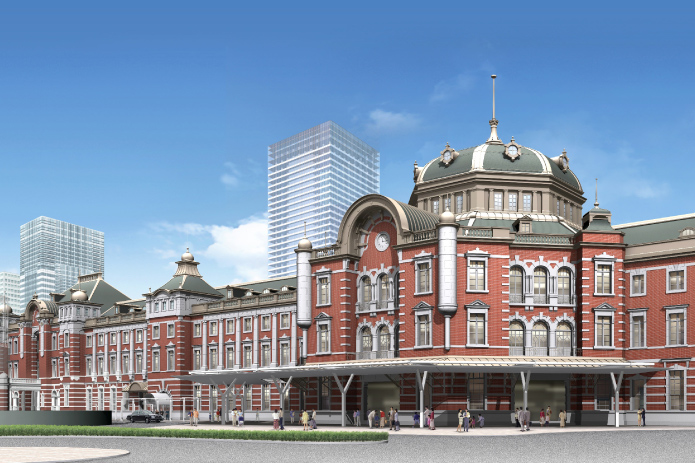 Over the past several years, there has been a pronounced trend toward ekinaka (inside the station) merchandising, with more space at major rail terminals being devoted to shopping and even services such as barbers and babysitting. Will motorway service areas emerge as the next new marketing trend?

Previously used by drivers for refuelling or to stretch their legs, the service areas astride Japan’s toll highways have, until now, been favoured for neither ambiance nor cuisine. But efforts are now afoot to catch up with the times.

The Nikkei Marketing Journal (9 January) introduces EXPASA, the name given to the motorway service area catering to eastbound motorists on the Tomei Expressway in Ebina City, Kanagawa Prefecture. When the facility, about 50km west of Tokyo, reopened on 15 December following renovations, it had expanded floor space by 10% to 3,841m2 to accommodate 28 tenants (including 19 retail shops)—thus making it the largest on Japan’s toll road network.

Among the renovations are more accommodating lavatories, an entrance area resembling a lobby, and a large monitor that displays current traffic conditions. The dining area is situated so that customers can look out and enjoy the view. A play area for toddlers has also been provided. The main rationale behind the upgrade appears to be the large number of daily users—about 20,000—on one of Japan’s busiest traffic arteries.

Adding to EXPASA’s appeal is a gate that permits access to the service area by people who are not using the highway, but simply want to shop or eat something. Since many of the businesses in the service area operate round the clock, it’s said to be attracting not only residents in the immediate area, but also those in communities near the next several exits, since shops such as upscale supermarket Seijo Ishii can be relied on to be open into the late hours. On holidays, this arrangement attracts as many as 900 daily customers, who can also have a meal at one of the five restaurants in EXPANSA’s food court. The annual turnover of area shops is projected to reach ¥7bn.

Years of the Dragon (Mostly) Good for Business

It’s common for Japan’s print media to issue prognostications for the year ahead and, for 2012, one in particular stands out. The Sankei Shimbun (31 December) newspaper noted that, since the end of the Pacific War, of the 12 animals in the Chinese hexegenerary cycle, the strongest growth in the stock market has been realised in years of the dragon, of which 2012 is one.

The mighty dragon, however, is far from infallible: share prices fell 27.2% in another dragon year, 2000, due to the collapse of the so-called IT bubble.

This topic deserves to be weighed against how seriously Japanese regard fortune telling in general. In a survey of 3,874 subscribers in the Asahi Shimbun’s “be between” online survey, published in the newspaper’s print edition on 12 November, the nonbelievers said they outnumbered believers by 68% to 32%.

The most commonly stated reason for scepticism, voiced by 1,781 respondents, was the lack of scientific evidence. This was followed by lack of interest (817); unpleasant to ponder unpleasant results (600); believe it is rooted in commercialism (468); unconvincing (289); and unreliable (176).