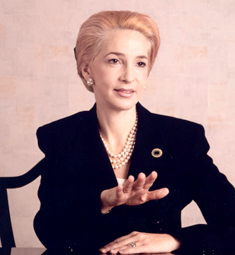 A former director of the United Kingdom Atomic Energy Authority for two terms, Lady Judge was approached to join the embattled firm in October 2012. She said she was “thrilled and honoured” at the opportunity to help—although she admitted that there is a long way to go to rehabilitate the firm in the eyes of the Japanese public.

“My aim is to instil a new safety culture into the organisation, in particular an internal self-regulatory system so that this culture of safety is disseminated throughout the company.

“By doing that, we can build up standards of safety on a company-wide basis in a way that is proactive and makes everybody in the company more aware”, Lady Judge said.

She attended a meeting of TEPCO’s new Nuclear Reform Monitoring Committee in late February, where she was given an update on the firm’s decontamination efforts in areas around the Fukushima Daiichi Nuclear Power Plant, which she had visited during a trip to Japan in late January.

In addition, she was brought up to date on safety improvements carried out across the firm, including those at the Kashiwazaki-Kariwa Nuclear Power Station in Niigata Prefecture.

Lady Judge said it was at the Fukushima plant where she had “realised just how brave [the workers] are. They are true heroes. I had an opportunity to talk with many of the staff there, including a number of women”.

She expects that women will play an important role in the firm’s future. “I believe it took a lot of courage to appoint a woman to my role, and that in itself is a major development”, she stressed.

Ultimately, Lady Judge has set herself the task of helping TEPCO win back sufficient public trust to enable the firm to restart nuclear power plants that have been offline since the 2011 Tohoku earthquake and tsunami.

“The Japanese people and economy need to have nuclear power as a part of the nation’s energy mix”, she said, pointing out that, at present, the country is being held over a barrel for expensive imports of gas and oil.

She also believes that the disaster was held up by green movements in other countries as evidence of the danger inherent in nuclear energy, and used to abolish their nuclear industries—although they may already be rueing their decision.

“It was a field day for the anti-nuclear folks, but the bad political decisions made at that time are regretted today”, she said.

Germany, for example, is reliant on heavily polluting fossil fuels—carbon emissions have risen dramatically—and imports of energy generated by nuclear power plants just over the border in France. Meanwhile, Poland is constructing a nuclear plant on its western border to provide energy for the German market.

Lady Judge believes that the German government’s decision flies in the face of all the critical requirements of a nation: energy security, energy independence and the need to halt climate change.

“Nuclear is the only energy that answers all three requirements”.

But Germany’s loss could work to the advantage of the British nuclear industry, according to Lady Judge, who was awarded a Commander of the Most Excellent Order of the British Empire (CBE) in June 2010 for services to the nuclear and financial services industries.

“Britain has been in the nuclear business for 66 years now and we have some of the best supply chain companies in the world in this sector”, she said. “We have a long history in nuclear power and have very good design, engineering, construction and manufacturing firms—everything that is needed to build a nuclear power plant. And because we now have no nuclear technology of our own, we can easily work with all other nations’ technology.

“We are glad to be a part of the team that is helping to enhance safety or assist in the decommissioning of the Fukushima plant”, she said.

“I think it was very important that after 11 March, the staff of the British Embassy [Tokyo] did not leave—unlike some others. Instead, we sent people to help out throughout the crisis and provided good advice”, she explained.

Lady Judge, who has dual British and US citizenship, believes that the nuclear industry in other countries has learned from its mistakes: the UK from the fire at the Windscale plant in October 1957, and the US as a result of the partial meltdown of one reactor at the Three Mile Island facility in March 1979.

The result, in both cases, was safety improvements, and the same will happen in Japan, Lady Judge emphasised.

“I would like to see TEPCO put in a self-regulatory organisation and safety culture that makes it the best in the world”, she said. “I want it to have the highest safety standards that will be envied by other nuclear operators around the world”.