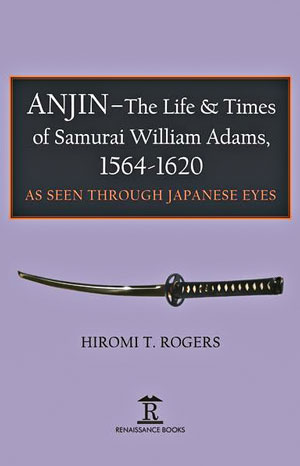 William Adams was born in 1564 in Gillingham, Kent, and at the age of 12 was apprenticed to a master shipbuilder. He spent 12 years studying shipbuilding, navigation and astronomy before joining the Royal Navy, serving under Sir Francis Drake. When he was 34, Adams went to the Netherlands where he was appointed pilot of a five-ship expedition to the Far East. It was to prove a fateful appointment.

After nearly two years at sea, only one of the ships—De Liefde—survived, making landfall in April 1600 off Bungo, the present day Oita Prefecture. Of the original crew, only 24 remained alive and only nine of these were strong enough to stand. Thus, William Adams became the first Englishman to set foot in Japan.

At the time, Portuguese priests alleged that De Liefde was a pirate vessel, and the crew were imprisoned in Osaka Castle on the orders of Shogun Tokugawa Ieyasu, who nevertheless was intrigued by Adams. Ieyasu would later bestow on him a great many privileges, not least of which were two swords and the rank of samurai, along with the new name of Miura Anjin.

This somewhat unlikely scenario has inspired a number of stories, among them James Clavell’s Shogun, as well as numerous academic studies. Now comes a new book that would appear to be something of a hybrid.

Hiromi T. Rogers writes in her preface: “My interest in William Adams springs from … a desire to recontextualise his story from a Japanese point of view—something that hitherto has been missing from Western literature. Adams, after all, became a fully integrated member of the upper echelons of Japanese society … and it was this phenomenon, with all its cultural implications, that triggered my curiosity to find out more. My book is an attempt, therefore, to combine fact and fiction”.

Rogers admits that some critics will find this approach to be poor scholarship, but she invites the reader to join her in riding “these two horses” in a spirit of adventure and open-mindedness. What she has created is a most readable account of Adams’ voyage to Japan and his 20 years living there, and is enriched by detailed observations of Japanese culture and society of the time. Her writing is immediate and highly engaging, and the reader is at once drawn in to her story. The novel-like approach to telling her tale is extremely effective, and what a tale there is to tell.

The book has a number of interesting illustrations, including a map that Adams might have used as pilot of De Liefde and the marker of Adams’ house in old Edo, now on a street named Anjin-dori in Nihonbashi. It is an informative and entertaining read, and the author’s gamble at mixing fact and fiction has paid off handsomely in this new take on the life of William Adams.