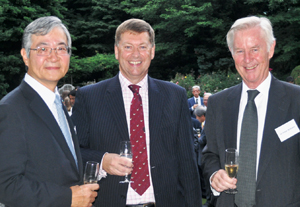 A speech at the Queen’s Birthday Party (see page 44) is one of the big events of the year for most ambassadors, taking place in front of hundreds of VIPs and important embassy contacts. So I suppose it was a bit brave to give up part of mine to a synthesised version of my voice, speaking random sentences written by party guests. All in the interests of promoting our Innovation is GREAT AI campaign.

The technology, developed by Japanese tech firm Toshiba Corporation and the University of Cambridge, is pretty impressive. I had to record 100 sentences in Japanese, from which the programme could then synthesise a very realistic version of my voice, saying any Japanese text typed into it.

Bizarrely, if you typed in English text, it made me speak English in my natural voice, but with a heavy Japanese accent. It’s a fascinating insight into how foreign speakers’ pronunciation of a language is influenced by the stresses and cadences of their own language. You could even adjust the emotional tone to warm, angry, or sad. Naturally I went for warm.

Fortunately, the party guests were kind and the sentences spoken by my voice were fully appropriate—apart from a rogue one by my team promising all embassy staff a 100% pay rise. Nice try. Our guest of honour, Internal Affairs and Communications Minister Seiko Noda, Japan’s most senior female minister, seemed most impressed. 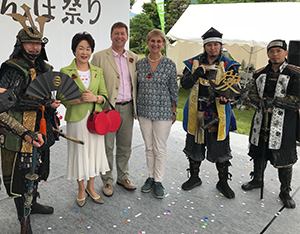 Garden parties
Many people associate a British June and July with garden parties and summer fetes. So, in addition to the Queen’s Birthday Party, it’s not surprising that I end up hosting a number of such events for British-related organisations here at this time of year. The biggest ones, which both had events last month, were the Japan-British Society and the Cambridge & Oxford Society. We are fortunate to have members of the imperial family engaged in both societies.

Sadly HIH Crown Prince Naruhito was unable to attend the Cambridge & Oxford Society event, out of respect for the victims of the Kansai earthquake. But later, HIH Princess Akiko was at the Japan-British Society event, as its patron.

I always enjoy spending time with members of both organisations, who often have very happy memories of living, working and studying in Britain, and remain personally engaged in promoting links between the two countries.

Of course Britain has many other great universities beyond Oxbridge nowadays, and there are a number of other alumni groups in town. I hosted an event for University College London alumni last year, when their vice chancellor was here. There is also an active group of alumni of the Foreign & Commonwealth Office’s own Chevening Scholarship scheme, many of whom work in government.

It is always a pleasure to get together with other British organisations here. The Japan Scotland Association also just held its AGM and reception at the embassy. Some Japanese form their own groups, often with highly specialised membership. I was guest of honour last year at the St James’ Kai, which comprises former Ministry of Economy, Trade and Industry officials who served in London. And I have hosted members of the Club Hiraeth, for Japanese business people who have been posted in Wales.

I also just held a reception to celebrate the 30th Anniversary of the Daiwa Anglo Japanese Foundation, established by Daiwa Securities. It has done a fantastic job of providing grants to many individuals and organisations to promote links between the two countries across a wide range of spheres. And its flagship Daiwa Scholars programme has now seen 170 outstanding young Brits learning Japanese and being placed here in their chosen fields. This year’s batch includes a sword maker and a space academic (well, I said to him, it’s not rocket science).

People sometimes comment on the fact that FCO rules now require that we have to charge on a cost-recovery basis for events that used to be free or subsidised for British-linked organisations. I’m afraid that is a consequence of operating in a resource-constrained environment. But we do sweat the assets hard: I share my home with up to 20,000 people a year. 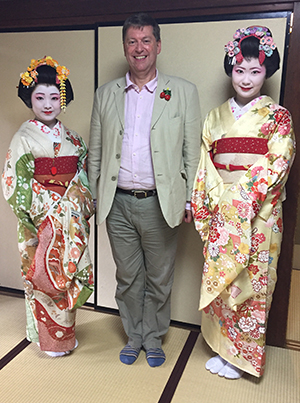 I have now been to more than half of Japan’s prefectures since arriving last January. Sometimes I am invited to fascinating local festivals. In June, Sarah and I were up in Yamagata Prefecture with Governor Mieko Yoshimura (one of Japan’s all too few female governors) for their annual sakuranbo event. I knew Japan was famous for its cherry blossoms, but was less aware of its strengths in producing delicious cherries. Apparently, the fruit trees are a completely different species, though they belong to the same plant family.

I will be travelling down to Kumamoto shortly to address the Japan-British Society there, one of 20 or so such organisations around the country.

Last month I also paid my first visit to the Tokyo Racecourse, to present the trophies for the Epsom Derby Cup, which marks the link between the Japan Racing Association and its UK counterpart, as was featured in the June issue of BCCJ ACUMEN. It was the Brits who introduced organised horse racing to Japan in the 1860s. Nowadays, the races are big business, and there are increasingly lucrative ties between the two nations’ horse racing industries.

After diligent perusal of form and the horses’ appearances, we placed a selection of bets on horses whose names we liked. So it was not surprising that we ended the day down to the tune of several hundred yen.

July visitors include Charles Bowman, 690th Lord Mayor of the City of London, with a delegation from the asset management sector. During his year in office he is travelling the world promoting the UK’s financial services.

Fiona Hyslop, Cabinet Secretary for Culture, Tourism and External Affairs in the Scottish Government, has been here to promote many aspects of Scotland’s relationship with Japan. Liam Fox, International Trade Secretary, is due in Tokyo for the third time in my first 18 months in office here, a reflection of the importance of our future trade relationship with Japan, particularly at a time of growing trade tensions around the world. 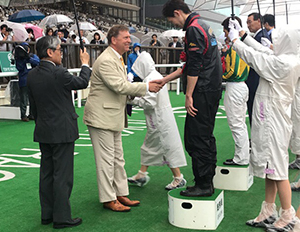 At the Tokyo Racecourse to present trophies for the Epsom Derby Cup.

We will be able to start negotiating a new Free Trade Agreement as soon as we leave the EU on 29 March, 2019. It could come into effect at the end of the Brexit implementation period in December 2020 and will largely be based on the new EU-Japan Economic Partnership Agreement that Japanese Prime Minister Shinzo Abe is travelling to Europe to sign in July. I suspect that some of Dr Fox’s Japanese interlocutors will be extolling the virtues of the Comprehensive and Progressive Agreement for Trans-Pacific Partnership (CPTPP).

So, a busy month as the Tokyo weather gets hotter and stickier.