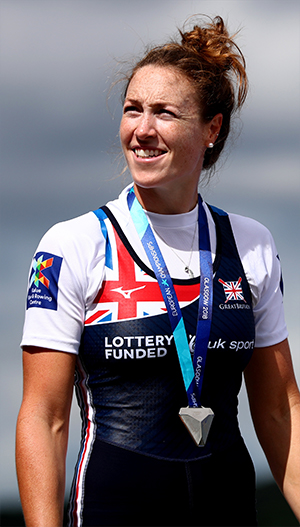 Karen Bennett is in a hurry. She is grabbing a quick breakfast before getting back to the gym for the second punishing session of the morning. And she’s in a hurry to get to Tokyo and improve on the silver medal she won as part of the women’s eight rowing team at the 2016 Olympic Games in Rio de Janeiro.

Women’s eights is a competition in which eight rowers—four on the port side and four on the starboard—propel and guide a single boat.

That silver was a remarkable achievement—given that no British women’s eight had previously won an Olympic medal. But Bennett and the other rowers honing their skills at the Redgrave Pinsent Rowing Lake and Sheriff Boathouse, at Caversham near Reading, have their sights set even higher for the Tokyo 2020 Olympic and Paralympic Games.

“It’s 100 percent what I think about every day, and it’s why I do what I do,” Bennett told ACUMEN. “Nothing as good as an Olympic gold medal is going to be easy, and these last few years have been really tough, but we have had a lot of support and all the girls that I’m training with now are just striving to be the very best that we can be.

“Right now, there is a very positive feeling among the crew,” she added. “All the girls look strong in training and everybody is putting in the work now in the winter months so that, when we get to the summer, all we need to do is brush up around the edges to give us that extra speed over the water.

“There’s a good feeling in the training environ­ment because everyone is so motivated,” she said. “We’re aiming to build on that positivity over the next few months. It’s tiring, but we all know what the goal is and we’re all pushing each other on”.

Originally from Edinburgh, and today a member of the Leander Club—which was founded in the Berkshire town of Remenham in 1818, making it one of the oldest rowing clubs in the world—30-year-old Bennett was in her first full season in the senior ranks of Team GB’s rowing squad when she bowed her head to receive a silver medal in Rio de Janeiro.

A graduate of the British Rowing World Class Start Programme, she was selected for the senior GB Rowing Team for the first time in 2014 and has rowed in pairs, fours and eights, quickly winning silver at the women’s four at the 2015 World Championships in Lac d’Aiguebelette, France.

The 2016 season started well, with Team GB surging through to take gold at the European Championships in Brandenburg, Germany. This was followed by silver at the World Cup in Lucerne, Switzerland, where they came very close to overtaking the reigning Olympic and world champions from the United States. The team then took silver again in eights at the 2017 World Cup in Poznan, Poland, this time behind New Zealand.

In Rio, Team GB again lost to the US women’s eight, but secured silver in an epic race that saw them burst through the field in the second half to pass Romania in a photo finish.

That gong helped to propel Team GB to the top of the medal table for rowing events—above tradi­tional powerhouses such as Germany and the United States—with three golds and two silvers in 14 events, underlining the UK’s strengths in this area.

For Bennett, the only thing better than an Olympic silver will be a gold.

As part of the acclimatisation and prepara­tion for Tokyo 2020, Bennett came to Japan for the first time last autumn—and was impressed by what she found.

“We stayed at Keio University, which will be the team’s base for the Games, and did some training on the rowing machines and in the weight room there,” she recounted. “But we also went on some excursions to the rowing lake, the Olympic village, the British Embassy and a number of other places.

“It was very helpful to see the city and to begin to get a feel for it. I have to say that I loved it—the culture, the way it is so organised, how lovely the people are”.

The next red-letter day on the team’s schedule will be the World Championships in the Austrian city of Linz in June, which serves as a qualifying event for Tokyo 2020.

All the Team GB athletes who have their eyes on spots for Tokyo 2020 are aware of the challenges they are likely to face during those Games. The heat and humidity of a Japanese summer is the biggest concern for most, but Bennett said she and the rest of the women rowers are leaving themselves in the hands of their fantastic support staff.

“We have doctors, a chef, physios, and bio­mechanics experts, and they take all the problems on board just to make sure that we don’t have any problems. That means we don’t have to worry about anything because it is all under control,” she said. “That was how it worked in Rio, which allowed us to put all our focus on doing what we do in training every day and going as fast as we can over the water”.