Karin (left) by the Olympic Cauldron in Enoshima

Even before the pandemic, being able to volunteer at the Olympics seemed unreal to me. The process started two years before the Games were scheduled. The application consisted of a form and interview, and didn’t seem to provide much for the organisers to base their decision on choosing me or not. Considering more than 200,000 people signed up for about 80,000 positions, it made sense for the sake of efficiency. However, it gave little comfort to someone like my best friend who—a former youth pro athlete with an international background—didn’t make the cut.

So, I was surprised when I was accepted and assigned as an Event Service Team Member at the sailing venue in Enoshima, Kanagawa Prefecture.

Given the outbreak of Covid-19 and the conse­quential postponement of the Games, many things were left uncertain. Foreign volunteers were not allowed to participate due to the prolonged entry restrictions to Japan in early 2021. I wasn’t completely sure if I—as a Japanese citizen living outside Japan—would be able to come until I had actually arrived. I received my shift in spring 2021 and started booking my flight and accommodation, but was ready to cancel at any time should the Olympics not take place.

So many things along the way were destined to go wrong but, ultimately, I was able to participate at the Tokyo 2020 Olympics as a volunteer.

Day in the life

My tasks at the venue included giving out ice, shampoo or competition wetsuits to the athletes and team staff. Towards the end of days when there were medal races, “medallist hunters”, as I called them, had to inform and make sure the winners went to their medal ceremony on time after coming back from the competition at sea, celebrating and doing interviews. Although it was a simple task, it was exhilarating. You got to interact with the athletes in a stand-out moment of their careers. I was very privileged to work in this position many times as I could speak English and German fluently. One day I was able to accompany three German medallist teams and use my mother tongue.

The task we were assigned the most fre­quently started out as the position I dreaded most: access control. Our mission was to prevent unauthorised people from entering certain areas. There were, however, barely any unauthorised people in the venue, and they generally knew where they were and were not allowed to enter. Athletes and coaches knowing this sometimes didn’t seem to understand us interrupting their thoughts or discussions to ask for their accreditation cards—in their opinion it was obvious they had the right to enter.

Seeing how the Italians reacted when I greeted them in my very limited Italian—their tense eyes turned into smiling ones—I decided to learn essential words in the languages of the nationals I saw daily in the venue. This little detail completely changed my experience in this role, eventually making it a task that I would look forward to in the morning.

Firstly, it was a great language exercise, because when do you ever get the chance to use 20 different languages in one day? Secondly, the reactions of the team members were priceless. It was astonishing how a simple greeting could bring a smile to a person’s face, and that was enough for me to go home content.

One particular encounter with an Israeli coach lingers in my mind. I had said good morning and goodbye in Hebrew. The coach asked, “Why do you know Hebrew?”

“I only learnt a few words”, I replied. He said: “Yes, but still, my language is of no use to you. Why learn even that?” I explained: “Because of exactly a moment like this—for you”. The coach shook his head, smiled and looked me in the eyes: “I deeply appreciate it”.

When he saw me on the last day he recognised me and gave me an Israeli Olympic pin that the athletes had been carrying around to swap with other countries’ athletes. I told him to wait and he was curious as to why. I took a few seconds to rack my brain for the word “thank you” in Hebrew and when I finally got it he just laughed heartily.

I had many more similar encounters with people from Poland, Estonia, Croatia, Brazil and many other countries. These will forever be fond memories in my mind.

What I will treasure most about this experience, however, is how many Japanese people from all kinds of backgrounds and walks of life I was able to talk to and get in touch with. I think every foreigner in Japan has experienced how hard it is to get to know Japanese people. Aside from the language barrier, it isn’t a custom to talk to strangers. So I really cherish the friendships and contacts I was able to make. 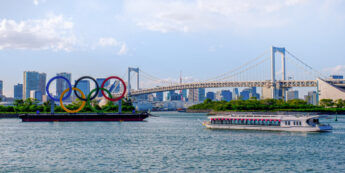 I am not an athlete, but during my experience, I came up with the following analogy: Coming to the Olympics as an athlete is like climbing Mount Fuji. During my ascent two years ago, I realised that climbing Mount Fuji was unique in several ways. Besides being the highest mountain in Japan and a volcano, you could only get to the peak by walking up the hiking trail. You cannot take a gondola or a car as is the case with many other mountains. That means everyone you meet at the top has gone through the same hardship as you.

I started the trip with my cousin and ended it with more than 10 friends we made on the way. This is how I assume it feels to make it to the Olympics and meet different people and maintain a feeling of mutual respect.

Some might debate whether the Olympics should have been held at all during the pandemic, but I will forever be grateful for the experience.