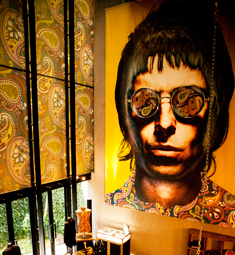 Liam Gallagher, former front man of English rock band Oasis, may not seem like a typical fashion lover. However, Pretty Green, the rocker’s clothing label, has been hugely successful since the 2010 opening of its first store in London.

The menswear brand has won numerous accolades, including the 2010 Drapers Menswear Brand of the Year award, and is the first brand to be so honoured a mere one year after it had opened for business. In 2011, it was selected as the Best Breakthrough Brand at the renowned WGSN Global Fashion Awards, organised by the Worth Global Style Network Limited fashion trend forecasting company.

The Pretty Green brand mixes rock heritage with a quintessential British flavour. It first went into business in the UK as a wholesaler, before expanding to 12 flagship retail stores, including one shop in Tokyo that opened in July 2012.

“The most successful thing about the brand is that it only took three months from the establishment of the company here to the opening of the Tokyo store”, said Koji Kato, representative director and chief executive officer of Pretty Green Japan K.K.

“This is probably the shortest time within which any fashion brand here has opened their flagship store”, Kato added.

In addition to its first retail outlet, in Omotesando, the brand has opened six successful pop-up shops in major department stores, including Isetan. According to Kato, it is extremely difficult for new brands to achieve a presence at this prestigious retailer.

Then, in April, the brand scored another—its most recent—pop-up store opening: in Yurakucho’s Hankyu Men’s.

Then there is a limited edition, capsule collection that has been designed exclusively for the Japanese market.

The label also has certain special projects each season that are inspired by music culture.

According to Sony, the Gallagher brothers have a global fan base of about 800,000 admirers, of whom some 300,000 are in Asia alone.

Liam has visited Japan many times and even played with his band, Beady Eye, at Fuji Rock Festival ’12. He also played at other concerts to support victims of the 2011 Tohoku earthquake and tsunami. 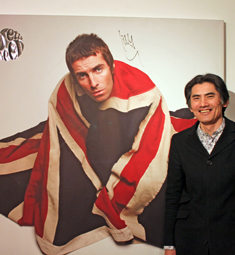 Koji Kato is a fan of British music.

Kato met Liam Gallagher for the first time when the latter came to Japan for the store opening. “After Liam saw the store, he believed the brand would be a big success here”, he said.

As a keen guitar player and a lover of British music, Kato was drawn to the Pretty Green brand.

“I have always had this notion that fashion and music are stuck together. I believe that they co-exist and prosper together. Thus, it was a very natural decision for me to join Pretty Green”, he explained.

Kato began his career in the fashion industry at the influential Japanese brand Yohji Yamamoto. As executive director at the firm’s head office, he helped foster the brand’s international expansion.

In 2007, Kato went to Adidas Japan Inc., where he revamped the marketing and branding systems.

This was followed by a time at Ryohin Keikaku Co., Ltd. (maker of MUJI products), for which Kato, the astute planning director that he is, developed products in the apparel department.

When international fashion brands launch in Japan, they usually collaborate with leading Japanese trading firms or large apparel firms. However, Pretty Green chose not to go down this path and, instead, to go it alone.

“I believe [Pretty Green’s] decision to go into the battlefield completely alone means a lot.

“Although the [international] men’s fashion industry seems to be shrinking its business in Japan, I believe it is possible for new brands to create new business here”, he said.

“As well as having a basic appeal for Liam Gallagher’s fans, those customers who understand real quality will enjoy our products”, he said.

Pretty Green is different to other premium British brands available in Japan, such as Paul Smith and Fred Perry, in that the brand has a strong link to music and culture.

The fashion label focuses on original product development and branding, and does not conform to the regular notion of apparel.

Gallagher directs the designing of the collection and works closely with the design team from the beginning. He checks the sample fittings and gives his final approval before production begins.

The fashion label chose Japan as its first foreign market to launch the brand because, according to Kato, Japan is a fashion leader and the most influential market in the world.

“I would like Pretty Green Japan to serve as a regional pioneer. Then I would take the scheme we have developed here to other Asian countries”, he explained.

Kato and his professional team are planning to devise a branding and apparel business strategy that is directly linked to music—unlike that of any other fashion brand.

Not only would they like to start forging ahead in other Asian countries, but they have plans to open stores in Sapporo, Osaka, Fukuoka and Nagoya.

There are additional plans to launch ladies and children’s lines here, but first they would like to add a wider range of accessories to the collection.

“There are many competitors in women’s wear. However, some items in our men’s line can be worn by women”, he added.

The brand wants to organise collaboration events and construct partnerships with wholesalers, rather than only concentrate on selling their products in the retail market.

“For this reason, we are focusing on increasing brand awareness and creating a buzz through pop-up stores in Japan’s main cities. Further, by establishing online stores, we can cover a much wider market than what can be reached through [bricks and mortar] stores”, he explained.

“We want our customers to get involved in the Pretty Green lifestyle, rather than just in the product.

“I want the customer to understand the brand and the brand philosophy, like a kind of heart to heart communication, rather than to depend on superficial TV commercials or attitudes.

“This may contradict what other main-stream brands are doing, but I believe in it”.

Kato believes that educating staff to become cross-functional, multi-skilled professionals is very important. At least this is what he was taught when he started off in the fashion industry.

“If we can educate employees here, they can use their skills in other companies.

“That would benefit the entire fashion industry—not just one brand”.