The model has the same colourful details, inside and out, as the original mausoleum.

An intricate scale model of one of Japan’s most important lost architectural treasures has returned to Japan on loan, after more than a century in the UK.

Part of the Royal Collection—one of the largest and most important art collections in the world that is held in trust by the sovereign for her successors and the nation—the model is a 1:10 scale recreation of the spectacular Taitokuin Mausoleum.

The original mausoleum was built in 1632 in the precincts of Zojo-ji temple in Tokyo as a memorial to Tokugawa Hidetada (1579–1632), the second Tokugawa shogun.

The model was commissioned by the City of Tokyo for the 1910 Japan–British Exhibition in London, where it was displayed alongside 13 other small-scale models of Japanese buildings.

The work of the finest carpenters, lacquer artists and sculptors of the day, under the supervision of experts from the Tokyo School of Fine Arts, the model was 3.6m wide, 5.4m long and 1.8m high, making it one of the main attractions. 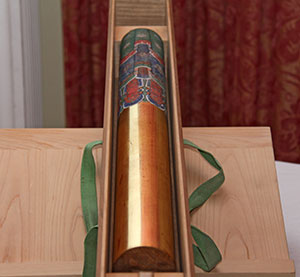 The Pillar of Paradise from the Taitokuin Mausoleum

Staged at White City in London, the event was designed to project a positive image of Japan and enhance trade between the two nations. As well as the models, the exhibition included demonstrations of Japanese crafts, music, sport and entertainment, and attracted 8mn people—the vast majority of whom were getting their first glimpse of things Japanese.

The visitors included Queen Mary and King George V, to whom the model was presented at the conclusion of the exhibition. It was later on public display at the Royal Botanical Gardens in Kew, and subsequently placed in storage.

But it acquired newfound importance in 1945, after the mausoleum was destroyed in wartime bombing raids on Tokyo.

“The significance of this extraordinary model has greatly increased, owing to the loss of the original building and its site”, said Jonathan Marsden, director of the Royal Collection, at a press conference at the British Embassy Tokyo to announce the return of the model to Japan.

“On behalf of Her Majesty the Queen”, he added, “I am responsible for the care of this magnificent work of art in the Royal Collection, so I am delighted that, thanks to this remarkable partnership between the Royal Collection Trust and Zojo-ji, the model is being restored by the very best craftsmen so that the people of Tokyo can fully appreciate one of the great architectural glories of Edo”.

The model is currently on display at the temple, an appropriate location given Zojo-ji’s connection with the mausoleum. It is the centrepiece of a public exhibition to commemorate the 400th anniversary of the death of the founding Tokugawa shogun. 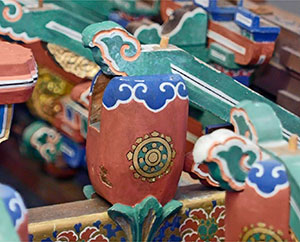 Marsden said that the model is on an open-ended, but long-term, loan from the Queen.

“It brings me heartfelt joy that, by the gracious permission of Her Majesty Queen Elizabeth II, the model of the Taitokuin Mausoleum will be returning to Japan, after more than 100 years, for public display”, said Bishop Tatsuyu Tomoda, chief secretary of Zojo-ji temple.

“The model is a precious artefact documenting the early years of Zojo-ji”, he said, adding that until now the temple has only had black-and-white photos that give a limited sense of the splendour of the elaborately decorated mausoleum.

The building became a template for all subsequent mausoleum architecture, in particular the distinctive exploitation of every surface for decoration.

The model recaptures, in intricate and colourful detail, both inside and out, the three interlocking buildings of the complex: the main hall (honden), the worship hall (haiden) and the connecting hall (ainoma). The replica faithfully incorporates the materials and techniques used in the full-size building, including thousands of miniature copper roof tiles, each the size of a thumbnail.

Conservation work carried out in Tokyo after the model was shipped from the UK has focused on the main hall, and included repairing and cleaning the roof tiles, the lacquered timber framing and doors, the bamboo blinds, the intricate Tokugawa family crests and the gilded wall paintings of the paradise of Amida, a celestial Buddha.

The two Pillars of Paradise, which flank the main altar, have also been carefully restored, while the large fence that surrounded the mausoleum has been cleaned and reassembled.

“I am absolutely delighted that, after so many years, the Taitokuin model is returning to Japan”, said British Ambassador to Japan Tim Hitchens CMG LVO.

“In 2008, His Royal Highness The Prince of Wales visited Japan and presented one of the model’s pillars to the vice-abbot of Zojo-ji temple.

“Now the whole model is back”, he added. “It is a wonderful symbol of the way in which Britain and Japan can work together to bring, to the wider public, exceptional craftsmanship of profound historical and political significance.

“The model brings back to life what was lost in flames and thought irretrievable”, he said.