Is it just me, or is autumn the most beautiful season in Japan? Spring blossoms are stunning, of course, as are the clear blue skies of winter. But, for me, the season’s wonderful diversity of colours and the mild weather represent my favourite time of year. Oh dear, I’m turning Japanese—beginning a column by talking about the weather. But, of course, many events in Japan follow the seasonal pattern and occur at particular times of the year. 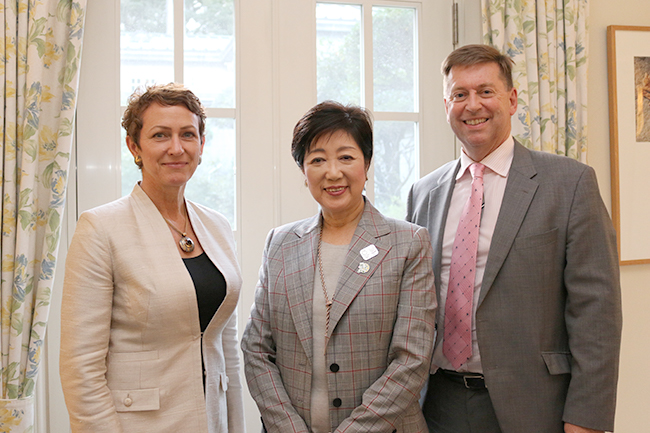 October is always a science month, with Kyoto hosting the annual Science and Technology in Society (STS) forum, a big event in the global science world. Professor Patrick Vallance, the British government’s new chief scientist, was here to attend the discussions, after which I accompanied him on some of his Tokyo calls. The Shintomi nursing home was particularly interesting. They are pioneering research on practical applications of robots to help elderly people and their carers with activities such as lifting, walking and providing empathy to help reduce feelings of loneliness.

We also visited the Japan Meteorological Agency and saw its disaster coordination centre, which swings into action when floods, typhoons or earthquakes strike. As you can imagine, they have been pretty busy this year. They have a bank of screens where you can watch all the live volcanoes in the country puffing away.

It’s also the season in Tokyo for the Praemium Imperiale, one of the world’s major arts prizes, which each year honours prominent artists in the fields of architecture, music, painting, sculpture and theatre/film. Actress Catherine Deneuve was a prominent winner this year. And my friend Andrew Jackson was here to pick up the youth prize for Britain’s Shakespeare Schools Foundation, a cultural education charity that he chairs. 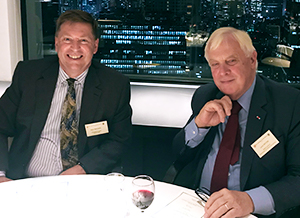 With Lord Patten, the UK judge for the Praemium Imperiale

The UK judge for the Praemium Imperiale is Lord Patten, the polymath politician who seems to have held every imaginable political post: Tory Cabinet Minister, last governor of Hong Kong, European Commissioner, chairman of the BBC, and chancellor of the University of Oxford. He’s also found time to write many fascinating books about current affairs. He gave a very amusing talk to the Cambridge and Oxford Society here. 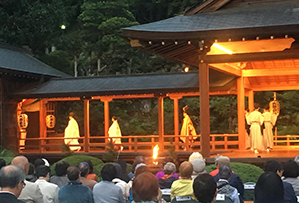 We were invited to the annual Takigi Noh performance at the Meiji Jingu shrine. This takes place under torchlight, which makes the backdrop of the historic shrine buildings look even more striking. We were also privileged to attend a recital at Suntory Hall by Dame Mitsuko Uchida, one of the world’s greatest pianists. Now based mainly in London, her partner is one of my former colleagues at the Foreign & Commonwealth Office who served at the embassy here.

October also brought a great production of the ballet Cinderella, by UK choreographer and dancer Sir Matthew Bourne OBE. The production by his dance company here from the UK is set, poignantly, in London during the Blitz.

The embassy’s Trade and Investment team is having a busy autumn. A large group of UK firms were in Yokohama for the BioJapan trade show and conference. I went down to speak at the opening ceremony, alongside several Japanese government ministers and Lithuanian Prime Minister Saulius Skvernelis.

The House of Commons International Trade Committee was also here as part of their enquiry into UK investment policy. In addition, the annual nuclear talks took place, bringing together regulators, scientists and business. Trade Secretary Liam Fox announced the appointment of Lord Trenchard as a special representative to support our work on UK–Japan financial services. Some of you will remember Hugh Trenchard from when he lived here as a banker. He is currently vice-chairman of the All-Party Parliamentary Group on Japan in the British Parliament, so is well qualified to take on the role. I accompanied him when he called on several ministers here, including Deputy Prime Minister and Finance Minister Taro Aso.

I was delighted to work with the British Chamber of Commerce in Japan (BCCJ) to take advantage of the visit by Dame Inga Beale, CEO of Lloyd’s of London. At my residence, I hosted a roundtable on diversity, at which Executive Director Lori Henderson MBE ably chaired an excellent discussion between Beale and Tokyo Governor Yuriko Koike. The governor was about to visit London, both for a closer look at our experience in hosting the London 2012 Olympic and Paralympic Games, and to take forward cooperation on financial services.

The Paralympics in 2020 will give a big boost to diversity in Japan, as it did in London. British Paralympic Association CEO Tim Hollingsworth was here in October for talks with his counterparts. I hosted a dinner for him with officials from the cities of Yokohama and Kawasaki, as well as the president of Keio University. The two cities and the university’s Hiyoshi Campus will be hosting the British team’s training camp.

I addressed the Japan Federation of Bar Associations on the death penalty, explaining how and why Britain had come to abolish capital punishment in the 1960s and setting out the reasons many countries hoped Japan also would move in this direction.

I always enjoy attending BCCJ business award ceremonies (page 16) and handing out some of the prizes. It’s something I’ve done in other countries, too, and it gives you a real feel for the breadth and quality of the activities of UK businesses in the market. It’s also fun to see everyone dressed up in their finery, just like the Oscars.

British troops on the ground in Japan

I travelled down to JGSDF Fuji School, North Fuji Maneuver Area and Ojojihara Maneuver Area with Lieutenant-General Patrick Sanders, the number two in the British Army. There we watched joint exercises between the Honourable Artillery Company and the Japan Ground Self-Defense Force (page 26).

It’s the first time such exercises have been carried out on Japanese soil by a military force other than that of the United States, so it was a symbolic event and a vivid demonstration of our strengthening bilateral defence ties. I was wishing I could join them up in the helicopter until Sanders described to me how he’d twice been shot down in helicopters in action in the Middle East. It was a salutary reminder of the price our forces pay for our defence and security. 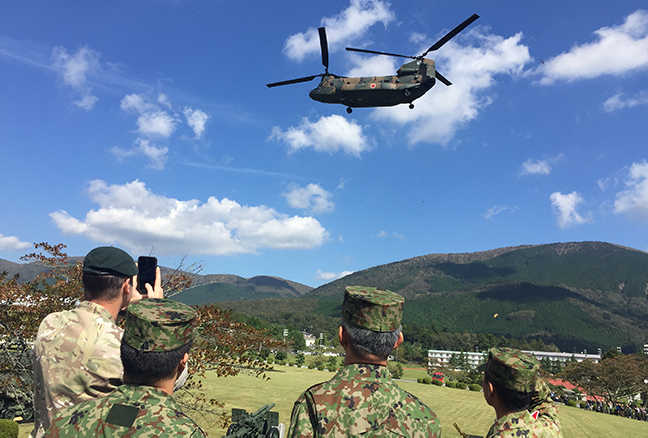 Supporting Osaka for the Expo

At the end of October, the Foreign & Commonwealth Office’s Minister of State for Asia and the Pacific Mark Field announced that the UK would be supporting Osaka’s candidacy to host World Expo 2025. It’s a reminder of the strong rivalry between the Kansai and the Kanto regions that, every time Tokyo hosts an Olympics, Osaka wants to host an Expo.

As I said in an op-ed I wrote for the Nihon Keizai Shimbun financial newspaper, I believe Osaka would do a great job as a host city. I was the British official in charge of the UK Pavilion at Expo 2005 in Aichi Prefecture, and remember how well everything worked there.