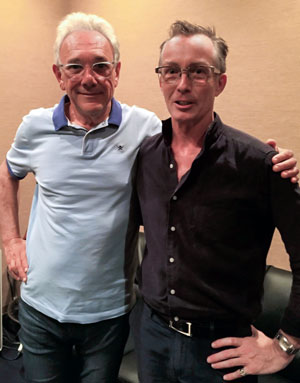 Back in the late 1970s, British bass player and music producer Trevor Horn CBE predicted that computers would one day make music. He had been reading a lot of science fiction and was inspired to form the electro-pop group The Buggles and create music on electronic equipment, keyboards and synthesizers. They wrote the smash hit single Video Killed the Radio Star, which became an iconic moment in global music history as the first music video played on MTV. It is a song that unofficially defines the start of the generation of music known as new wave.

I had the pleasure of interviewing Trevor Horn in Tokyo in August when he was in Japan touring with his Trevor Horn Band. Their live set comprised the big hits he has produced for many artists over the years, including Yes, Frankie Goes to Hollywood, 10CC, Grace Jones, Seal and others.

The idea of a producer playing their artists’ songs could be seen as vanity project folly and a potential disaster. Yet Horn pulled together a team of exceptional musicians and vocalists, something he has done in the studio for years. They nailed the tracks just as a fan would want, including a raucous rendition of Video Killed the Radio Star.

Of this song, Horn said, “I could feel it was all going to change—I had this idea that people would start making records with computers. It seemed like a crazy idea back then, but of course it’s exactly what’s happened”. I asked if he loves the technology now, and he said, “Yes. It’s made making records easier. It doesn’t help you make good records, but it certainly helps making average records easier”.

Studio as instrument
I first consciously became aware of Horn when he produced another smash hit single: Owner of a Lonely Heart for Yes in 1983. I had just started my first paying gig at a radio station and was awestruck to have access to professional studios. I remember hearing the record for the first time and playing it over and over again very loudly in the studio, which had fabulous monitors. All of the sounds Horn squeezed and edited into that piece of music, with big and bombastic results, meant it was the perfect track for a studio sound system.

It was the moment I discovered a studio itself can be used as a musical instrument. I wondered when Horn’s defining moment was?

“I was a working musician from the age of 16 and every time we went into a studio to record I would always go into the control room afterwards to listen, and that was when I decided this is where I want to be. The speakers sound fantastic, it’s air conditioned, nobody disturbs you. The studio’s where it’s going to be happening now”. A synthesized reality, I thought, just where Horn obviously feels comfortable.

Keeping it real
The big, bombastic sound is what Horn is known for, but he has produced mellow tunes, too, including most famously Seal’s Kiss From A Rose. I wondered if being a bass player is the reason he likes that big sound?

“Nah, I just like big records” he replied, adding, “What’s the point in pretending to be something you’re not. I might as well do something that I’m good at rather than being somebody else. The worst thing is to work with people and they tell me, ‘I don’t want it to sound like one of your records’”.

So Horn was delighted with a recent project creating the soundtrack for the NHK animation series The Reflection Wave One, where the producers simply gave him song titles—including Sky Show, The Future of Happiness and From Battle to Flight—and told him to be true to himself as well as give it the big Trevor Horn sound.

Many of the iconic albums Horn produced are immersive soundscapes, such as the jungle vibe of Frankie Goes to Hollywood’s iconic Welcome to the Pleasuredome, of which Horn said, “That intro is very strange, we were all a bit crazy when we did that”. And of the intimate sounds of Grace Jones’ album Slave to the Rhythm, Horn said, “When you work with Grace, you can’t help but get involved with her idea of herself as an art object”. So, ultimately, the artist inspires the producer, who magnifies the art.

The end of our conversation briefly touched on his work with Art of Noise in the mid-1980s. They were experimenting with the new Fairlight computer and the possibilities of sampling sounds, which were then used as musical notes. It was more fun with more toys in Horn’s favourite place—the studio.

Just like Horn, I’m a very happy man in the studio. He may have got right the prediction that music would be created on computers, but I’m holding out that his lyric “video killed the radio star” won’t come true just yet.