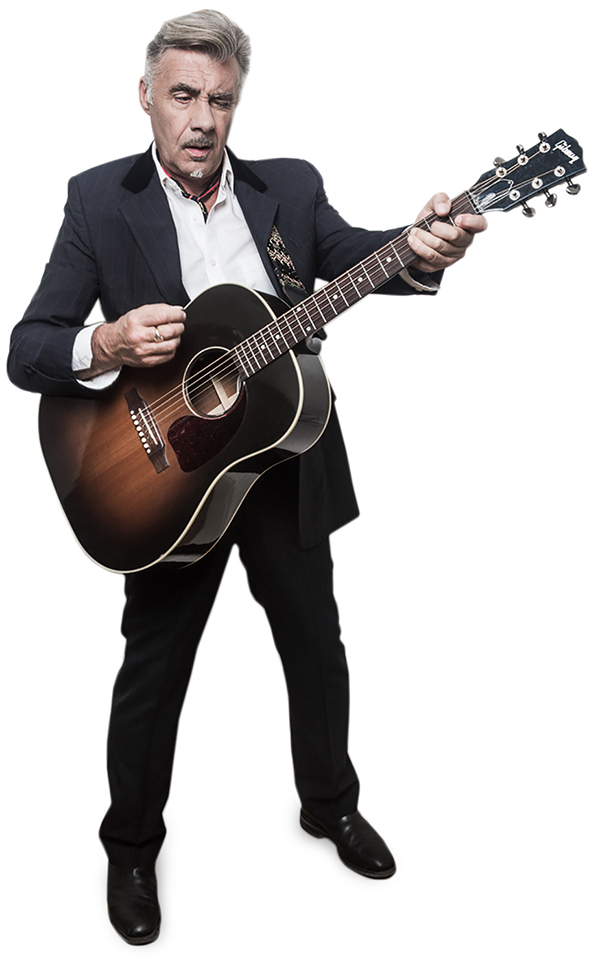 When you meet a member of the Sex Pistols, you anticipate meeting a skinny, pale, spotty, spiky-haired person in ripped clothes. But when I met Pistols’ bass player Glen Matlock at Fuji Rock Festival 2019, I was greeted by a tanned, floppy-fringed, handsome and healthy looking gent with not a ripped garment in sight.

“You’re suntanned!” I say out loud. “I’ve been here, there and everywhere this summer,” Matlock replied. “I was in the States, which was hot. I was in France, which had a heat wave. I went to this beautiful island called Porquerolles, just off Toulon. It’s been quite nice in England—we had a heat wave, too. I was glad to be coming to Japan to cool down a bit”.

He missed our heat wave by about 24 hours.

I’ve interviewed Matlock before—in 2014, in the air-conditioned comfort of a radio studio in Tokyo—but this time we’re outside enjoying the mountain air at sunset, and he was keen to talk about Fuji Rock and his current band, Glen Matlock and The Tough Cookies.

“It was great. We played last night—a bit wet—and they stayed all the way through. It was a good night. I even heard that one of The Chemical Brothers was there and really dug it”.

The Chemical Brothers headlined the festival the previous evening and stayed around to enjoy themselves. Matlock was also noticeably having a good time. “That’s what I’m trying to do with my band at the moment. You know I’m older, I’m not going to be top of the charts, I just want to do what I want to do”.

The current Tough Cookies line-up includes legendary guitarist Earl Slick, who famously played with David Bowie for a number of years, and also collaborated with John Lennon and many other big names in music. 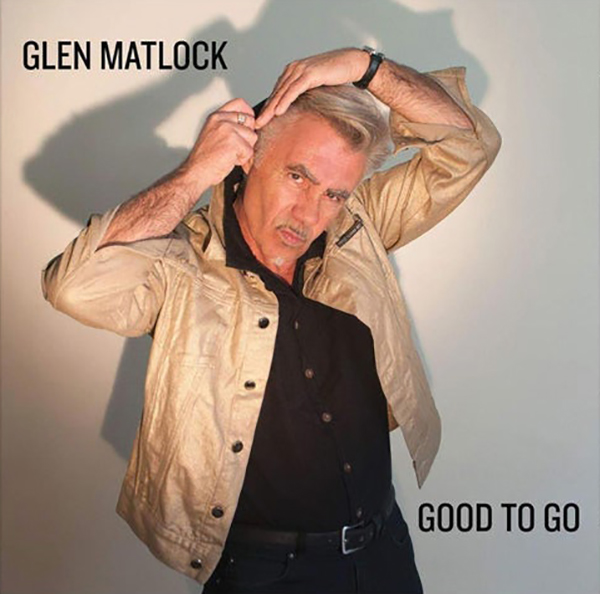 “I met Earl about 10 years ago, got involved in a project by a mate of mine who’s a fashion designer and thinks he’s a singer, and we got on great,” Matlock recalls. “You know, in the music business, there’s loads of projects that don’t normally come to fruition, and that was one of them. But it was fun, and I met Earl through it. And then, when I was thinking about doing this album, Good to Go, which came out at the tail end of last year—which you’re going to be playing several tracks from on your radio show—everything fell into place”.

Matlock has performed with a number of famous names himself. I asked if there was a favourite? “Well, I think the Faces”. He recalled the previous time he played at Fuji Rock Festival, in 2011, with legendary British band the Faces. The line-up included original member and Rolling Stones’ guitarist Ronnie Wood.

“Yeah, I was playing with my all-time favourite band. It was the band I stood in front of the mirror when I was 14 and couldn’t play, pretending I was in them. It was great. It was a blast really. And that band­—to me it was the band that opened up the door to all kinds of music: The Temptations and the blues, and Bobby Womack, The Staple Singers—there’s a lot going on in that band, and they play so great. And they’re a laugh and all. They have a laugh about everything, all the time—always, it seems”.

He continued talking about the Faces and their late, original bass player. “Ronnie Lane’s bass lines were fantastic, and I kind of learnt to play listening to their records”. 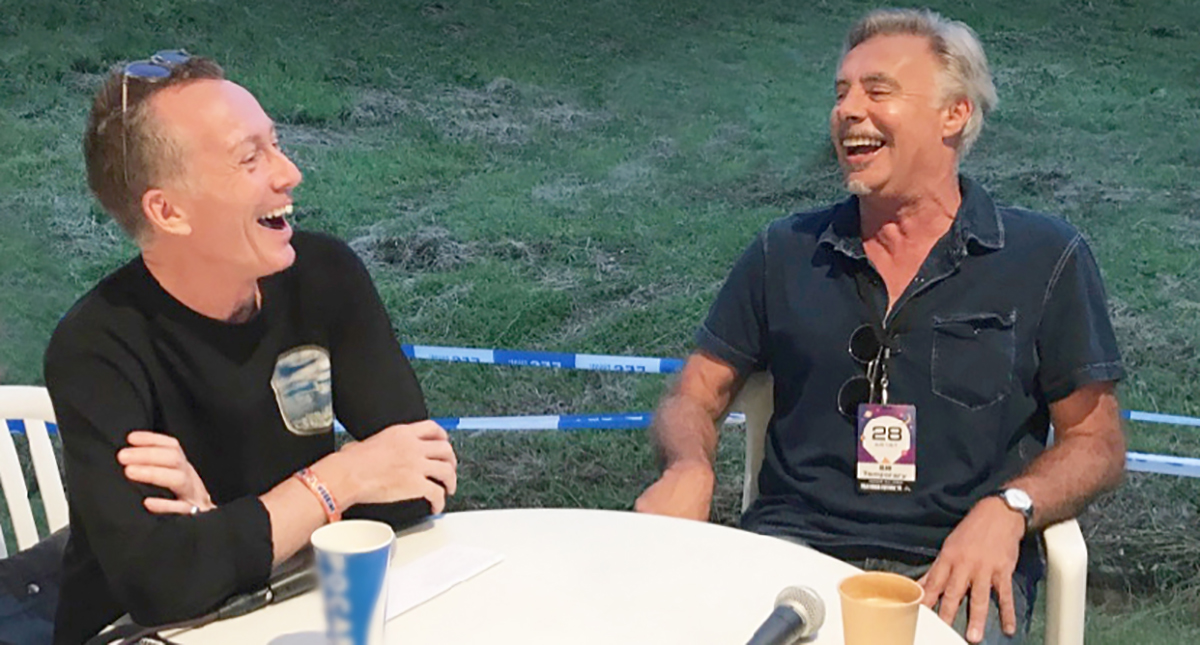 When Matlock was approached to join the 2011 line-up, he was asked, “Are you going to be alright with this?” He replied: “Yeah I know this stuff backwards. It’s just forwards I struggle with!” He told me, “I think that got me the gig”.

Matlock remembered a special moment with the Sex Pistols. “I think one of the best sense-of-occasion gigs was the first time I ever went to New York. We were playing with Iggy Pop at this place called the Palladium. It was Halloween—back then we never really celebrated Halloween—and the whole audience was dressed in Halloween outfits, The Cramps supported us, and backstage was Debbie Harry dressed as a witch who gave me a kiss on the cheek. It was fantastic”.

I wanted to know more about Matlock’s early years at Saint Martin’s School of Art in London in the mid 1970s. “Well, I could draw a bit—haven’t done any for years now—but I was interested in art school because I’d read that nearly every band I liked from the ’60s had formed at art school. So I wanted to get into a band somehow, and also art school was kind of important—not so much for what you learn there, but, back then, you didn’t want to work, you wanted to do something with your life but you didn’t quite know what it was. [Art school] is breathing space, and it allows you to get your ideas together.

As it happened, I met up with the Sex Pistols outside of art college and took them to art college—not to do drawing, but there was a scene. So, the first gigs we did, that I booked, were another college: Central School of Art. We also played at Chelsea School of Art. They were the only places that would have us, but were full of the people who were a bit outlandish. And that was part of the birth of the punk thing. They were the first people to have kind of shorter hair in the ’70s, and Saint Martin’s was famous for fashion, so everybody looked outlandish even back then”. 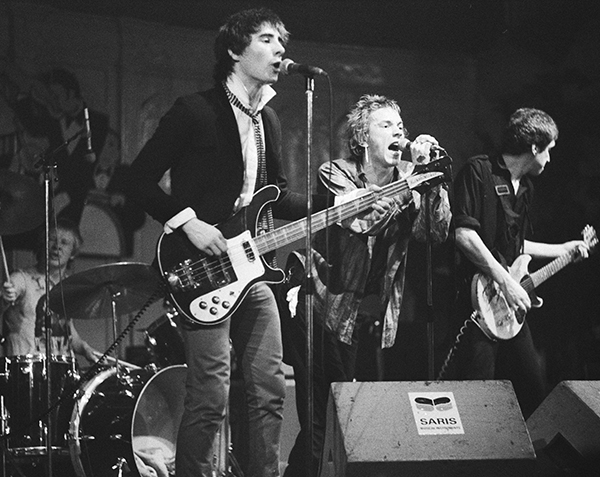 When we look back, the Sex Pistols were such a short moment in cultural history, but exerted an influence that still resonates 40 years later. I wondered whether, at the time, in the eye of the cultural storm, it felt as big as it does now?

“Yeah, I think even right from the get-go we knew we were on to something, because we were in the right place at the right time. And we had the right people around us, like Malcolm McLaren. We all met through his teddy boy shop, which was originally called SEX. It was right in the wrong end of Kings Road next to Granny Takes a Trip where people like the Rolling Stones got their clothes from. And Bryan Ferry would be swanking down the street and Malcolm thought they were all kind of—here’s a good English word—tossers, and we did, too. We had no money, nothing. But it gave us an attitude, so we thought we were right and they were wrong, even though they were all multi-millionaires. We were wrong and they’re still multimillionaires and we ain’t. But you know, we did something”.

And Matlock is still doing that “something” today—maybe in a more genteel way—in his everyday life, until he gets on stage.

“I think you’re the person on stage that you can’t really get round to doing in the daytime. It’s your chance to show off. My girlfriend says, ‘All you do is show off!’ Yeah? What’s wrong with that? And get paid for it”.