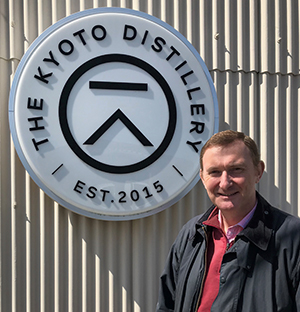 “I make gin for a living” is quite a conversa­tion opener and icebreaker—literally, sometimes, I’d imagine for someone in the drinks business. And that is exactly the world in which British gin distiller Alex Davies spends his time. I sat down for a chat with him in Kyoto after having a personal guided tour of the KI NO BI craft gin distillery.

The buzzword craft has re-invigorated the drinks industry globally, and Japan, too, has been swept up in the boom.

The word craft generally comes with the image of a hand-crafted product and premium price, but has no precise definition within the industry. Thus it has been used liberally by major drinks firms, in the process misleading consumers about the true meaning and value of the term. For this reason, creating a genuine craft product with a unique story is extremely important to boutique brands, and is something KI NO BI is doing with a passion.

KI NO BI Gin is the brainchild of David Croll, long-time member of the British Chamber of Commerce in Japan and the recipient of the Entrepreneur of the Year award at the BCCJ British Business Awards in 2010.

After having spent 20 years importing Scotch whisky into Japan, Croll decided to turn things around and create something special from Japan and, most important, from Kyoto, the undisputed cultural capital of Japan. Following a chance meeting in the UK and discussions, Croll brought Davies to Japan in 2015 to head up an as yet incomplete distillery.

Japanese ingredients
For Davies, coming to Japan to create a product from scratch was somewhat daunting, but immensely exciting. He had not previously been involved with Japanese culture or business.

“The first thing that went through my head was ‘I don’t know any Japanese ingredients’. It was a huge and very steep learning curve”, he explained, “where I had to spend a lot of time eating and drinking, just getting to know all the flavours Japan and Kyoto have to offer”.

The explosion of new flavours that Davies was discovering and the chance to create a global first meant he could have gone off in a multitude of directions—but the attention to detail was key.

And a mandate for that perfection was to source as many of the ingredients as possible from Kyoto Prefecture. 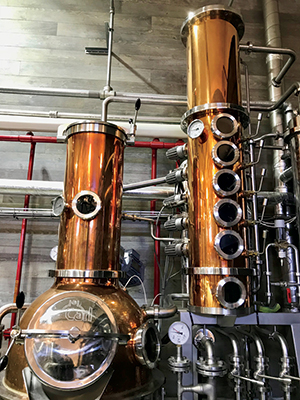 Distilling equipment at KI NO BI

“We source the water from a Fushimi sake brewery called Tsukino Katsura—very famous for the ground water—30min away from the distillery. Lemons, yuzu [a round, yellowish citrus fruit with fragrant, acidic juice] and ginger come from Ayabe; red shiso [a plant of the mint family, native to eastern Asia] from northern Kyoto, tea from Uji [a small city situated between Kyoto and Nara] and hinoki wood from Kyoto”, Davies said.

The woodblock print label design was a collab­oration with a Kyoto atelier, founded in 1624, that makes beautifully crafted karakami paper.

Distilling gin in Kyoto is something that had never been done before and has created it’s own unique set of challenges—jumping through bureaucratic hoops to get a distilling licence and meet tax and fire authorities’ rules.

Through perseverance, patience, introduc­tions and respect for the local ways, KI NO BI has built trust in Kyoto. “I think we’re extremely privileged to be working with a lot of very old, respected and very well-established companies. Now that we’ve established ourselves in the industry and we’re producing the product that people are recognising as being very Kyoto and very high quality, a lot of these companies are offering to work with us more and more”, Davies said.

Scientist, perfumer, chef
Over time, Davies is also realising what works well for his craft of combining British and Japanese traditions. I asked what Japanese ingredient he was enjoying working with the most.
“Hinoki and the way it works with juniper. It allowed us to make the base part of our distillation a Japanese element. Hinoki plays such a big role in Japanese life. It is used for onsen baths, at Noh theatres and in Osaka castle. So many places use hinoki”.

After having seen the distillery—a fabulous Victorian-looking laboratory—and chatted with Davies about ingredients, flavours and aromas, I saw him as scientist, perfumer and chef using all of his senses to create the ultimate product.

I wondered which sense he values the most.

“Possibly instinct. Of course you need to have an educated palette. Everyone can train a palette, but understanding how to design a concept and knowing how to bring that to fruition, about recognising different flavours that will work with each other, I think instinct is a big part of that.”

Finally I couldn’t resist asking Davies if, after a long day at work, does he go home and have a drink?

“Yes I do. It’s good to stay familiar, keep your palette on point”.

Judging by the success of KI NO BI and its distinctive craft, it seems his instinct and palette are bang on point. Cheers and kampai to that!