Spring is a great time of year to visit the British Embassy Tokyo. Our grounds and the surrounding neighbourhood—particularly the famous Chidori­ga­fuchi walk—are adorned with sakura (cherry blossoms). Individually, the flowers are delicate and the palest pink. But, collectively, it is as if someone has daubed the whole landscape.

We take advantage of the opportunity to host many hanami (cherry blossom viewing) parties for the contacts of the Embassy’s various teams. This year, I hosted six. Luckily, most were concentrated in the week of mankai (full bloom). Since you have to plan weeks ahead, that’s not always the case, and we had our fingers crossed.

With so many visitors walking past the Embassy during this period, we thought it was a great chance to promote British food and drink, with a seasonal theme. You may have seen the very attractive pink-tinged posters and banners featuring award-winning English sparkling wine, as well as craft gin and soft drinks, plus the British lamb that is now able to be imported into Japan.

Our location, just up the road from the Diet, means that it is not too diffi­cult to tempt members of parliament (MPs) to join us at the end of their busy day. Three Cabinet ministers were among those attending my hanami for politicians. And Deputy Prime Minister Taro Aso brought members of the Diet’s British-Japanese Parliamentary Group round for an enjoyable dinner.

We are fortunate to have so many Japanese politicians with personal know­ledge and experience of Britain, including a number who studied there. Many of the MPs thanked me for the UK’s defence and security coopera­tion with Japan, which was visible again in March with the visit by HMS Montrose.

In the space of three weeks, I found myself hosting dinners for the vice chan­cellors of three of our leading universities: Oxford, Cambridge and Durham. As a graduate of the latter two, it was a particular pleasure for me. Oxford drew alumni from all over Asia for a big annual regional event. Cambridge conducted a symposium on international collaboration with Japan’s prestigious University of Tokyo, with which they have a formal partnership agree­ment. And Durham was showcasing their links with Teikyo University which has a long-standing campus in Durham.

If Japan owns the colour pink at this time of year, I suppose Ireland has come to have a fair claim to green. It was a pleasure to watch my friend Paul Kavanagh, Irish Ambassador to Japan, leading the St Patrick’s Day parade down Omotes­ando. We will be working closely together to support the Irish team and fans at the Rugby World Cup, as it is an all-of-Ireland team. 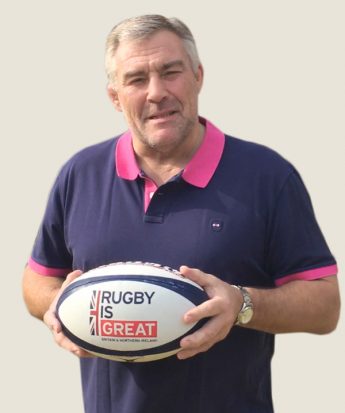 Plans for the Rugby World Cup continue apace. Jason Leonard, England’s most capped player and a key member of the 2003 World Cup-winning team, came round for tea. We discussed a charity event which he is planning to run during the tourna­ment. And several former Welsh internationals—now representing the Welsh Rugby Union—used the Embassy for a media event to talk about their plans for the tournament.

It was also a great pleasure to watch the England blind soccer team playing at an international tournament in Tokyo, and to chat with the team afterwards. It is a great spectator sport, requiring strong ball control skills and no small bravery. The team was really hoping to do well enough in the European championships later this year to be back here for the Tokyo 2020 Paralympic Games.

Also, on the inclusivity theme, we enjoyed going to watch the UK’s Stopgap Dance Company, a group of disabled and able-bodied artists, performing in Setagaya.

With the Rugby World Cup taking place in so many different locations around Japan, and our latest estimates suggesting that some 50,000 British fans will be here to support them, it is very useful that we have a network of volunteer wardens all over the country to support us. These are Brits who usually have been here for some time, are well established in their local communities, and can provide useful signposting to key local contacts in the event of emergencies. I was able to thank them for all their help when they attended their annual briefing and training session at the Embassy.

In April, England coach Eddie Jones will be giving the annual Daiwa British Embassy Ichiban Lecture at my Residence. He is a really inspiring speaker, and his thoughts on leadership are relevant to many fields beyond sport. The Daiwa Foundation continues to make a great contribution to Anglo–Japanese relations, and I enjoyed attending their March graduation ceremony for this year’s six Daiwa scholars.

Over the weekend of 23–24 March, Japan used its G20 Presidency to bring together the W20 event, with its annual World Assembly for Women (WAW). Keynote speakers included former Chilean President Michelle Bachelet and the young UK-based Pakistani Nobel laureate Malala Yousafzai, who is currently studying at Oxford. Japanese Prime Minister Shinzo Abe addressed a packed meeting, which was standing room only. The Foreign & Commonwealth Office’s Special Envoy for Gender Equality, Joanna Roper, also spoke on a panel at the event. Some of you may remember Jo from her time as head of communications at the Embassy. I also hosted a WAW side-meeting on women’s role in peace-building at the Embassy.

The previous weekend saw Carolyn Fairbairn, director-general of the Confederation of British Industry, in town to head the strong British business delegation to the B20 meeting. They came round to the Embassy for a break­fast briefing session before the event.

April marks the end of the Heisei era. I will write more about this next month. But, I would like to record my sincere best wishes—and those of the United Kingdom—to His Imperial Majesty the Emperor, who has symbolised Japan with such dignity and grace for the past 30 years.

One of the Welsh Rugby team’s greatest fans is the wonder­ful mezzo-soprano Katherine Jenkins. We went to see her performing at Shibuya’s Orchard Hall, and she came to my Residence to meet some members of the Welsh community here.

Fans of the BBC Proms are in for a treat in October and November when the world-renowned BBC Scottish Symphony Orchestra will be here for a mini-proms, including a re-creation of the spectacular Last Night of the Proms. They will feature a variety of Japanese artists, including the famous violinist and composer Taro Hakase, who fronted a media event at the Embassy that we used to announce the Proms season.