The tills are alive with the sound of music as tourists flock to UK festivals, gigs and clubs

What is your favourite UK music destination? 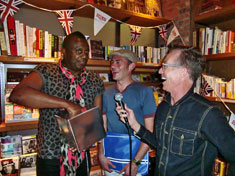 The live houses of London’s Soho district may be world renowned, but what about Liverpool, Manchester and Glasgow, which now boasts more live gigs than anywhere else in Britain?

Putting the UK’s lesser-known music capitals on the map—a physical map showing Britain’s musical heritage—is just what the government aims to do as part of its Music is GREAT campaign, according to Ashley Harvey, VisitBritain country manager Japan.

Readers may be familiar with other aspects of the GREAT campaign and the seven pillars being promoted in Japan by the tourism agency, including Countryside and Heritage. These are traditional draws that have always appealed to Japanese tourists.

Of late, the Food is GREAT campaign has been in the spotlight, as diverse branches of the government strive to reverse British cuisine’s unsavoury and outdated reputation.

Unlike food, music has held its own abroad, ever since popular affinity with British artists kicked off in the early 1960s, when The Beatles burst onto the scene. However, Harvey and his cohorts believe music as a tourism hook has not yet been fully exploited.

Inspiring travel through music is clearly a worthwhile pursuit.

According to Wish You Were Here: Music Tourism’s Contribution to the UK Economy, released by the VisitBritain head office in October 2013, music tourism added £2.2bn to the UK economy in 2012. While just 6% of music tourists came from overseas, these visitors accounted for 20% of total spend.

Inspiring travel with tunes
Harvey recognises that the Japanese market requires a degree of education, particularly when it comes to independent musicians without chart-topping hits.

In full agreement is Guy Perryman, Tokyo’s leading advocate of British bands and the host of London Hit Radio on InterFM.

Foreign artists, he says, receive very little, if any, media attention here through the pop-heavy outlets of MTV Japan and Space Shower TV.

Those who do get radio or television play are typically billboard artists. So, where does that leave up-and-coming musicians? “How do you get into the top 40 if people don’t play your music in the first place?” he wondered.

Perryman and Harvey, who also deejays in his spare time, both believe the best way to promote music here is simply to get behind the artists they like, using their years of experience in the industry to try and spot talent that is on the cusp of breaking out globally.

“We’re all chipping away at the block to bring great music, that may not be heard otherwise, to Japan”, Perryman said.

In addition to exposing audiences to under-publicised bands on his radio show, which often focuses on artists who are touring Japan during the month, Perryman says the best part of his job is interviewing music-related personalities.

Interviews are also a key part of Harvey’s activities for VisitBritain. Targeting artists who are keen to promote themselves and give back a bit, he asks simple yet meaningful questions, such as, “Who did you listen to growing up?” and, “What do you miss about Britain when on tour?”

Asking about an artist’s favourite place in the UK outside London typically forms the lead question, as communicating the value of cities outside the capital is a principal goal of the GREAT campaign.

Interestingly, Harvey said, so far everyone has responded with a different place. Plus, he added, it’s nice for Japanese to hear this from a source other than an official government message.

Taking a leaf from … One Direction?
On a local level, VisitBritain’s Japan office is plugging the music of promising UK artists primarily through social media channels. Messages in this form are well suited to the target audience, Harvey said, emphasising the peer-to-peer aspect of this type of marketing communication.

The agency uses Twitter, Facebook, its blog (in Japanese) and an email database with over 70,000 names to post artist interviews and get the word out about the latest UK artists touring Japan.

Though the band One Direction may not be Harvey’s idea of a GREAT British band, he acknowledges the influence they have had on grassroots music marketing.

Talking about how each member of the famed boy band has his own social media sites, Harvey describes the group as a “modern-day phenomenon”.

VisitBritain Japan has set its sights on audiences slightly more mature than the typical profile of One Direction fans, aiming to lure music enthusiasts in their 30s or 40s to the UK for music tourism.

“This segment of the market, particularly those who are single or childless, would find a lot of appeals in Britain”, he said.

Perryman also endorses social networking services (SNS) which, he feels, have transformed the face of radio.

“It becomes a two-way street, whereas radio has always been one-way, so we never really knew who was listening or what they were doing. Now, people send in questions during the show and we can have a real-time conversation”, he said.

It takes a village
VisitBritain and Guy Perryman are not alone in their UK music evangelism. The tourism agency works closely with P-Vine Records, a local soul/blues/funk label that often brings British artists to Japan.

These events were promoted through the SNS channels of both VisitBritain and Guy Perryman, and received coverage in the Blue Note Group’s regular newsletter, which has a run of about 80,000.

The September event included an appearance by UK band Brand New Heavies, who happened to be playing at Blue Note the following evening. Harvey describes how they had a line out the door for that show—on a Tuesday night.

The agency is looking to link up with Billboard Live for an expanded events programme in 2014, beginning with a series of gigs from 12 to 17 February. Supported by Virgin Atlantic, Stone Foundation will visit Japan to promote the music heritage of the UK.

Perryman also points to the good work of local promoters who do wonders for importing British music.

Fuji Rock, the brainchild of Smash Corporation’s Japan representative, was modelled on Somerset’s iconic Glastonbury festival. The line-up each year is consistently dominated by British bands, which, according to Perryman, all covet a performance slot during the three-day outdoor event.

Fuji Rock is “like no other festival”, he said, “because it truly merges the best of the Japanese character with the British festival spirit”. 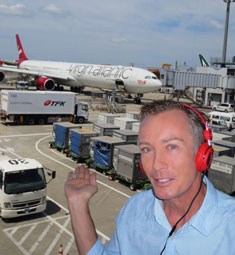 DJ in the sky
Perhaps one of the most innovative promotion activities for UK music yet took flight on 6 September on a Virgin Atlantic plane bound for London.

Perryman has been working with the airline on and off for years to produce their pre-recorded, in-flight programmes. With the landmark DJ in the Sky event, however, he took it up a notch—literally.

Perryman did a live show in the air that lasted eight hours—five at the Upper Class bar, which has seating for four, and three hours at the self-serve counter in the Economy Class cabin.

Throughout the programme, he interviewed passengers, crew and even the captain. Virgin’s management has already proposed that the event be repeated.

DJ in the Sky pre-recorded programmes can be heard on all Virgin Atlantic Airways flights, so anyone travelling with the airline can send in a dedicated message and/or song requests.