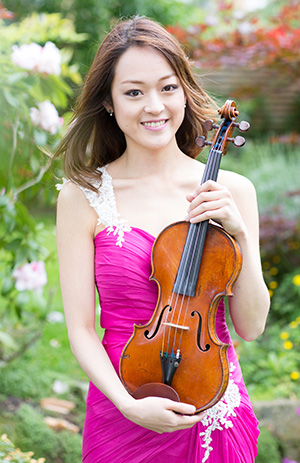 Midori Komachi is a solo and chamber violinist.

Inspired, talented and exciting are just three words to describe Midori Komachi, an up-and-coming violinist who has developed a cultural exchange project between her native Japan and the UK, where she has lived for the past 12 years.

A solo and chamber performer, Komachi read a Masters in Music at the Royal Academy of Music in London. She has appeared on the BBC Radio 3 programme In Tune, and is a recipient of the acclaimed Sir Arthur Bliss Prize.

Passionate about bringing the UK and Japan together through music, she spoke to BCCJ ACUMEN about her work and how it has been received.

BCCJ ACUMEN: What triggered your interest in music by British composers?

During my studies at the Royal Academy of Music, I undertook a series of research topics that I was keen to explore through my concerts. I founded a project called “Music of Britain and Japan: A Cultural Exchange”, which explored cultural exchanges between Japan and the UK since 1885, and how this brought inspiration to the musical life of both countries.

My second project was “Delius and Gauguin”, which illustrated the exchanges between French artist Paul Gauguin [1848–1903], and English composer Frederick Delius [1862–1934]. Through the development of this work, I came across so much wonderful music that I had never heard before. I realised there are still many great pieces to be performed, other than the popular pieces that people know already.

As I researched British composers, I found many valuable sources, such as letters, concert programmes and manuscripts accessible at the British Library. I was fascinated by these archived treasures, which gave me an insightful background to music composed in the UK. Gradually, I felt that it is the responsibility of an artist to bring these forgotten sources alive by making them into sounds and communicating them to the audience.

Does Japan have an interest in British composers?

How do you hope to boost British music?

Earlier this year, I started a collaboration with Studio 18—an online studio promoted by Takashima Artists Management—to write about British composers in my own online column called “London Studio”. This has been a great platform to foster wider interest, and I aim to give further insights on music through these articles.

In September, I appeared on the Tokyo radio programme Café Figaro, with journalist Naoki Hayashida, to discuss British composers. I had happened to come across his article about the great British composer, Gerald Finzi. He talked about Finzi’s works—which had always been of great interest to me—and I decided to write to him.

We met for the first time following my lecture recital at British House Yokohama in November 2014, and talked about common interests in British composers. I was thrilled to be invited on his radio programme and enjoyed our conversation.

Most recently, on 10 November, I was joined by pianist Simon Callaghan to perform an eclectic programme of works by 20th century British composers at Oji Hall in Tokyo. While Simon and I have frequently performed together in the UK—he recorded with me on my first album Colours of the Heart—this was our first time performing together in Japan. We had so much fun on the stage, and I was delighted to share the music with the audience.

I’m very grateful for the continuous support I receive from organisations in both countries.