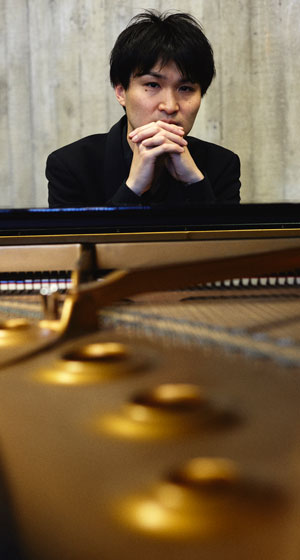 Osada finds his Tourette’s has little or no effects on him when he plays the piano.

A celebrated classical pianist trained in Manchester and based in Hanover, Germany, Yusuke Osada—who uses the stage name YUSK—has given major recitals in London and Manchester. Adding to his achievements are awards from such organisations as the Beethoven Society of Europe.

To watch Osada give a virtuoso performance of a Bach concerto, you might not realise that music has an even more powerful role in his life than in that of the average musician. It has helped him battle a condition he has had since childhood: Tourette’s syndrome.

Fortunately for Osada, his condition was diagnosed when he was very young; many go years without knowing what they suffer from. And it was during vital teenage years at Chetham’s School of Music in Manchester that Osada deepened his passion for the piano and found effective ways to deal with his Tourette’s. Today, you would be hard pressed to find a sign of it when meeting him in person.

Many associate Tourette’s with loud and inappropriate outbursts, such as swearing, but the disorder can be characterised by other symptoms.

Although defined as an inherited, neurological condition by the UK organisation Tourette’s Action, Osada says the hereditary aspect is still under debate. Key characteristics include tics—involuntary sounds and movements. These can be debilitating for some, and are not always understood by members of the general public.

However, you would be mistaken to think that Tourette’s is a barrier for all sufferers. There are many stories of those who have overcome its trials, to the point where effects are minimal to the casual onlooker. For Osada, there is sanctuary in the piano.

Music over mind
It is said that music can be a source of healing. Back in the 1800s, classical music was used as therapy to reduce pain in various medical fields.

Perhaps it is for this reason that throughout our conversation Osada showed no obvious signs that he suffers from Tourette’s.

“I think music is a very big thing when it comes to suppressing [my] Tourette’s”, Osada began, describing how music has helped him deal with his symptoms.

“It definitely comes down to the concentration level when you’re playing”, he added, explaining why he finds that his Tourette’s does not affect him when he plays.

Osada’s father was an investment banker, and the nature of his work meant that Osada moved around a lot as a child. Born in Saga, Osada then moved to London, Switzerland, back to Japan, New York and to the UK again, before finally settling in Hanover.

His strong English accent betrays the seven years he spent in London as a child, and his time in boarding school at Chetham’s School of Music. “Those five years probably were the best five years of my life”, he said.

After that, he moved to Germany to attend Berlin University of the Arts, where he studied performance-based music, completing his undergraduate degree in Hanover and focusing solely on the piano.

“I’ve been playing the piano from the age of four”, Osada explained, acknowledging that music has always been a large part of his life.

Osada then made music his career, and after completing his masters in music, began working at the Hochschule Hannover university, playing the piano in performances that include supporting other musicians. He has been there 10 years and counting.

The Christmas period for Osada is always a busy one in Japan, and at the end of last year he gave three performances, including one at Suntory Hall. Otherwise, his year-round performances are all in Europe, with UK concerts at Bridgewater Hall and St James Piccadilly.

In March 2016 at a charity concert marking the fifth anniversary of the Great East Japan Earthquake and Tsunami, Osada had his first experience as a conductor, but even then he did not experience any of his usual tics.

“It’s funny, because I never thought about it, but even when I’m conducting it doesn’t come about. You have everyone’s eyes on you and you need to be on form all the time”.

Talking about his taste in music, Osada said it encompasses everything from rap to modern pop music. But when it comes to playing the piano, he sticks to classical which, he explained, while comparing the US with Europe, is a “completely different music world”.

“I guess you have more distinguished teachers and that’s why you have so many people from Asia [going] to Europe wanting to study”, he said, highlighting the standard of teaching at the university he attended in Hanover and the wealth of famous musicians for which Europe is known.

Awareness
Tourette’s is not widely understood or discussed in Japan, as is the case with many other neurological disorders. There exists only one non-profit organisation, the Tourette Syndrome Association of Japan, for which Osada gave a few speeches in 2015.

Comparing the way his condition is received in Japan and elsewhere in the world, he said: “I think it’s a very difficult environment for people who have Tourette’s to be in Japan because they don’t even know what it is”.

Osada remembers noticing his first tics when he was at school in Japan.

“I speak to a lot of other Tourette’s sufferers and they didn’t know until they were in university. They had to find out themselves. It’s really interesting how no one managed to give them any insight on what kind of condition they have”, he said. “So I was lucky, because somehow I got diagnosed very early”.

Moreover, Osada felt he received the right support in the UK; not from an organisation, but from friends and family.

“I was in a very good environment being in a boarding school, especially where you don’t have to constantly meet new people and have to sort of explain yourself to everyone”.

He described a time when his tics were so noticeable that he found it a challenge when on public transport. Both his motor and vocal tics have changed over time.

A large part of his symptoms, he says, are to do with “intrusive thoughts that I’m always sort of having to fight against on an every-minute basis”. It is here where music has provided solace, shifting his concentration away from those thoughts.

“I always tell people that you have to find something that you’re really passionate about, and I think [for me] it’s music”.