Heading north from Tokyo on a Joetsu Shinkansen early one Friday morning in July, the luggage racks were full of items that differed greatly from the usual briefcases belonging to salarymen. Instead, hiking rucksacks, camping chairs and collapsible tents had all been crammed into every available space. Accompanying them was a swarm of enthusiastic music fans, heading to the annual Fuji Rock Festival ’17.

This summer’s festival brought more than 125,000 people from all over the world to the secluded Naeba ski resort in Yuzawa, Niigata Prefecture, a spectacular location that distinguishes it from any other festival in Japan. The torrential rain did not stop enthusiastic attendees who, donning waterproofs, set up their tents and made ready to enjoy three days of musical talent.

The majority of the performers in this annual fest are Japanese, but the festival’s initial inspiration came from the Glastonbury Festival, dating back to the 1970s, while British artists and attendees have always played an important role. Masahiro Hidaka MBE, president of the festival’s organiser, Smash Corporation, has consistently brought British artists to Fuji Rock since it began more than 20 years ago. It has brought so many, in fact, that Smash has an office in London.

Past memorable headliners include The Prodigy, The Chemical Brothers, Oasis, Coldplay, Franz Ferdinand, Fatboy Slim, Muse and Radiohead. This year, Gorillaz and Aphex Twin headlined two of the three days, and the best of British could also be found around the festival with daily performances by the British Embassy’s Taiko Team and a festival food favourite, the fish and chips stall 1066.

Main stage
The Green Stage is the festival’s crossroads and focal point, with attendees leaving camping chairs on the grass and returning to enjoy sets throughout the weekend. This vast, outdoor venue, lined with trees and mountains, can hold some 50,000 people.

This year, British indie band The xx made their Green Stage debut for what was their third time performing at the festival. Romy Madley Croft and Oliver Sim’s dulcet and melodic vocals echoed across the valley, the audience particularly enjoying Crystalised and Islands from their eponymous debut album. The stage also hosted 2017 Brit Award Winner Rag’n’Bone Man, whose poignant and moving performance of hit song Human drew in crowds off the thoroughfare.

The rain was relentless all weekend with many torrential showers, sending music fans to shelter under the Red Marquee. Dream pop band and Fuji Rock veterans Slowdive embraced the dismal conditions, vocalist Neil Halstead even telling the crowd, “It’s lovely to be back here. I love that the weather doesn’t change”. Their performance was atmospheric and the audience relaxed as melodies of songs such as Catch the Breeze blended with the pitter-patter of rain on the marquee’s roof.

Catfish and the Bottlemen 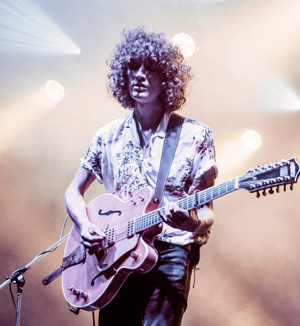 Another young band playing this stage were The Amazons, an alternative rock band from Reading who were named as ones to watch in 2017 by both the British music magazine NME and the BBC. They gave a solid performance with clean guitar riffs and powerful vocals, a throwback to the post-Britpop and rock scene of the mid-2000s. 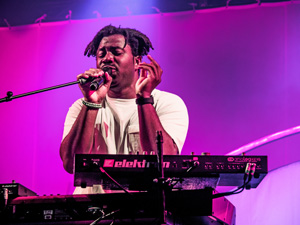 From rock to electro
No stage represented a specific genre of music, with electro or hip-hop perhaps following a heavy rock act. Sampha, another artist at the Red Marquee and pioneer in electro soul music, gave an emotional performance, his wide vocal range effortless and the keyboard sounds giving a strong nod to the blues. Known for his collaborations, it was no surprise that the crowd reacted most to Too Much and 4422 by US rapper Drake. The rest of the set was also strong and melodic, with songs such as (No One Knows Me) Like the Piano, Happens and Blood on Me from his debut album Process.

Festivalgoers were particularly excited to see headliner UK electronic producer Aphex Twin. Crowds, gathering eagerly in front of the Green Stage, represented people of all ages and from a variety of backgrounds.

For long-time Fuji fans, this performance was extra special, as Aphex Twin had performed at the first Fuji Rock Festival, in 1997. BCCJ ACUMEN even encountered a Japanese couple who, having met through their love of Aphex Twin, have been married for 10 years.

Opening with Touch Absence by Glaswegian producer Lanark Artefax, the valley was flooded with the sound of the track’s atmospheric and hard-hitting beats. The performance was visually spectacular: the screens broadcast live, distorted, footage of the crowd’s faces, all perfectly coordinated with a laser light show that danced above the crowd. During his set, the heavens opened yet again, with cold, heavy rain. Although the audience was drenched, they were unyielding and withstood the downpour, determined to stay and experience every beat.

Another highlight was British virtual band Gorillaz. Also headlining the Green Stage, their set began strongly with M1 A1 and Ascension. The band’s distinctive, genre-spanning style instantly revived the crowd, whose mood had been dampened by the rain.

After a seven-year hiatus from Fuji Rock, there was a nostalgic quality to the performance of Damon Albarn OBE—the band’s co-creator and also a member of Britpop band Blur—who sang through his distinctive remote speaker microphone. During the set he was joined on stage by the Gorillaz choir and collaborators from the new album Humanz. Larger than life appearances on the large screens by virtual members Murdoc, 2-D, Noodle and Russel lifted spirits further.

Telling the audience he was jetlagged—as he lay spread-eagled on the stage—Albarn said he was very excited to be performing at this iconic festival. The crowd, screaming for an encore, was rewarded with fan-favourites such as Kids with Guns and Clint Eastwood. Having successfully charmed the audience into singing for him as he played the melodica, Albarn thanked the crowd with a respectful bow and quietly left the stage as the audience listened to the end of Demon Days, applauding and cheering.

Family fun
When not listening to music, there were many other things to enjoy throughout the weekend. At the other end of the boardwalk that ran through the site there was a different side of the festival to discover: an area for families and children; hammocks for rent; a tent with masseuses to help ease the aches and pains of campers; an NGO village; and smaller stages, such as the Stone Circle, offering more original and interactive shows. 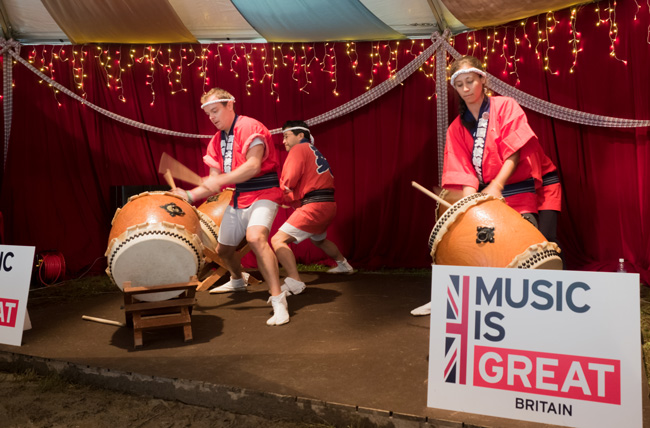 It was here that Tokyo’s British Embassy Taiko Team have played for the past two years, offering a refreshing break from the main festival. Perfectly in sync, they drew a diverse crowd as they played exciting versions of iconic British songs—such as Yellow Submarine by The Beatles—and traditional Japanese music.

“The embassy worked closely with Fuji Rock and the British Council to promote British music in Japan in the past, so luckily we had already established a good connection with some of the people from Smash”, explained David Mulholland, marketing manager at the British Embassy Tokyo.

“We’ve used the occasion of Fuji Rock to promote our Music is GREAT brand, with signage and free T-shirt giveaways to social media users … we also actively encourage followers to watch as many of the British acts at the festival as possible”.

British flavour
A day at Fuji Rock is divided into music, camping and queuing: You may need to wait one hour for the bus to the festival site or two hours to use the onsen (hot spring bath) at the nearby Naeba Prince Hotel.

However, something definitely worth queuing for is the legendary fish and chips offered by purveyor 1066, who has the longest-running food stall at the festival. It is overseen by Jane Best OBE, executive officer of Refugees International Japan, who was asked to set up a stall at the very first Fuji Rock by a friend, who had been tasked with creating a world restaurant area.

“Unfortunately, a typhoon came through. It really was wild, and of course people weren’t prepared for the torrential rain”, recalled Best. “Red Hot Chili Peppers were playing and a thunderstorm started, which was a real electricity risk. So Sunday was cancelled. We sold hot soup that year which was to our advantage as people were cold.

“It’s 20 years later and we’re a bit famous now”, she added. Over the years, many of the performing artists have come to get their own portion of fish and chips from 1066. Best laughed that her staff are much better at knowing who they are than she is. 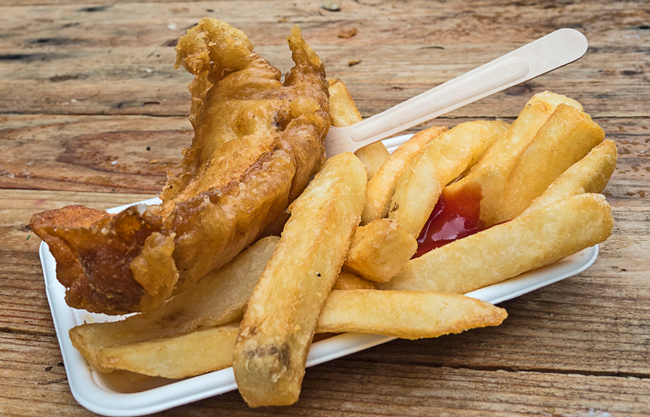 This year’s menu was fish and chips or pie which, she said, is “perfect food for a festival”. Best created the recipe for the beer batter herself. They also served a range of British drinks including Fullers London Pride and IPA, as well as Strongbow.

“It’s a lovely place to be and you meet some amazing characters … some come year after year to work on the festival, mostly from the UK”, said Best, when asked about her motivation to continue taking part.

“I think the thing about Fuji Rock is it’s not always about the headliners—there are some other interesting bands”, said Best. “Some of our customers comment on this, that the way to go and see the groups here is to look up unknown ones and go and seek them out. Some say they learn so much more about music that way”.

After 20 years it’s clear that the British music scene still strongly influences Fuji Rock’s line-up and plays a big role in attracting many attendees. The festival continues to share many similarities with its initial inspiration, Glastonbury, by bringing together a diverse range of artists and music lovers, as well as a susceptibility to temperamental weather conditions. But with its distinctive performances and spectacular visuals, all in a beautiful mountain setting, Fuji Rock lays claim to a personality of its own.