So, the Heisei era has drawn to a close and we have entered the Reiwa era. I was delighted to be here at this time, as I was serving at the Embassy 30 years ago when the Heisei era began. That earlier transition seemed more dramatic, as the Showa Emperor had been on the throne for 64 years. His reign spanned a tumultuous period in Japanese history, one that saw vast changes. I remember the Duke of Edinburgh coming to Japan for the funeral of Emperor Hirohito, and the Prince and Princess of Wales attending the enthronement ceremonies for Emperor Akihito. It was an exciting time to be a young diplomat at the Embassy.

This time round, it feels like there is much more continuity. Emperor Naruhito looks set to continue in the footsteps of his father, who played such a valuable role in promoting friendly ties with Japan’s Asian neighbours. Emperor Akihito won the respect and affection of the Japanese people by being steadfastly there to comfort them when the country suffered major natural disasters during his reign. I will always remember my call on Emperor Akihito to present my credentials when I took up my post as Ambassador in January 2017. It was a very dignified formal ceremony, following a ride to the palace in horse and carriage, and the Emperor was warm and gracious. 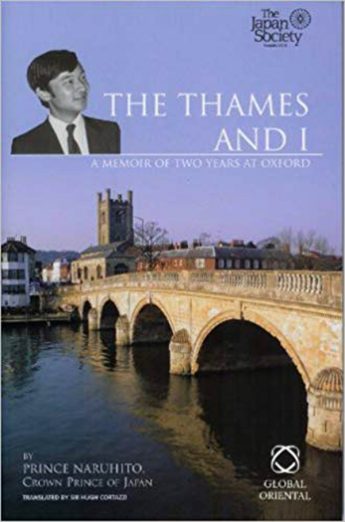 It was a pleasure to call at the Imperial Palace in late April to deliver messages from Her Majesty the Queen for both the outgoing and incoming Emperors. The warm relationship between the Imperial and Royal families is a fitting reflection of the excellent relations between our two countries. And it is particularly pleasing that—for the first time in a 2,600-year continuous dynasty—we now have an Emperor of Japan who studied at Oxford University. His Majesty has attended various events at my Residence, and I know that he feels a particular affection for Britain from his student days there. If you haven’t seen his book, The Thames and I: A Memoir of Two Years at Oxford, translated by one of my predecessors, Sir Hugh Cortazzi GCMG (1924–2018), it’s a fascinating read. 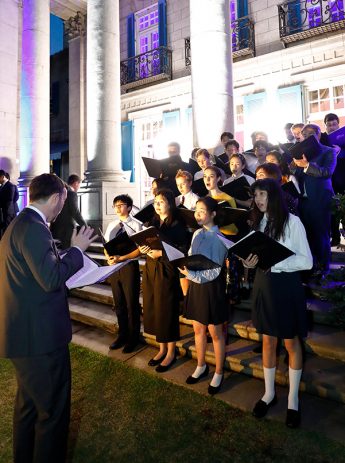 It has, in fact, been a rather Royal month. On Sunday, 21 April, Her Majesty the Queen turned 93. She is now in the 68th year of her reign. I hosted our annual Queen’s Birthday Party (QBP) on 25 April at my Residence with about 500 participants. Our Guest of Honour was Foreign Minister Taro Kono, who spoke warmly of a bilateral relationship going from strength to strength. We toasted the Queen and the Emperor with Dojima sake, now brewed at Fordham Abbey in the UK. We also showcased British beef and lamb, which can now be imported to Japan after the lifting, in January, of a long-running ban.

We used the QBP to launch our celebration of UK in Japan 2019–20, which will run from the Rugby World Cup 2019 through to the Tokyo 2020 Olympic and Paralympic Games. The year-long event will include cultural, business and sporting themes. New British Paralympic Association Chief Executive Mike Sharrock was present, and we also had an impressive display of cars from Jaguar Land Rover, which is a keynote sponsor of UK in Japan 2019–20. The British School in Tokyo acapella choir provided some great singing, alongside bagpiper Frank Hunter, and I am grateful to all the British firms who helped sponsor and support the event. 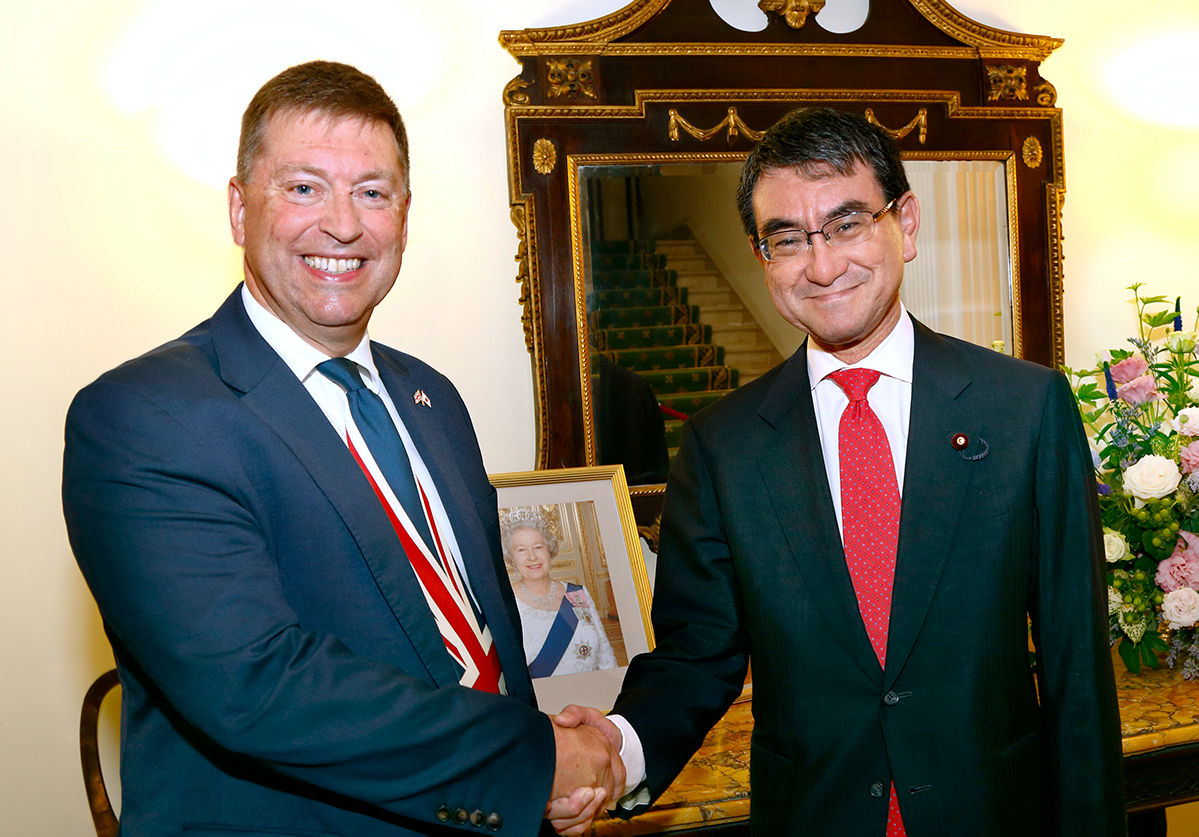 It was a huge pleasure to host England Rugby coach Eddie Jones, who gave the Daiwa/British Embassy Ichiban Lecture at the Residence. This was followed by a private dinner for a smaller group. His lessons on leadership were fascinating—in particular the importance of knowing how to moti­vate different individuals. He made some interesting comparisons on the difference between managing millennials and older cohorts, drawing nods from many present. Eddie enjoyed meeting some of his old chums from the Japan national team, which he was coaching when they had their famous win against South Africa at the Rugby World Cup 2015. I’m pleased to report that he believes we could have a couple of Home Nation teams in the semi-finals here later this year.

With a number of diplomatic colleagues, I very much enjoyed attending a 20th anniversary concert celebrating the work of Japanese choral composer Maki Ueda. My wife Sarah sang in the Ambassadors’ Wives choir under the baton of Hiroaki Kato, Maki’s husband.

Sir Danny Alexander, a former Liberal Democrat Treasury Minister in the 2010–15 Coalition government, came round for lunch. He is now vice president of the Asian Infrastructure Investment Bank (AIIB), based in Beijing. Japan remains somewhat cautious about this China-led institution, but the UK became a member in 2015 with a view to influencing the structure and practices of the new bank. At my lunch, Sir Danny was able to explain the AIIB’s current approach to representatives of a number of Japanese institutions involved in infrastructure development—an area of increasing cooperation between the UK and Japanese governments, which have established a new bilateral working group with a particular focus on South-East Asia and Africa. 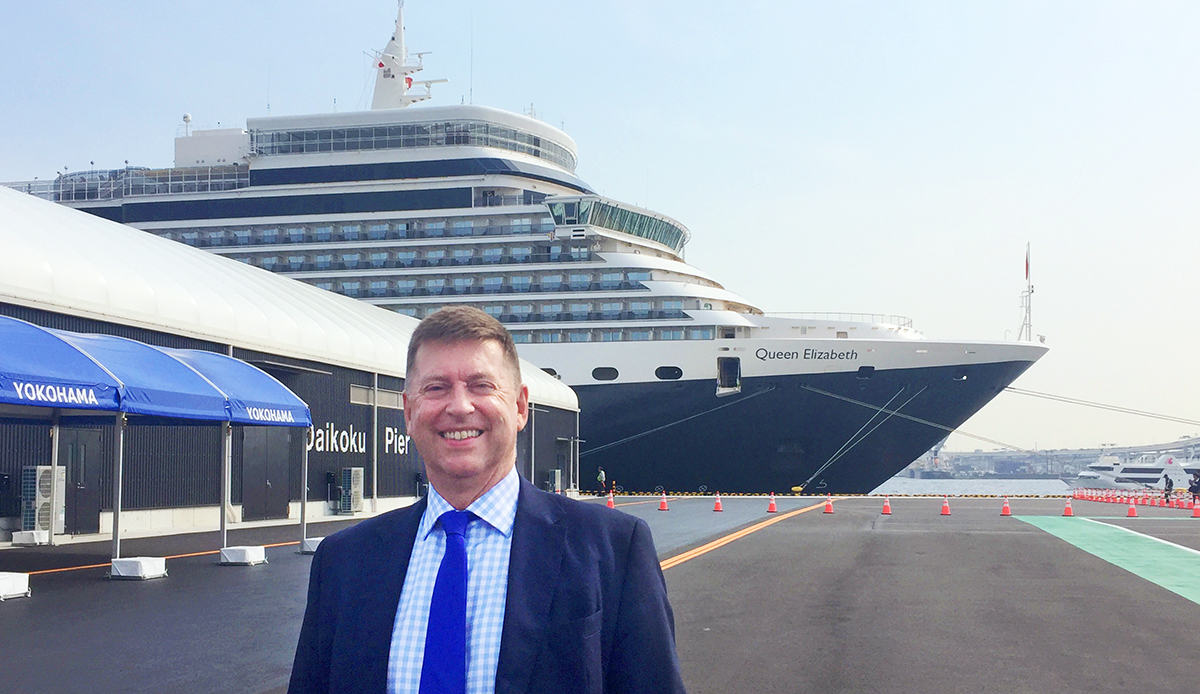 By uncannily apt timing, another Queen Elizabeth—the famous Cunard cruise liner—was in Japan in April as the inaugural ship to arrive at the Port of Yokohama’s new cruise terminal. I made a welcome speech along­side Yokohama Mayor Fumiko Hayashi, then had a tour of the splendid 2,000-passenger ship as well as lunch with the captain. I remembered visiting its sister ship, the Queen Mary 2, when it came through Singapore a few years ago. There was an excited buzz around the ship that “Mr Blair was on board”. To my amuse­ment, it turned out to be Lionel Blair—the dancer—rather than Tony.

On the same day as the QBP, I attended the Anzac Day ceremony, hosted by the New Zealand and Australian Embassies at the Commonwealth War Graves Cemetery in Hodogaya, Yokohama, where my defence adviser, Captain Paul Casson RN, and I laid a wreath. It brought back memories of participating in the very moving dawn services at the Australian National War Memorial in Canberra, when I was High Commissioner there. Significantly more British soldiers died at Gallipoli, though from a much larger population, but the campaign has a very special resonance for Australians and New Zealanders, for whom it was an important part of their coming of age as new independent nations at the beginning of the 20th century.

During April, I received a number of visitors from different ends of the fashion industry. Somehow, they had managed to choose the best time of the year to visit Japan, when the sakura were still looking beautiful. Celebrity fashion designer Sir Paul Smith (page 36), who remains hugely popular in Japan, came round for tea. Like Sarah, he comes from Nottingham, so I felt quite left out of the conversation. Dame Margaret Barbour, of the eponymous clothes maker best known for its waxed jackets, visited Tokyo to meet the firm’s agents and retailers. She told me that they have been doing good business here for a long time now. Lorna Macaulay, chief executive of the Harris Tweed Authority, also dropped by as part of her trip to Japan. She explained the very important role the industry plays in the islands of the Outer Hebrides where, to this day, the tweed is woven in the homes of individual weavers. The iconic fabric has a strong following here in Japan.

Over the Easter break, we went down to Shimoda at the bottom of the Izu Peninsula for a drive along the beautiful coastline. We visited the temple where Townsend Harris, the first US consul general in Japan, established a presence in 1856. On the way back, we stopped to admire the statue in Ito City that commemorates Will Adams—known in Japanese as Miura Anjin (1564–1620)—the first Englishman in Japan, who lived here from 1600 until his death. He became a close adviser to the first shogun, Tokugawa Ieyasu, and helped him construct Japan’s first Western ship at Ito. I remember playing the role of Will Adams in the city’s annual Anjin Festival nearly 30 years ago and being hauled through the streets of Ito in a replica sailing vessel while wearing 17th-century sailor’s garb.

Over Golden Week, we visited Seoul, South Korea, staying with our good friend Simon Smith, British Ambassador there. We had studied Japanese together in the 1980s. Visiting the demilitarised zone and the Korean War Memorial was a salutary reminder of Britain’s contribution to what is some­­times called the Forgotten War. After the United States, the UK had the next largest contingent of troops there, more than 80,000, and they suffered signi­ficant casualties. We also gained interesting insights into Japan’s complex relationship with Korea over the centuries. Whilst we were in Seoul, North Korea carried out yet another provocation, with the test launch of some short-range missiles. It reinforced the importance of our continued cooperation with the United States, Japan and other partners to maintain and enforce the United Nations sanctions.

We are heading for a particularly busy period over the next couple of months, with a number of senior Cabinet ministers, including the Chancellor and Trade Secretary, due to be heading to Japan for various G20 ministerial meetings in the run-up to the Osaka Summit on 28–29 June, which Prime Minister Theresa May will attend. 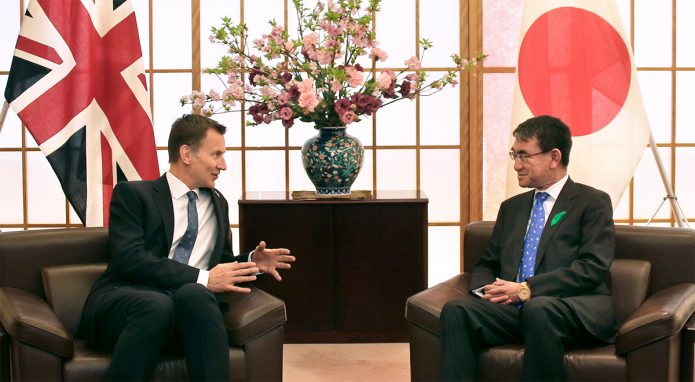 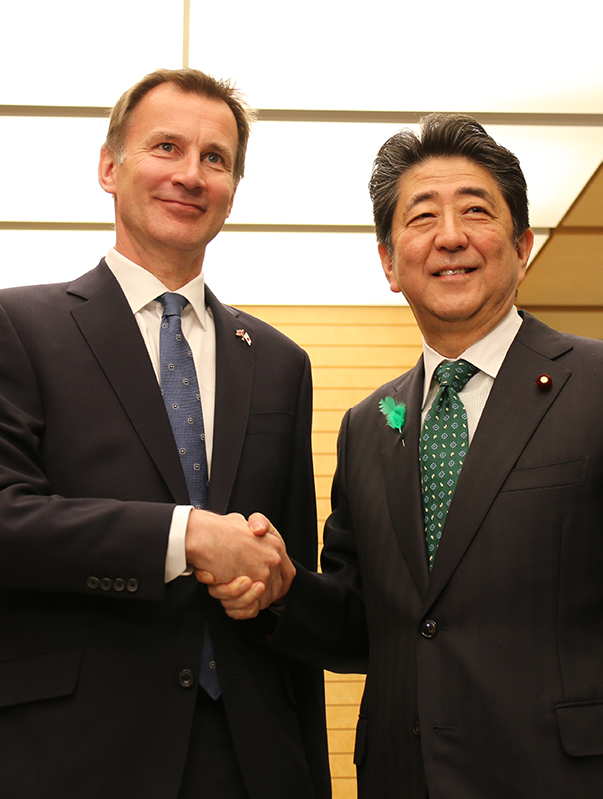 Foreign Secretary Jeremy Hunt visited again, calling on Prime Minister Shinzo Abe (right) and Foreign Minister Taro Kono (top picture) to discuss defence and security cooperation, as well as economic issues. He also met several major Japanese investors in the UK and briefed them on the latest Brexit developments. He gave an English lesson to a group of students at Tokyo Metropolitan Hibiya High School. During the lesson, he gave a speech in fluent Japanese which went viral on Twitter, receiving 600,000 views. It is a huge asset to us to have a foreign secretary who knows and likes Japan so well.