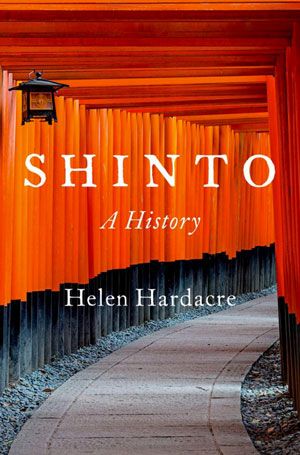 Shinto is often called the “indigenous religion of Japan” and its ancient practices are followed throughout the country, though many rites are not deeply understood by the layman. Indeed, when a Japanese friend saw me reading the present volume, he first expressed surprise that I would have an interest in the subject and then went on to say, “We Japanese don’t really understand Shinto.”

This book might well have the answer for those who don’t. According to Richard Bowring, professor emeritus in Japanese studies at the University of Cambridge, “The notoriously difficult question ‘What is Shinto?’ has finally been answered”.

If so, it takes the distinguished scholar of Japanese religions and culture, Helen Hardacre, nigh on 700 pages to provide that answer. Her meticulously researched work is scholarly and densely written. Which is not to say that it is hard work. Her writing is clear and detailed and the book is a comfortable though serious read.

Hardacre is the Reischauer Institute professor of Japanese religions and society at Harvard University. She has done extensive fieldwork on contemporary Shinto and Buddhist religious organisations, the religious life of Japan’s Korean minority and contemporary ritualisation of abortion. She has also written extensively on State Shinto.

In the volume under review, Hardacre investigates the claims about Shinto as the embodiment of indigenous tradition and its rightful place in the public realm. It is often claimed in the West that it was Shinto that drove Japanese military aggression. It is still seen as provocative for ministers and others to visit the Yasukuni Shrine in Tokyo, which honours the war dead. Hardacre makes the controversial claim that it was in fact the Allied Occupation that created this image.

For the most part, Shinto beliefs are benign. There are deities (kami) in all things, animate and inanimate, around us, and in everyday life, to some degree, we placate them.

A fine example is when someone builds a new house. It is usual to have a ground-breaking ceremony attended by a Shinto priest, whose role is to calm the kami whose “home” is being disrupted by the construction work.

Hardacre writes, “If people plan to disturb their domain by digging in the earth, planting crops and erecting buildings, it is ‘only proper’ to begin by asking permission from the kami, with prayer, food, gifts and drinks and a place for them to receive these offerings, or in which to dwell ongoingly, that is, a shrine”.

The book is finely illustrated with many photographs from the author’s own collection and there are a number of very useful tables and charts, many relating to the funding of shrines. As the promotional material states, “Hardacre’s magisterial work will stand as the definitive reference for years to come”.