Blind from birth, Rina Akiyama knew from a very young age that she wanted to stand on the podium at a Paralympic Games and have a career with a firm that valued her skills and gave her responsibilities, regardless of her disability.

A training instructor at GlaxoSmithKline K.K., Akiyama has achieved both ambitions.

“The eight years after I vowed to myself that I would stand in the middle of the podium at the Beijing Paralympics and listen to the Japanese national anthem being played were a time of constant hard work and setbacks”, 27-year-old Akiyama told BCCJ ACUMEN. 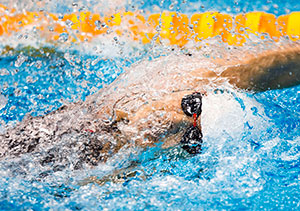 Akiyama’s speciality is the 100m backstroke.

“I was unsuccessful in my university entrance exams and I had to give up swimming for 18 months”, she said. “I was forced to change to swimming freestyle—even though I held the world record in backstroke—because the event was abolished for the 2008 Beijing Games.

“I experienced many disappointing races where success was almost within my reach, but I could not quite grasp it”.

According to Akiyama, who is from Isehara City in Kanagawa Prefecture, she came close to “giving up on my dream many times”, but was always spurred on by the image in her mind of having that gold medal placed around her neck.

“When I found out that I had won the gold medal—by a mere 0.12 seconds—[at London 2012] I just burst with joy and threw my arms in the air”, she said. “And as I felt the gold medal in my hands, I was truly glad from the bottom of my heart that I had continued swimming and stuck it out”.

After graduating with a degree and post-graduate qualifications in criminal law from Meiji University, Akiyama wanted a career in training or recruiting. But she was disappointed when firms offered her a job and refused to make a commitment on the department she would be in or the responsibilities she would have.

“GSK was clear about my role from the start”, she said. “They told me that they wanted me to be responsible for one area of the business and to draw upon my understanding as a person who is completely blind to carry out tasks that benefit patients”.

This includes developing Braille products and devices, as well as creating and constantly enhancing audio instructions.

“They told me that there were many things that I could do at GSK—things that only I could do, because of my background”, she said. “And that was the deciding factor in me joining the company”.

GSK is deeply committed to its diversity and inclusion (D&I) programme. According to Philippe Fauchet OBE, president and representative director of GSK, building an organisation that embraces differences will contribute to its success and sustainability.

The key, he added, is to develop a culture in which people with different ways of thinking and from different backgrounds are able to accept and respect each other. Those differences range from gender to race, religion, orientation, language, background and beliefs, as well as whether an individual is able-bodied or physically challenged.

Support for disabled members of staff includes the provision of state-of-the-art wheelchairs, special audio equipment and language translators operated by a user’s fingers for those with hearing difficulties, dehumidifiers for those with skin conditions; and high-resolution projectors for those with reduced vision.

GSK’s attitude is underlined by the statistics: in Japan, 50% of the firm’s board and 31% of corporate officers are women, and there are 45 staff with disabilities. In addition, the firm is seeking to employ disabled people aged over 60 as part of its Orange Senior Programme. To date, 12 male employees have taken, or are on, childcare leave, a figure incomprehensible at many Japanese firms. In 2014, 45% of staff used the firm’s Orange Day—a paid day off each year—to volunteer for a good cause. 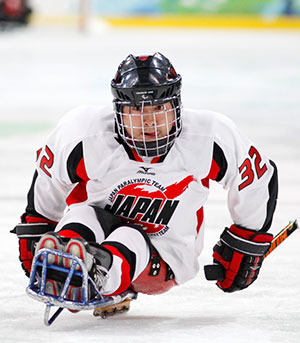 Uehara won a silver medal in 2010 for ice sledge hockey.

The firm’s commitment to D&I was also the deciding factor for Daisuke Uehara, who won a silver medal for ice sledge hockey at the Vancouver 2010 Winter Paralympic Games. He had been the top scorer for Japan four years earlier, at the Turin Games in Italy.

“When I was looking for a job, I focused on the type of work [I would do] rather than the type of industry, and I looked for companies that would hire me for a sales position”, said 34-year-old Uehara, who was born with a congenital disorder.

“But all the companies I approached implied it would be difficult to hire someone in a wheelchair”, he said. “GSK was the only one that said ‘We don’t have a sales representative in a wheelchair’, to which I replied, ‘Then I will be GSK’s first’.

Originally from Nagano Prefecture, Uehara works in the firm’s communications division and is in charge of internal communications and community partnership activities.

“I don’t need much support in terms of my working environment or equipment, but the company has assisted me with such things as ramps”, he said. “I would say that the greatest support comes from the consideration the company provides in terms of my work—so I can pursue my activities as an athlete—and during periods when I have to be away to play in matches”.

Uehara joined an ice sledge hockey team while at university, often starting training at 3am. As well as representing Japan, Uehara played for professional teams in the US before retiring in 2014.

Uehara said his ambition is to help to create “an environment in Japan that makes it easier for more children with disabilities to participate in and experience the joy of sports”.

“Ultimately, I also want to help increase the number of athletes and medal-winners in Japan”, he added.

It is both outside and within work hours that Akiyama and Uehara have had a great impact.

“They are motivated and inspiring members of the company, who contribute to its innovation agenda with their ideas and high spirits”, said Fauchet. “We are very proud to have them on our team”.