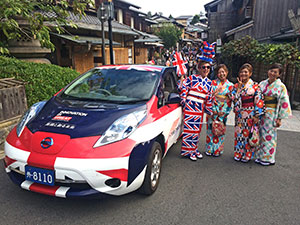 Diane Kichijitsu (left) was one of the drivers on the cross-country relay.

Wrapped from bonnet to boot in the Union flag, it is no surprise that the Nissan Leaf turned heads on its Japan road show. A symbol of a successful UK–Japan partnership, its striking imagery—together with social media details—was designed to attract attention and start conversations in the hope of sparking future innovation.

The roadshow was hosted by the British Embassy Tokyo and the British-Consulate Osaka over 11 days in September as part of the Innovation is GREAT campaign that had been launched in February by Prince William, The Duke of Cambridge.

“In the two years to 2014, sales from UK suppliers to UK [original equipment manufacturers] grew by £1bn, with 19% growth in 2014 alone. This presents a unique opportunity for businesses to invest into the UK supply chain”, he said, adding that the UK is the motors export gateway to Europe and the world. In 2014, over 78% of vehicles produced in the UK were exported to more than 100 countries.

Kawaguchi believes the UK’s position as the birthplace of the Industrial Revolution has resulted in its rich manufacturing heritage. And, with the UK’s globalised economy, it is one of the most innovative countries in the world.

“It is for this reason that Nissan supports Innovation is GREAT”, he said.

Having set up its UK operations in 1984, the firm has had a long and successful history there. With its Sunderland plant—the largest manufacturing site in Europe—having received a £100mn injection for the production of the next generation of the firm’s Juke Crossover model, this trend looks set to continue. The move secured the plant’s position beyond 2020 and will support more than 6,000 jobs.

The compact hatchback is the firm’s first electric battery vehicle, which produces no greenhouse gas emissions, and has been manufactured in Sunderland since 2013.

Affectionately named Sir Winston following a Name the Leaf competition that attracted more than 100 entries, the vehicle left Tokyo for Kanagawa Prefecture before travelling to Kyoto, Osaka and Kobe. Along the route, the team visited the Nissan Technical Center, as well as a number of British firms and Japanese suppliers.

Among the drivers taking part in the cross-country relay was Osaka-based rakugo (comic storytelling) performer Diane Kichijitsu from Liverpool.

“There was a great reaction from people everywhere we went”, she told BCCJ ACUMEN. “So many people told me how much they love Britain”.

Kichijitsu was pleased that the initiative showed the old meeting the new. “There were plenty of great opportunities to show a modern Nissan car looking very British in a traditional Japanese setting”, she said.

Also tapping into the UK’s reputation for innovation is Jaguar Land Rover, which presented eight of their newest models at the 44th Tokyo Motor Show in October and November.

Showcasing their three royal warrants, iconic images of London, and a Union flag, the stand focused on the firm’s British heritage. That is particularly fitting this year, as Land Rover marks its 45th anniversary and Jaguar celebrates 80 years of business. 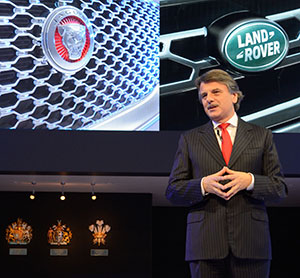 “This stand is British ingenuity at its best”, said Dr Ralf Speth, chief executive of the firm. “Since the Industrial Revolution, Britain has always been an innovation-led nation”.

According to Speth, this British innovation is at the heart of everything Jaguar Land Rover will do in the future, helping them deliver products that do more than offer a great driving experience.

“We know that autonomous vehicles will play a crucial role in the industry and we are developing exciting products to keep us at the forefront, including the world’s first autonomous off-roader.

“We want the technology in our cars to be like a discreet on-board butler, taking the grind out of the daily drive to work”, he added.

Described by Speth as a “radical new Jaguar” and a “family sports car”, the F-PACE features the global debut of the Jaguar Activity Key: Jaguar’s first wearable technology. The waterproof, shockproof wristband has an integrated transponder system that allows the key fob to be locked inside the vehicle, making life easier for sports people such as surfers and skiers.

Pointing out that the firm does not aim for volume, but rather concentrates on the quality of the customer experience, Speth said that of the mere 2,000 units on sale worldwide, 50 are available in Japan.

The firm is delivering a combination of the best British design, pioneering research and creative engineering, he added, pointing out that the cars are cleaner, greener, safer and better to drive than before. 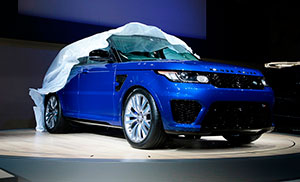 On unveiling the Range Rover Sport SVR, Speth said it was “truly worthy of a James Bond movie”—a nod to its use in the latest film of the series, Spectre, which had its world premiere in London.

Also featured in the film is the DB10 from Aston Martin, another iconic British brand. Speaking in Tokyo in October, Chief Executive Andy Palmer recognised the importance of James Bond to Aston Martin—an association that, beginning in 1964 with the film Goldfinger, has continued until today.

But it is not only firms that have grasped the potential of Spectre to promote their goods and services. In recognition of people’s growing desire to experience what they see on screen, VisitBritain has launched a global Bond is GREAT campaign to boost inbound tourism.

The Tokyo office, in partnership with Sony Japan, sent an influential YouTuber to London in September. As part of the press visit, delegates travelled in the Range Rover Sport SVR and test drove an Aston Martin. They also had a tour of the film’s locations, including Blenheim Palace and the River Thames, and were taught how to mix the perfect Martini—Bond-style.

The UK’s culture and heritage, particularly its domestic film industry, is one of the main attractions for global visitors, who spend £26.2bn a year in Britain.