When Matthew Broadway first arrived in Tokyo in 2008 to join Dyson K.K., he had the formidable task of taking market share from Japan’s massive and entrenched home appliance manufacturers. By the time he left in late 2011, he had done just that.

Four years later, he is with a firm that produces an eye-catching new product—but he is tackling the Japan market with just the same amount of gusto.

“Personally speaking, I’m delighted to be spending time in Japan again and I’m very excited to be back with a product that I have high hopes for in this market”, he told BCCJ ACUMEN.

UK-born Broadway is now chief operating officer for Netatmo, a Paris-based firm that is a specialist developer of connected home-use products, including systems to monitor the quality of a home’s living environment as well as connected heating control solutions. 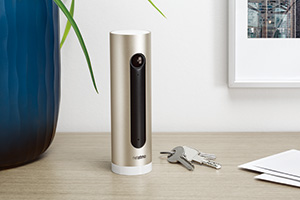 The camera is slim and compact.

But it is the firm’s latest system—the Netatmo Welcome—that has been attracting attention since its unveiling in France on 11 June.

The device links a high-definition video camera positioned in the home to the user’s mobile device, providing real-time images from inside the property.

Other firms produce similar products, Broadway admits, but he believes the Netatmo Welcome has a secret weapon in the battle to ensure home security.

It is the first device developed for the consumer market to apply advanced face-recognition software. That gives a home owner the ability to check that an elderly member of the family is safe and well, see what the children are getting up to, and make sure that the cleaner arrives on time.

Even more important, it will send an immediate alert to the user’s mobile phone or data device should it determine that an unknown person has entered the home. And, fitted with 1,080p full HD resolution and night vision, there is very little that escapes Welcome’s gaze.

Security-conscious French consumers were quick to identify the possibilities of the Netatmo Welcome, with the firm taking orders for 14,000 units in advance of it going on sale, while the entire stock held by the local arm of Amazon sold out within one hour of becoming available.

Broadway believes demand could be comparable in Japan, where the system was launched at an event at the French Embassy in Tokyo on 22 June.

“Up until now, this sort of face-recognition technology has been the preserve of governments, security services and major facilities such as airports”, said Broadway, adding that the firm has been developing its Welcome system for more than two-and-a-half years.

“No one has been able to develop the technology at the same time as keeping development costs within acceptable levels, so this is an enormous breakthrough”, he added.

Another advantage is that the system is remarkably straightforward to set up and use, Broadway said.

The owner of the house starts the process by recording an image of each person who is expected to be in the house at any given time, ranging from the parents and children to the babysitter, gardener and even dog-walker. A profile is then generated for each of those individuals and the face-recognition system automatically identifies each person when they are in the house.

Netatmo recommends that the camera—slender and unobtrusive—be positioned to monitor the primary entrance to the home, so it can record details such as the time a person arrives and departs, and store video of their movements in the home. 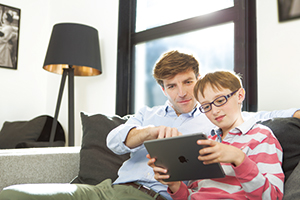 The Netatmo Welcome can be customised for each family member.

Alerts are sent to the user, who can customise the system so that it ignores unimportant developments, such as the children leaving for school. That tailoring of coverage ensures complete privacy for trusted members of the household, but the response is instantaneous when the system detects a face that it does not recognise. An urgent alert is sent to the user’s mobile phone, enabling them to call the police if the property has indeed been broken into.

Unlike rival systems, Welcome stores all the data in the camera itself, instead of using the cloud. This is designed to ensure better privacy and security while reducing costs.

“The system is really useful in a whole host of ways”, said Broadway. “It’s great for working parents who want to be sure that their children are home from school. It gives peace of mind.

“It’s also extremely useful for people who are caring for elderly relatives and want to be able to make sure that they are safe”, he said. “Then it can monitor when the cleaner has arrived, that the babysitter is present, and so on.

“But also, for a person like me who is away from home on business a great deal, it allows me to see what my wife and daughter are doing in the kitchen, enabling me to share moments with them even though we are a long way apart”, he said. “It offers reassurance that everything at home is as it should be”.

With a price tag of ¥29,800, including no contract or subscription fees, the Netatmo Welcome is available through Japan’s main electronics shops including Bic Camera, Yodobashi Camera and Yamada Denki, as well as at Tokyu Hands, Loft and Amazon Japan.

And while he agrees that Netatmo is “a relatively unknown brand” in Japan, Broadway believes the firm’s products will swiftly develop a solid following.

“Japan is going to be an extremely important market for us”, he said. “We know that the Japanese are very keen to make use of the very latest consumer technology, they are very open to new ideas and technology and they are a nation of early adopters”.