True to his name, Dashing Blaze put in an impressive sprint out of the final turn at the Tokyo Racecourse to lift the 2017 Epsom Cup. The race is held annually in June to mark the collaboration between the British and Japanese racing worlds and serves to underline our shared love of the sport of kings.

The five-year-old colt, owned by Kenneth and Sarah Ramsey of Kentucky, was ridden to victory in the fiercely contested race by Suguru Hamanaka, wearing the distinctive racing silks of pink with a diagonal green stripe and yellow arm bands.

A field of 18 horses entered the 1,800-metre race on 11 June, with Dashing Blaze winning his owners a cool ¥41mn. In all, nearly ¥88mn was up for grabs in prize money, with Astra Emblem placing second ahead of Meiner Honey.

And with well over 34,000 spectators at the track, the Epsom Cup has become a firm favourite on Japan’s racing calendar.

“We started our ‘sister racecourse’ agreement with the Epsom Downs Racecourse in May 1983, the year that marked the 50th anniversary of the first running of the Japanese Derby”, said Kiyohiko Kakita, general manager of the Tokyo Racecourse.

“Britain is the birthplace of thoroughbred horse racing and The Derby is recognised as a race that symbolises that brilliant history and tradition”, he told BCCJ Acumen.

“And I think that we Japanese are sensitive to the traditions and cultures of other countries and have inherited some of those traditions.”

There are as many as 21,000 races held at 10 courses across Japan each year, with the Japan Cup the pinnacle of the sport here and, with a purse of ¥476mn, the richest turf race in the world. This year’s race was watched by 123,700 people.

The first horse race in Japan that adopted a clearly European format was held on drained marshland in Yokohama in the spring of 1862. The race was organised—unsurprisingly—by British residents of the port city, which had recently been opened to foreigners.

Four years later, the Negishi Racecourse was constructed as a more permanent venue for the sport, which was growing rapidly in popularity. Emperor Meiji attended races at Negishi—where the stadium still stands—on no fewer than 14 occasions. A second track was built in Kobe, another treaty port, in 1870.

The British royal family are also keen race-goers and the Queen’s horses have won more than 1,600 races, including all of the five British Classic Races bar one. Ironically, the one race her horses have never triumphed in is the Epsom Derby.

“There is no doubt that the noble image of ‘the entertainment of royalty and the aristocracy’ plays a very positive role in the reputation of horse racing in Japan”, Kakita said.

In Japan, the sport expanded again in the post-war boom years and The Japan Racing Association was established in 1954.

And the relationship was warmly reciprocated, said Tessa Day, a spokesperson for The Jockey Club in the UK.

“For many years, Epsom has run a Tokyo Trophy, initially at the Derby Meeting but more latterly in August”, she explained, adding that a small rose garden has been planted at the Tokyo course as a symbol of the two tracks’ close ties, while Jockey Club representatives have attended races in Tokyo in the past.

High hopes
Today, racing is going from strength to strength, Kakita said, with sales of betting tickets here having outstripped sales everywhere else in the world for many years. The major races have also benefited from successfully crossing over into popular culture from being purely sporting events, in much the same way as The Derby in the UK attracts punters on that one day of the year.

Globally, Japanese trainers have earned a firm reputation for being among the best in the business—with Dashing Blaze an example of that, as he was trained by Keiji Yoshimura despite being based in the US.

“The degree of activity on the world stage has a big impact on the popularity of the sport at home and I believe that the level of Japanese horses in recent years and their successes in high-profile events have been recognised”, said Kakita.

“And that means that I have very high hopes for more Japanese horses to be taking part in more big-name events in the near future, and that includes at Epsom and Royal Ascot”, he added.

The 2018 Epsom Cup race, held on 10 June, at the Tokyo Racecourse, was won by Japanese horse Satono Arthur. 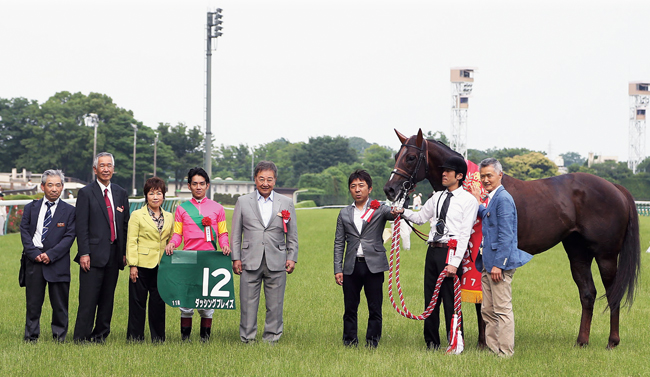 Dashing Blaze and his jockey pictured after the 2017 race.